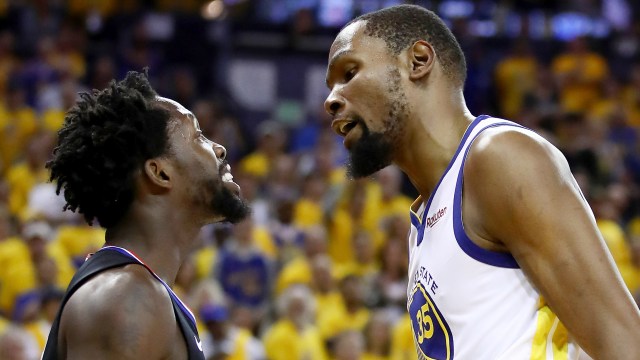 Did something go wrong for you today?

Not to worry, it’s all OK! There is someone to blame for your troubles, whether it’s your favorite fast-food joint being closed, your computer crashing, or disappointing things the government might do.

You can just #BLAMEKD — and voila, it’s off your mind!

While what we’ve said isn’t even remotely true, it’s always fun when the Twitterverse takes the proven formula to create some gold, which is beef + hashtag + ridiculousness = fun for (almost) all.

What is the #BLAMEKD hashtag and what’s it all about? Why has it been trending?

Let’s start at the top, then we’ll go a little deeper.

On Tuesday, NBA star (and occasional movie maker and burner account creator) Kevin Durant, also known as KD, met with the leadership of his current team, the Brooklyn Nets, to come to a resolution ahead of the 2022-23 NBA season.

More than a month prior, Durant had requested and damn near demanded a trade from the Nets, the team he willingly chose to play for, creating drama and trade discussions throughout August.

Then, when suddenly the Nets announced that both sides have decided to bury the hatchet and carry on with business as normal, another quasi-famous (and Twitter goldmine) NBA player, Patrick Beverley, responded to the announcement.

Beverley chimed in with some disdain and disappointment in the whole saga, saying in essence that the whole NBA world came to a halt, including free agency, because they were waiting to see how the Durant saga would play out — will he or won’t he be traded, and to where?

Beverley himself is waiting on a trade right now, and it’s true that moves that would regularly be happening came to a halt once Durant demanded a trade.

He wasn’t the only player happy to see the Durant drama come to a close (for now), as many players chimed in, including another free agent waiting to sign with a team, Isaiah Thomas, lending credence to Beverley’s claims.

In response to the Tweet, Durant himself quote-Tweeted Beverley with simply #BLAMEKD and the Twitterverse decided to have some fun with that.

Had a Lego-related incident? Well it must be that one dude’s fault!

Forgot to prep for today’s cookout? Why the hell didn’t KD remind you?

Lost some money? Guessed wrong on your bets? How dare ye, KD!?

Not your favorite day of the week? Blame calendar creator, KD!

Cereal not on the shelves at your shop? The makers must’ve been too busy refreshing their feeds checking on KD news.

Some folks forgot to officially #BLAMEKD but still, we know their true intentions.

Even the WWE got in on the action, quote-Tweeting itself about something not being fair.

Earlier this summer, Durant requested a trade from the Nets, even though he is under contract for four more years — a contract extension of his previous contract that technically has not even kicked in yet.

As Durant is one of the best players in the world, and it’s not the first time he’s grown unhappy playing somewhere (see: Oklahoma City and Golden State), it made teams both hesitant to give up a lot to trade for him and wary of trading for him only to see him grow unhappy again.

On top of that, a trade earlier this summer that sent Rudy Gobert from the Utah Jazz to the Minnesota Timberwolves resulted in a haul of assets for the Jazz much larger than basically anything the NBA had ever seen before. And Gobert is not nearly as good as Durant.

That meant teams needed to really, really, ridiculously overpay to trade for Durant.

It also meant that the asking price for other players that might be available for trade, including Donovan Mitchell of the very same Jazz, went way up thanks to Minnesota paying so much for Gobert.

On top of that, it meant Beverley, who was included in the above-mentioned trade, going from Minnesota to Utah, where nobody expects him to ever play because Utah wants to lose games and Beverley helps you win, was in a stagnant cycle of waiting. Most likely, some team would trade for Beverley, but everyone wanted to wait to see where the chips fell for Durant first.

Durant even pushed harder for the trade in a meeting with team owner and Ali Baba cofounder Joe Tsai, saying basically “it’s me or them” and demanding that both head coach Steve Nash and general manager Sean Marks be fired. Tsai called that bluff, tweeted support for both Nash and Marks, and a little bit later, the joint announcement from all sides via the Nets Twitter account came out.

The whole process led to the whole league stagnating, and someone who doesn’t mind speaking up, like Beverley, taking to Twitter right away to let the world know that Durant was to blame.

And that gave us KD’s response, in a typically sarcastic, understanding yet still deflecting tone, that he is to blame.

After Durant’s quote-Tweet response, Beverley responded back stating that he wasn’t even talking about Durant, but more so the process of everything it involved and the way it was handled.

This comes as no surprise, as Beverley loves to stir up some 💩 both on and off the court.

Check out this video from a couple years back, when both players were on different teams and both got ejected from a game for their back-and-forth.

Going even deeper, Beverley appeared on ESPN during this past year’s NBA Playoffs, and throw around a lot of criticism — most of actually warranted, and backed with insight and thoughtfulness.

To this, Durant chimed in as well. First, he tweeted a screenshot of a Kanye West tweet saying, “He running around like he pac,” essentially saying Beverley is talking bigger than he is.

Then a fan replied, “lol role players talking like all stars,” and Durant responded in kind once more, saying, “These guys need to stop.”

There’s no telling when Beverley and Durant might share the same court again, as we can’t be sure where exactly the former will suit up when the season starts, and for Durant, just because he says everything is hunky dory now, he easily could ask for another trade again anytime this season.