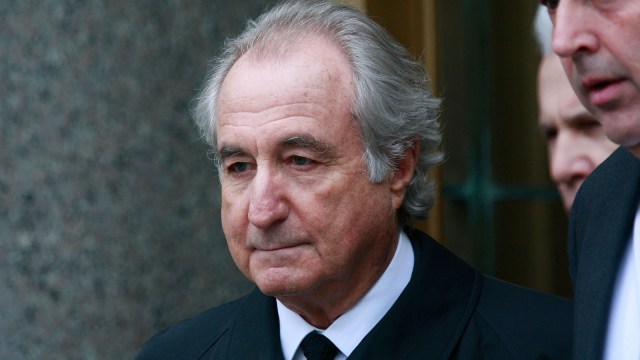 In late 2008, Bernie Madoff was arrested for orchestrating what is still the largest Ponzi scheme in U.S. history. Madoff was sentenced in 2009 to 150 years in prison for money laundering, securities fraud, and perjury, among other crimes. In addition to his sentence, the former investor was ordered to pay back investors $170 billion and the government seized his assets, including yachts, multiple homes, and jewelry, to make these repayments.

Madoff testified that his fraud began in the 1990s and he was caught after confessing his crimes to his sons, who promptly turned their father over to the authorities. In the decades Madoff ran his Ponzi scheme, he was able to con investors out of billions and it comes as no surprise that the rich and the famous were among his victims.

Let’s take a look at some of Madoff’s high-profile victims and their current whereabouts.

Steven Spielberg might be the biggest name out of Madoff’s estimated 40,000 victims. Spielberg invested on behalf of his charity the Wunderkinder Foundation, which primarily supports causes related to the arts — with an emphasis on theater and film — and other progressive causes, according to a comprehensive guide by Inside Philanthropy. It’s generally reported that the amount Spielberg lost was undisclosed but The Telegraph writes that the Wunderkinder Foundation lost approximately $340,000 to Madoff. Spielberg’s latest film, The Fablemans, will be released in theaters Nov. 23.

Kevin Bacon and Kyra Sedgewick are a Hollywood couple known to keep their personal lives generally private, but they were thrown into the spotlight when media reported the couple had lost nearly all of their money to Madoff’s scheme. The couple has spoken about the loss several times over the years, and Bacon recently talked about the ordeal on the podcast Smartless. Bacon said that he and his wife were “angry” over the loss but have recouped most of their money. The actor keeps it in perspective, saying, “There were a lot of people who were much worse off than we were – old people, people whose retirement funds were completely decimated.”

Fred Wilpon, the owner of the Mets baseball team from 1987 until 2020, was also tied up in Madoff’s scheme. Wilpon and Madoff had been friends for years and Wilpon’s involvement in the fraud is still debated to this day. Some media reports that Wilpon lost upwards of $500 million after investing with Madoff, and others report that the former Mets owner actually made $300 million from his dealings with the fraudster. Regardless of whether Wilpon knew of the scheme, his dealings with Madoff cost the Mets millions of dollars and Wilpon sold the team to billionaire Steve Cohen in the fall of 2020.

Noted talk show host Larry King was also among Madoff’s victims. King’s childhood friend Wilpon introduced him to Madoff when King and his wife were looking for a firm to invest in. When Madoff was arrested, it was reported that King had lost $700,000 in investments, but the talk show host revealed he had gained the money back in just a few short years after the scandal. King passed away in 2021 at the age of 87.

Madoff also swindled famed actress and socialite, Zsa Zsa Gabor, to the tune of an estimated $10 million. Today reported Gabor’s husband Frédéric Prinz von Anhalt was the first to notice the missing funds in early 2009. Forensics accountants attributed the loss to a third-party investment the couple had made with Madoff. Gabor passed away in 2016 and von Anhalt was not forgiving toward Madoff; when the former investor requested an early prison release due to his failing health, Gabor’s widower had some strong things to say about Madoff and his request, per this TMZ report.

Jeffrey Katzenberg is best known for co-founding DreamWorks Animation where he held the position of CEO until 2016. The Los Angeles Times reported that Katzenberg had lost over $20 million in investments made with Madoff. To add insult to injury, Katzenberg had never heard of Madoff until the scandal broke since his funds were invested by his business manager. Katzenberg described the ordeal as “painful and humiliating.” In recent years, Katzenberg created the short-lived streaming platform Quibi and continues to devote his time to philanthropy.

Eric Roth, a screenwriter known for his work on hit Hollywood films such as Forrest Gump and The Curious Case of Benjamin Button, was another of Madoff’s victims. Roth allegedly lost his entire retirement fund and filed a lawsuit against his investment advisor Stanley Chais, who died in 2010 before a proper investigation into his involvement with Madoff could be conducted. Roth continues to write for film, co-writing 2018’s A Star is Born and both installments of Dune.

Actor John Malkovich reportedly lost his life savings due to investments his business manager made with Madoff. Malkovich, who has appeared in over 70 films, was initially upset but said that he made up the loss by working tirelessly for years and changing his spending habits. In a 2020 interview with The Guardian, Malkovich told the publication, “I had to do more work that paid for a number of years, and work all the time. And I stopped paying for everything. I just stopped paying for friends and family for a time.” In recent years, Malkovich had a supporting role in Netflix’s Space Force and the prolific actor currently has around 8 projects in post-production.

Elie Wiesel lost a substantial amount due to Madoff. Wiesel and his wife, Marion Erster Rose, lost their joint savings as well as $15 million intended for their charity, the Elie Wiesel Foundation for Humanity, which was founded to fight inequality and intolerance. In 2009, CNN reported that Wiesel could not forgive Madoff for his crimes and called the fraudster “one of the greatest scoundrels, thieves, liars, criminals.” Wiesel, a Nobel Peace Prize winner, author, and Holocaust survivor, passed away in 2016. His widow Marion runs their charity as the founder and vice president along with their son Elisha Wiesel.