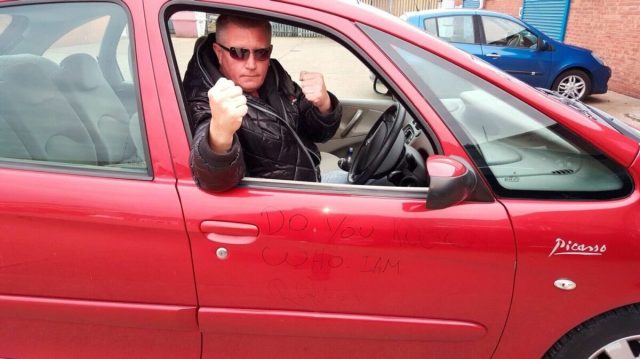 Some are born great, some achieve greatness, but others have greatness thrust upon them when indulging in a momentous moment of road rage that earns them internet immortality in the process. Such is the story of Ronnie Pickering.

On the fateful day of Sept. 21, 2015, Hull native Pickering saddled up to a moped driver while traveling through his hometown of Bransholme and proceeded to get into the mother of all swear-filled slanging matches. The ferocity of Pickering’s apparently unprovoked verbal attack on the hapless (and still unnamed) motorcyclist was notable enough, but the now-61-year-old grandfather cemented his status as a viral sensation with the immortal words: “Don’t you know who I am? I’m Ronnie Pickering!

Unbeknownst to Pickering, his actions were filmed by the other man’s GoPro camera, with the video later uploaded to YouTube. Within days, he had become social media famous, with his catchphrase immediately becoming a meme. It was basically the British, 2015 version of “It’s Morbin’ Time.”

Even now, seven years later, folks still haven’t forgotten the man, the myth, the legend that is Ronnie Pickering, with the video going viral once again on Twitter this Sept. 21 to mark the anniversary of what some now celebrate as Ronnie Pickering Day.

Pickering has even achieved a kind of Bloody Mary cult status among British motorists.

Let the remixes roll in.

No joke, he really does have his very own plaque.

Where is Ronnie Pickering now?

Not much is known about the humble beginnings of Road Rage Ronnie, but it’s believed that he’s a former amateur boxer, served in the Armed Forces, and is a taxi driver by career. Since 2015, though, Pickering has returned to the news several times, as Pickering has proven himself to be a natural at pulling off meme-able moments in his daily life.

Back in 2017, two years after making his name, Pickering grabbed headlines after playing hero by punching a man he believed to be a drug dealer after witnessing them harassing a female neighbor. Pickering pleaded guilty to the charge while appearing at Hull Magistrates Court and had to pay a fine of £100.

A year later, in 2018, Pickering found himself on the other end of a punch after he went viral again once a video of a local thug knocking him to the ground circulated online. The clip depicted the ex-road rager standing outside a pub for a smoking break when a man half his age assaulted him, although Pickering quickly dusted himself off and returned inside for another drink. He did not report the incident to the police.

Things seem to have calmed down for Pickering in recent years, with no other major viral events to his name, but he did reflect on his unexpected fame while speaking to The Mirror in 2020. He recalled:

“I had no idea it was being filmed and the first I knew was when a friend texted me and told me it was on YouTube. It then got picked up by the likes of UNILAD and it then became one of the country’s best known YouTube videos. I think that along with the original YouTube upload and all the other follow-ups and memes, the video has probably had 100m views. It is a bit crazy to think how many people have seen it.”

That said, Pickering resents how he comes across in the video, arguing that he wasn’t as much the instigator of the situation as he appears. He explained:

“People have rows like that all the time but they are not always filmed. The guy wanted a reaction and he got one. The video was heavily edited. The footage of him winding me up wasn’t there at all. He edited much of himself out and made it look like he was the victim.”

Whoever started the altercation, it’s clear who won it by dint of the fact that here we are, seven years later, celebrating Ronnie Pickering Day.