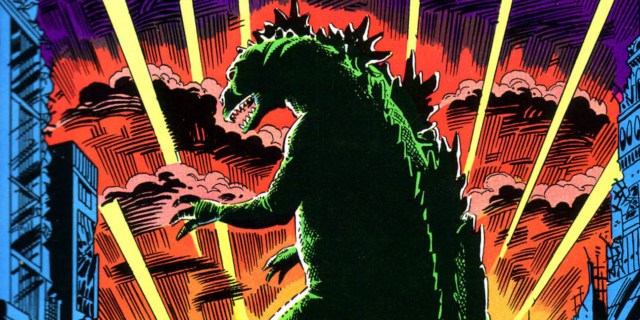 Image via Marvel Comics
Review of:

Godzilla, the king of monsters, needs no introduction. The towering beast has been in many movies, TV shows, and video games. However, he isn’t content with staying in his own universe. In fact, Godzilla once ventured into the Marvel universe, and he encountered many of Marvel’s most legendary heroes. Including an unlikely chance meeting with Spider-Man.

Why did Godzilla arrive in the Marvel universe?

While it may seem strange today, with the MCU being one of the biggest brands in media, Marvel used to make a lot of licensed comics, and often these licensed characters would crossover with their own home-grown ones.

In 1977, Marvel launched its Godzilla comic, which ran for 24 issues before ending in 1978. This comic is interesting for several reasons. First, due to the terms of the license Marvel had, they couldn’t directly reference any of the films. Because they only had the right to use Godzilla, not any of Toho’s other monsters.

Also, Marvel’s version of Godzilla is more aggressive and less intelligent than the one seen in contemporary films, feeling much more like the creature found in the original Godzilla movie from 1954. Rather than the sentient, heroic, and child-friendly version of the character seen in later films, like 1974’s Godzilla vs. Mechagodzilla and 1975’s Terror of Mechagodzilla. Plus, this comic predates the very campy Hanna-Barbera Godzilla cartoon, where Godzilla was a pure-hearted hero by only a year. Meaning that Marvel’s more monstrous take on the character was unexpected.

It should also be noted that when the comic landed on American newsstands in 1977, the Godzilla theatrical franchise was on hiatus. After 1975’s Terror of Mechagodzilla, the franchise wouldn’t be seen on the big screen again until 1984’s The Return of Godzilla. Meaning this was a very odd time for the Godzilla franchise in general.

This throwback nature is also evident in Marvel’s Godzilla design, as it looks like the original suit from 1954. However, the long claws and snout make it look more threatening and dinosaur-like, further pushing this idea of a more monstrous Godzilla.

What did Godzilla do in the Marvel universe?

The Godzilla comic starts with Godzilla bursting out of an iceberg near Alaska. It is never explained how he ended up in the iceberg (likely due to Marvel being unable to reference the movies), but once he gets out, Godzilla starts to rampage.

Of course, this gets the attention of S.H.I.E.L.D., who instantly task themselves with putting a stop to it. They send a helicarrier commanded by Agent Timothy “Dum Dum” Dugan to stop him. However, nothing Dugan does seems to hurt the creature. They deploy an experimental beam weapon created by Tony Stark, but all that does is annoy Godzilla more.

Thus, Godzilla sets off across America, leaving chaos in his wake. S.H.I.E.L.D. does its best to stop him, throwing everything at him. This includes Black Widow, Hercules, Iceman, and Angel (who at the time were part of a team called The Champions or Champions of Los Angeles), the Fantastic Four, Devil Dinosaur and Moon-Boy, and even the entirety of the Avengers.

Plus, Godzilla also does battle with a legion of other Marvel-original kaiju. This includes Batragon, Ghilaron, Lepirax, and Centipor, a faction of monsters created by geneticist Doctor Demonicus. There was also a giant yeti-like being called, Yetrigar, and as is Godzilla tradition, alien factions consisting of Beta-Beast, Rhiahn, and Krollar.

This series also saw the debut of Red Ronin, a giant robot character. Introduced as a foe for Godzilla, the character would appear in many comics after this. Acting as a foe for the Avengers and Wolverine.

However, the most famous crossover comes in Godzilla’s last issue. Spider-Man turns up just as Godzilla is driven back to the sea for the last time. Spider-Man notes he is late to the party but takes a picture of Godzilla for the Daily Bugle. Parker’s absence during Godzilla’s attack on New York is a running joke during the last few issues of the comic. Many panels show J. Jonah Jameson demanding to know where Parker is and why he isn’t turning up to get pictures. It is unknown if this was just an excuse to include Spider-Man in the comic without having him lose to Godzilla or if it was a tease for a future storyline.

However, this wasn’t the end of Godzilla in the Marvel universe. Even though Marvel lost the rights to use the character, they would reuse him in Iron Man 193, 194, and 196 in 1985. However, Marvel was a little cheeky, as the being is never called Godzilla. Plus, in the storyline, it is said that Doctor Demonicus captured the creature off-screen and mutated it. Meaning that this new Godzilla looks a lot like a giant sea monster rather than the beloved kaiju.

This mutated version of Godzilla would also appear in 1985’s The Thing #31. However, this was the end for Godzilla in the Marvel universe. While characters have referenced Godzilla after these comics, they tend to mean the monster from the films rather than the monster that battled Marvel’s biggest heroes.