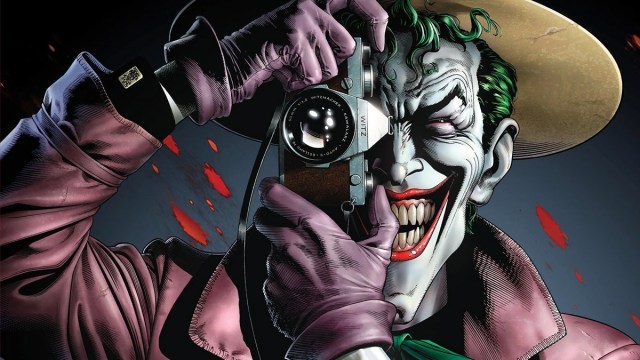 Despite clashing for over 80 years, Batman and his arch-nemesis, the Joker, are recognizable as the enemies who first met in 1940.

The Clown Prince of Crime arrived in Batman #1, darkly plotting in a lair, his distorted face twisted down by Bob Kane’s distinctive pencil lines. On that debut, he blackmailed high-profile targets, left a playing card at the scene of assassinations, and notably gained the upper hand in his first fight with the Caped Crusader.

Batman and Joker soon established the most enduring rivalry in DC Comics and a stalemate that keeps on giving, from the shadows of Gotham City to Multiverse-threatening crises. Batman can never break his primary vow and take the life of his indiscriminately homicidal foe, and the Joker couldn’t exist without his nemesis around to stop him. Over the years, comic creators have had great fun exploring both sides of the equation. They’ve found ever more terrifying depths to the grinning villain while exploring his shifts in personality and anonymity through classic comic arcs.

Some of the biggest names in comics have picked their moments to get inside the villain’s implacable mindset and prove his enigma. Like his enemy, Joker has become a pop culture icon outside comics and made a good claim to being one of the greatest villains in fiction. There aren’t many bad guys who can rake in over a billion at the global box office headlining an R-rated movie.

Over the years, creators have found ever-depraved ways to ensure Gotham’s premier clown remains Batman’s most dangerous and unpredictable foe. Here are 10 of Joker’s scariest moments from the comics.

Beating and killing a Robin — A Death in the Family

The Joker has enjoyed many infamous moments in comics, but few are as devastating as when he killed a Robin.

Jason Todd, the successor to Dick Grayson’s Boy Wonder, had proved controversial with readers. DC’s decision to have readers vote on whether Todd survived the story was a neat promotional trick. Still, the publisher surely didn’t expect them to sign off on the Joker’s grimmest assassination. It fell to veteran comic creator Jim Starlin to take Todd on a globe-trotting search for his birth mother before a horrific final meeting with the Joker, who had torture on his mind and a crowbar in his hand.

When the Batman Who Laughs later arrived as the Dark Multiverse’s solution to the stalemate between the Joker and Batman, his twisted Robins were an example of the extra dose of masochism in the fallen Batman’s Joker venom. They only say one word, “Crow,” as in crowbar.

Brian Azzarello and Lee Bermejo’s Joker wasn’t a response to Heath Ledger’s devastating take on the character in 2008’s The Dark Knight, but it was an uncanny coincidence both presented a similar Joker with a more realistic and darker edge.

In one gruesome scene that showcased the Harlequin of Hate’s ongoing obsession with body horror, he skinned a poor dolt called Monty in revenge for being double-crossed. Joker then paraded him at a strip club.

Having the final say on the Multiverse — Infinite Crisis

Infinite Crisis was a sequel to DC’s classic Multiversal break-down, Crisis on Infinite Earths. The epic crossover showcased many villains, but one was conspicuous by his absence. Gotham’s clown arrived at the end to provide the punchline and make it clear how he felt about being left out of the grand scheme set in motion by the corrupted Alexander Luthor of Earth-Three.

It was a savage assassination in which he ambushed Luthor, burned half his face off with acid, electrocuted him, and blasted him with a shotgun. As the more familiar and willing witness, Lex Luthor pointed out that not letting Joker play is stupid.

Alan Moore and Brian Bolland gave us one of the most iconic and horrific visions of Joker in their classic one-shot. It’s the glint in the eye, the ambiguous tragic back story, and the mirrored relationship with Batman. It’s also a Joker ready-made for the harder-edged comics of the late 1980s.

In some of DC’s most horrifying panels, the Joker shot and paralyzed Barbara Gorden as part of his plan to drive her father, Commissioner Gordon insane. Presumably, he didn’t know he was salting her career as Batgirl just two years after killing a Robin, but you can never really tell. There’s ambiguity in the Joker’s attack after its shocking opening—just like the graphic novel’s conclusion—but many Batfans are convinced this is the Joker’s darkest hour.

Joker’s abusive and coercive relationship with Harley Quinn didn’t get any worse than in the pages of Suicide Squad. Various attempts to prove his twisted love for her see Joker setting her beloved hyenas on her, forcing her to kill them, before torturing her in a dungeon littered with the corpses of the “others,” anonymous women in the costumes of Harley. That might just have been the final nail in their relationship.

Attack on the GCPD — Death of the Family

Joker’s return to Gotham during Scott Snyder’s definitive run is one of his most chilling entrances. Snyder had clearly anticipated the arrival of Batman’s premier villain, and his arrival didn’t disappoint. Hunting down his severed face, which he’d asked his Arkham-mate Dollmaker to remove earlier in the New 52 continuity, the Joker ruthlessly and creepily assaulted GCPD. Joker found his missing visage, which remained in excellent condition, but he killed 19 police officers and made countless new enemies in uniform on the way. Things get decidedly creepier when he sets up a new home in the Batcave.

Grant Morrison’s experimental novella, The Clown at Midnight, was a divisive and chilling attempt to get into the mind of the Dark Knight’s nemesis. Over 20 illustrated pages, Morrison explored the concept of a clown supervillain who reinvents himself on a cycle. By this point, his grin had been fixed by surgery to repair a gunshot wound, leaving him unable to speak. Silently pulling the strings from Arkham as he waits to transcend humanity, Morrison paints a calculating, strategic villain with his mind on the past and future.

It turns out one thing scarier than a Joker who laughs all the time is one who doesn’t say anything.

Out for a slayride — Detective Comics #826

Paul Dini has penned some of the most delightfully dark Joker stories, particularly for the iconic Mark Hamill-voiced incarnation in Batman: The Animated Series. His brilliant run of short stories for Detective Comics featured this classic that threw together the clown and the Boy Wonder in his Tim Drake incarnation.

When Robin escapes some vicious drug dealers by catching a ride in a passing car, it’s bad luck the Joker’s driving. He embarks on a murderous tour of Gotham with his captive witness. Dini takes a moment to refresh what Wayne, Grayson, and Drake think of the villain. Robin’s solution shines a light on the mix of dark, light, simplicity, and complexity in the Joker, involving classic comedy movie quotes and a traffic accident no ordinary man could survive.

The Joker hates to miss any attempt to destroy Batman and has been known to take revenge on anyone who fails to invite him. It’s almost like he enjoys the buzz of their inevitable failure. Head of the Black Glove, Dr. Simon Hurt got a lot right in his intricate plot to take down Batman once and for all, including recruiting Joker from Arkham Asylum. He’d clearly been reading up on the Dark Knight’s history.

The Joker’s role in the psychological and physical disintegration of Bruce Wayne found Joker as the pinnacle of Grant Morrison’s reborn clown, complete with a bullet hole in his forehead. His deranged moments included bifurcating his own tongue to give himself a more reptilian charm. If only Hurt hadn’t made the fundamental mistake of calling the clown his “servant.”

The comics have explored what the final days of Batman and Joker could look like through parallel worlds and alternative timelines. Frank Miller’s dystopian opus presented a bitter and withdrawn Bruce Wayne who stopped crime-fighting after Jason Todd’s death. The Joker remained in a coma while Batman was retired but woke when the grizzled Dark Knight reemerged.

Miller’s Joker is a dapper and formidable physical presence, and when he commits a broadcast mass murder, Bruce Wayne swears to take him down once and for all. When the Dark Knight paralyzes the Clown during their final fight, Joker ends his life as an expression of his disappointment in his sworn enemy.