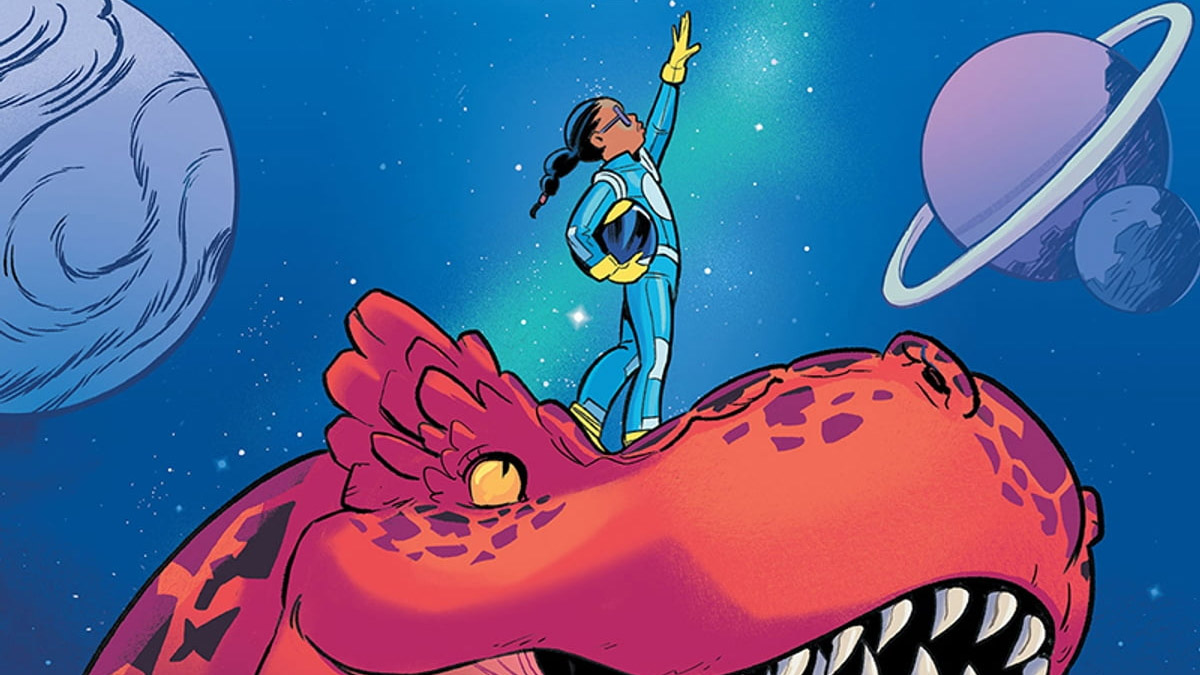 While we are still waiting for many famous Marvel faces to appear in the MCU, Disney continues to mine their phenomenally successful comic studio for lesser-known characters with the power to astonish.

Marvel’s Moon Girl and Devil Dinosaur is a new animated series arriving on Disney Channel in February 2023 and on Disney Plus soon after. It’s a fun title for what promises to be a fascinating series, picking up the characters from the pages of a Marvel Comics series. This duo has an excellent pedigree and the potential to play a significant part in the MCU, so if you’re unfamiliar with them, we’ve got your back.

Who are Moon Girl and Devil Dinosaur?

Lunella Lafayette is a 9-year-old science prodigy who earned the nickname from her jealous classmates. She first appeared in Marvel Comics in 2015, created by Brandon Montclare, Amy Reeder, and Natacha Bustos. Little did Lunella know in that first issue that her nickname was one sign she was taking on a significant legacy left by Moon Boy.

Moon Boy and Devil Dinosaur were the inventions of legendary creator Jack Kirby in 1978, during his return to Marvel Comics after a six-year stint at DC that saw him create the entire Fourth World mythology. Kirby’s incredible imagination for cosmic realities and linking the ancient past and far future didn’t dim. Moon Boy was a fur-covered member of a tribe known as the Small-Folk, who lived in the Valley of the Flame on Earth-78411, also known as Dinosaur World.

When Moon-Boy encountered his tribe’s sworn enemies, the Killer-Folk terrorizing a female dinosaur (a Devil-Beast), he saved one of her hatchlings. When the Killer-Folk tried to burn that T-Rex-like dino, its scales turned to a stunning bright red, and Moon Boy named his new friend Devil. Those events led him to be exiled from his tribe, so Moon Boy and Devil Dinosaur left to wander Dinosaur World on adventures that even dragged them over to Earth-616.

Over the years, the unlikely pair met Ghost Rider, Howard the Duck and battled Hulk before helping Skaar during an extended stay in the Savage Land. Devil even took on Godzilla during one impressively high-concept kaiju crossover.

The smartest person on Earth-616, explained

It looked like the duo’s adventures ended in 2015 (Earth-616 time) when Moon Boy was captured and, really horrifically, beaten to death by the Killer-Folk. He and Devil Dinosaur had attempted to retrieve a Kree Omni-Wave-Projector they called the Nightstone from the tribe. When the Nightstone opened a portal to Earth-616, Moon Boy’s final wish was for his great friend to pursue his enemies through the portal, retrieve the artifact and get revenge.

That portal led to present-day Earth-616, where Lunella came into possession of the Omni-Wave-Projector at the same time she realized she possessed the Inhuman gene. Fearing she’s become a monster when exposed to Terrigen Mist — the method by which Inhumans assume their true form and gain superhuman abilities — she hoped to remove the Kree DNA using the alien technology.

She was soon swept up in Devil Dinosaur’s rampage through New York as he pursued the Killer-Folk and felt guilty when the Hulk arrived and restrained Devil. At that time, the Hulk was Amadeus Cho, who called her the “smartest person in the whole world” when she passed Bruce banner’s intelligence test in a breeze. Lunella duly seized her former nickname with pride, becoming Moon Girl as she rescued Devil Dinosaur and unwittingly exposing herself to Terrigen Mist as she did. Moon Girl didn’t physically transform but fortunately gained the ability to swap consciousness with Devil Dinosaur, forming a new unbreakable duo in the Marvel multiverse.

The big players in the Marvel Multiverse

Moon Boy was a mutant on his planet, with psionic abilities that allowed him to communicate with his big red pal. Moon Girl is a natural successor, enjoying a literally inhuman relationship with Devil — she can even talk when she’s in the dinosaur’s body. The cost is that Devil’s consciousness is in charge of Lunella’s body simultaneously: disorientated, feral, and prone to all manner of dangerous and comedy situations.

The pair remained on Earth-616 and have met many major Marvel players over the past half-decade. The two have battled Kid Kree, Mole Man, and broken up a scrap between the Thing and Hulk. Moon Girl’s impressive intellect attracted the attention of Doctor Doom, who naturally sought to prove himself superior. They also teamed up with fellow prodigy Riri ‘Ironheart’ Williams and the Avengers. At one point, while the pair temporarily joined the Fantastic Four, Moon Girl found time to travel back to Dinosaur World to save Moon Boy and paradoxically reunite the original team. Good for all of us, Devil soon returned to Earth-616 to continue the adventures with his new partner that are now making the jump to TV.

The animation of Moon Girl and Devil Dinosaur

You can see the potential for Lunella Lafayette and Devil’s Dinosaur in the lively new Disney animation. A fresh take on Kirby’s legacy that plays out themes of beauty and beast, brute force and superintelligence, and all the brains and brawn needed for memorable superheroic scraps.

As suits the comics’ rich legacy, the new animation will use different animation styles that reflect the location and history of the concept. Like the comics, New York will play a big part, with this telling of the story having Moon Girl accidentally summon Devil Dinosaur to the Big Apple. Sequences set in the city draw on graffiti artists and pop artists like Andy Warhol. Expect musical, flashback, and action sequences to mix up the style to mimic a moving comic book. A hand-drawn and energetic feel is hoping to capture the 1970s comic books that first brought us Devil Dinosaur.

The cast bringing the comic to life includes Diamond White as Moon Girl and Fred Tatasciore as Devil Dinosaur. Supporting them will be Alfre Woodard as Lunella’s grandmother and Sasheer Zamata and Jermaine Fowler as Lunella’s mother and father.

The series is happening thanks to a hefty dose of nostalgia when Laurence Fishburne met Marvel Studios to discuss a role in the MCU. Fishburne has appeared as Bill Foster in Ant-Man, but on seeing a copy of the new comic Moon Girl and Devil Dinosaur, he remembered the original comic from his youth. Fishburne pitched the series to Disney to bring the wonder and joy of those adventures to a new audience, with a young, intelligent African-American superhero at its center.

An exec-producer on the show, Fishburne’s contribution to the MCU may not end there. He’s been announced in the recurring role of cosmic trickster, the Beyonder on the show, which could have major consequences for the broader MCU.