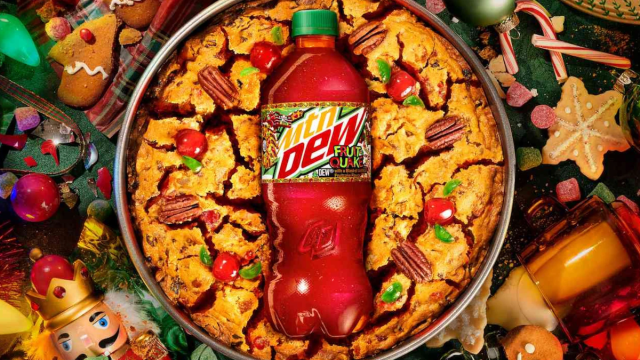 Image via Mountain Dew
Review of:

Mountain Dew is one of the most popular soda brands in the world. First hitting shelves in 1940, the brand has constantly reinvented itself, from embracing its status as the favorite soda of gamers to introducing a whole line of headline-grabbing limited-time novelty flavors. Over the years, flavors like Gingerbread Snap’d, Liberty Brew, and Cake-Smash have been released for short periods, generating a lot of buzz on social media.

This holiday season Mountain Dew is dropping a new festive flavor called Fruit Quake. And internet users are already debating if they want to try this new take on Mountain Dew.

What is Mountain Dew Fruit Quake?

“Celebrate the season with a blast of artificial fruitcake flavor!”

This new soda is trying to recreate the flavor of the already controversial Holiday fruit cake – a dense cake that usually contains a variety of dried fruits and nuts, which can include pecans, pineapple, cherries, and raisins. As well as a load of other different fruits.

How can you buy Mountain Dew Fruit Quake?

Mountain Dew Fruit Quake can be bought from the same retailers you regularly buy Mountain Dew from. However, as it is a limited-edition flavor, some stores might quickly run out – so you might need to try several outlets to grab some.

The Mountain Dew website also notes that you can order the soda online from several retailers, including Amazon, Walmart, Target, Instacart, Boxed, and Kroger – so, there are ways to get it if your local store doesn’t have any.

Mountain Dew Fruit Quake is offered in both 12-pack and 20-ounce bottle formats.

What does the internet think of Fruit Quake?

As with any limited-edition flavor, half the fun is seeing how different parts of the internet react to it – and several people have taken to social media to voice their opinions on the flavor.

Some are loving it, with many users in Reddit’s Mountain Dew subreddit and on Twitter praising the flavor, with many preferring it over previous holiday offerings. Though quite a few note it doesn’t top the old Merry Mash-Up flavor.

However, others are really disliking the flavor. Many internet users are posting that they find the flavor disgusting and strange. With some arguing that it doesn’t taste like fruit cake at all.

Of course, like anything related to Mountain Dew, it has sparked several memes.

There is a possibility that Fruit Quake could follow in the footsteps of Sprite Cranberry and become a soda more known as a meme than a drink.