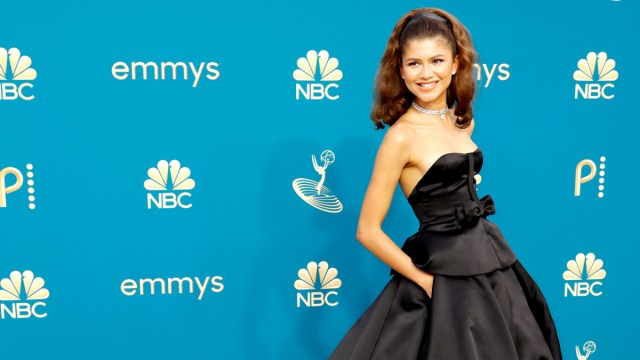 To the surprise of probably no one, Zendaya won her second Emmy award on Monday night for her raw portrayal of drug-addicted troubled teen Rue Bennett in HBO’s Euphoria. Her stiffest competition in the category was arguably Melanie Lynskey for Yellowjackets, in addition to fellow nominees Jodie Comer, Laura Linney, Sandra Oh, and Reese Witherspoon.

Zendaya first won the award in 2020 —since there was a nearly three-year hiatus between seasons 1 and 2 due to the pandemic — making her the youngest recipient of the Emmy for Outstanding Lead Actress in a Drama Series at age 24. And after taking the character to new depths in the second season, she is now the youngest two-time Emmy winner in the history of the awards show as well as the first Black woman to win lead actress in a drama series twice.

Her nomination was submitted for the bottle episode “Stand Still Like a Hummingbird”. The fifth episode of the second season sees Rue spiral after learning that her mother had flushed $10,000 in drugs that she owed back to the extremely sinister drug dealer Laurie (Martha Kelly), as she proceeds to lash out at her friends and loved ones over the course of an extremely chaotic night.

“To all the incredible actresses in this category, I’m so honored to be beside you,” Zendaya said onstage at the ceremony while accepting her award. “Thank you to the incredible cast and crew of Euphoria for making such a safe space to make this very difficult show, I love you all so much,”

She went on to thank the academy, her friends and family, and series creator Sam Levinson for “sharing Rue” with her, before taking her speech to sentimental territory.

“Lastly, I just want to say that my greatest wish for Euphoria is that it could help heal people, and I just wanna say thank you to everyone who has shared their story with me,” she continued. “I want you to know, that anyone who has loved a Rue or feel like they are a Rue, I want you to know that I’m so grateful for your stories, I carry them with me, and I carry them with her.”

In addition to Zendaya’s nomination, Euphoria was likewise up for Outstanding Drama Series and her co-star Sydney Sweeney also received a nod for Outstanding Supporting Actress.