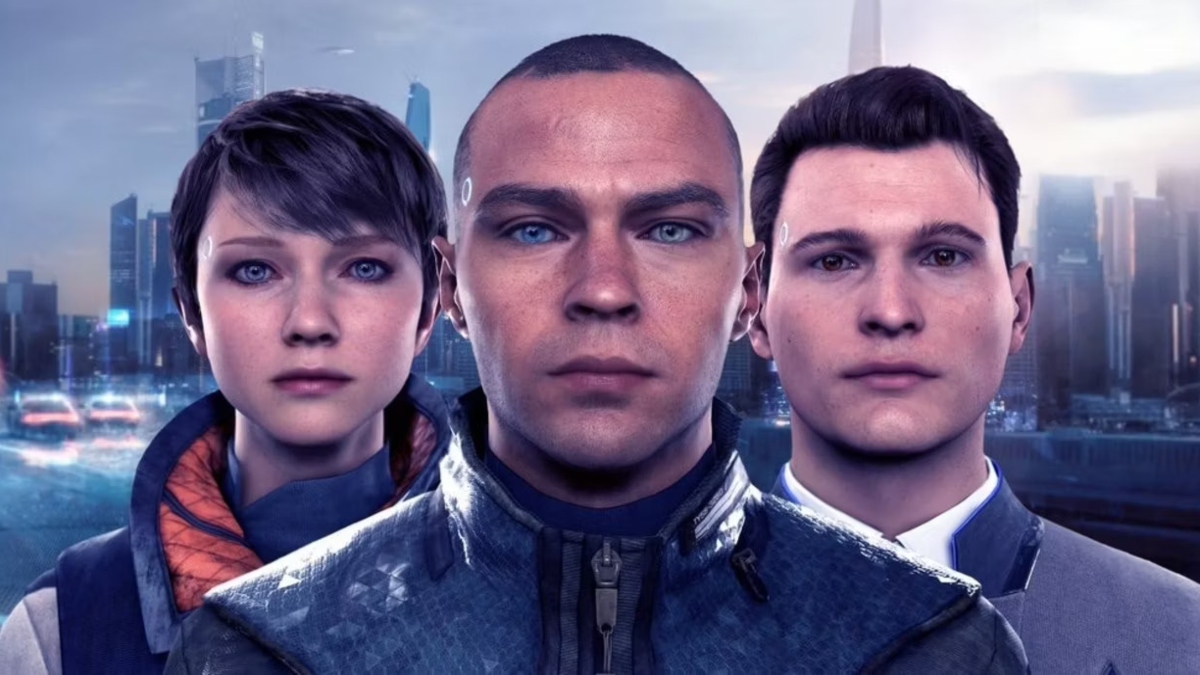 Released by Quantic Dream in 2018, the Playstation 4 exclusive Detroit: Become Human marked a whole new era for story-driven, choice-based video games. Set in a futuristic Detroit, Michigan, the game follows three androids — Kara, Connor, and Markus — who explore their newfound sentience after an android uprising encourages man-made machines to rebel against their creators. Kara (Valorie Curry) uses her free will to protect a young girl, Alice; Connor’s (Bryan Dechart) job is the hunt down deviant androids; and Markus (Jesse Williams) devotes his life to instigating a resistance and freeing other androids from servitude.

Based on Quantic Dream’s 2012 technology demonstration Kara (also starring Valorie Curry), Detroit: Become Human explores themes of slavery, civil rights, child abuse, and racial prejudice, all while testing the player’s political, social and moral beliefs. In Detroit: Become Human, which has 85 different endings, players control Kara, Connor, and Markus and must make informed decisions to further the plot. But Quantic Dream wasn’t the first — nor will it be the last — developer to utilize the choice-based mechanic that’s existed in video games since as early as the 2010s. If you enjoyed Detroit: Become Human, you’ll appreciate these like-minded titles with infinite replay value.

Supermassive Games is on the rise, what with its recent release The Quarry turning heads, but the developer — founded in 2008 — largely owns its success to Until Dawn, the stand-alone survival horror that inspired the now-famous Dark Pictures Anthology series. The studio’s breakout title focuses on eight teenagers, all of whom are trapped on a remote mountain retreat and find themselves hunted by a masked maniac and supernatural, cannibalistic Native American/ First Nations folklore entities known as Wendigos.

The group must survive until the cavalry arrives at dawn, fending off the many life-threatening monsters that want them dead. Even though it was released in 2015, Until Dawn remains as visually stunning now as it was almost eight years ago. The game features the butterfly effect mechanic, the phenomenon whereby the slightest change in a complex system can have larger, more disastrous effects elsewhere. Essentially, one wrong choice can drastically change the story, thereby dooming certain characters.

Prepare for a lot of Supermassive Games’ titles to be featured on this list; it wouldn’t be exaggerating to say that it’s the leading studio in choice-based horror games. It’s most recent title, The Quarry, follows the same premise as Until Dawn, except this time, players assume control of nine camp counsellors who must survive their last night at Hackett’s Quarry Summer Camp, all while fending off supernatural creatures and hostile locals. Again, players make choices throughout the game that can significantly alter the story, character development, relationships and the overall outcome.

All nine characters, just like Until Dawn‘s octuple, can survive or die depending on the player’s actions. If one couldn’t tell, The Quarry was envisioned as the spiritual successor to Until Dawn, building upon the foundations that were built way back in 2015. It also drew inspiration from slasher films Friday the 13th and The Thing, featuring an ensemble cast in Brenda Song, David Arquette, Halston Sage, Ted Raimi, Ariel Winter, Ethan Suplee, Lance Henriksen, Lin Shaye, Justice Smith, and Grace Zabriskie.

We’re deviating from the paranormal and focusing more on the mythological undead. For those who haven’t had the pleasure of indulging in The Last of Us, consider this a call to action. Developed by Naughty Dog, The Last of Us follows Joel, a smuggler tasked with transporting Ellie, a smart-mouthed teenager, across the United States to rendezvous with The Fireflies, a freedom-fighting resistance seeking to find the cure to the cordyceps, a parasitic fungal infection that’s plagued America for decades and turned decent folk into mindless Infected.

Since Joel lost his biological daughter, Sarah, in a freak accident while fleeing his hometown, it’s apparent that he and Ellie develop a father-daughter bond throughout the game that’s hard not to become emotionally invested in. The Last of Us isn’t choice-based like the others, since it’s pretty clear-cut as far as objectives and story, but it’s still one of the most powerful, heart-wrenching plots to ever grace our consoles. A sequel, The Last of Us: Part II, focuses more from Ellie’s perspective than Joel’s as she crosses paths with Abby, a solider locked in a conflict between the militia and a religious cult.

Surprise, surprise. Another Supermassive Games title! Little Hope (sadly) isn’t as popular as its successors, nor its predecessors, for that matter, so it’s generally considered the weakest of the Dark Pictures Anthology. That being said, it’s by no means bad. In fact, Little Hope probably has a much richer, historically-accurate plot than any other Supermassive Games venture. It’s easy to dismiss Little Hope because it’s largely forgettable, but history nerds will appreciate the callbacks to 1666, during the era of the witch trials in Britain and North American British colonies in which thousands of people — mostly women — were accused of witchcraft and either drowned, hanged, or stoned to death.

Little Hope follows four college students — Andrew, Taylor, Angela and Daniel — chaperoned by their professor, John, who find themselves stranded in the mysterious town of Little Hope, whereby the story switches between the modern day and 1972, where the character’s ancestors face punishment after being framed for practicing witchcraft by Reverend Carter. Unlike other titles, Little Hope only has seven different endings, but some of them are near-impossible to achieve without knowing several details ahead of time, so there’s plenty of opportunity to replay and relive Little Hope‘s tense and complicated story.

Kick-starting the Dark Pictures Anthology and predating Little Hope, Supermassive Games’ Man of Medan is arguably the weakest entry in the series, but that shouldn’t stop interested parties from checking it out. Released in 2019, Man of Medan is set in the South Pacific Ocean near French Polynesia and follows four college students — Alex, Brad, Julia, and Conrad — who embark on a diving trip along with the captain of the boat Duke of Milan, Fliss, in search of WWII-era remains.

When they encounter a confrontational group of modern-day pirates, the crew are blackmailed into sailing the seas in search of the “Manchurian Gold,” but instead stumble across a ghost ship, wherein they encounter disturbing visions of phantom-like creatures. Throughout the game, players can find “Dark Pictures” that provide premonitions of what may or may not happen depending on their choices. As expected, Man of Medan didn’t reach the same level of physical sales as Until Dawn, nor does it compare to the Dark Pictures Anthology’s later works, but it’s worth the experience nevertheless.

Developed by Don’t Nod Entertainment and Deck Nine and published by Sqaure Enix, Life is Strange is an episodic adventure game that eventually spawned several sequels and spin-offs. The game consists of five episodes that were periodically released throughout 2015. In a very Until Dawn-esque style, 18-year-old photography student Max Caulfield discovers that she can rewind time at will, thereby binding her every choice to the “Butterfly Effect” phenomenon. As we’ve established with these types of games, the player’s choices drastically impact the story, but Life is Strange allows for the shaping and rebuilding of the narrative as it unfolds using Max’s time-travel capabilities.

The Telltale Series — like the Dark Pictures Anthology — has several titles under its belt. The developer’s breakout game came in 2012 with The Walking Dead, consisting of four seasons and inspired by the hit television series of the same name. It introduced a more narrative approach to Telltale Games’ works, and utilized the point-and-click storytelling mechanic. In the years following The Walking Dead‘s success, Telltale branched out into other influential franchises, including Minecraft, Game of Thrones, Guardians of the Galaxy, and Batman.

Though not tied to any previous forms of media surrounding Bob Kane and Bill Finger’s Dark Knight, Batman: The Telltale Series focuses on Batman and his Rogues Gallery, namely Joker (John Doe) and Harley Quinn. Other antagonists featured include Two-Face, Penguin, Lady Arkham, Carmine Falcone, and Victor Zsasz. Batman: The Telltale Series borrows its art style from that of comics, using bright, bold colors and a pop-art effect reminiscent of Marvel’s Spider-Man: Into the Spider-Verse inspired by comic artists Jim Lee, Greg Capullo, and Neal Adams.

Featuring a stand-out performance from Elliot Page (who was, at the time, known as Ellen Page, before his transition), Beyond: Two Souls is an action-adventure game following Jodie Holmes, a gifted youngster inexplicably tethered to an otherworldly entity known as Aiden, a soul linked to Jodie’s since birth. Jodie possesses supernatural powers through her psychic link to Aiden and the story sees Jodie grow through adolescence while attempting to learn more about her connection with Aiden, as well as control it. Spider-Man‘s Willem Dafoe co-stars as Nathan Dawkins, a researcher studying Jodie and subsequently her surrogate-father-figure.

Considering that Beyond: Two Souls is another Quantic Dream title, there’s no closer match to Detroit: Become Human than this. All the controls are virtually identical, the stories unfold in similar ways and — once again — all choices are vital to the progression of the narrative and how it evolves. Although Detroit: Become Human might be Quantic’s most successful game to date, there’s no erasing prototype from whence it came in Beyond: Two Souls. Both Page and Dafoe are phenomenal, and there’s really nothing else to be said. Get your tissues ready.

Yet another Quantic Dream title and hands down the most gripping of them all, Heavy Rain wasn’t Quantic Dream’s first, but it’s easily the best. Omikron: The Nomad Soul (1999) put Quantic on the map, but it wasn’t until Heavy Rain debuted in 2010 that the studio began to gain a following. It’s no small feat for Heavy Rain to be considered one of the greatest games ever made, and it paved the way for Beyond: Two Souls and Detroit Become Human to soar in later years, Despite releasing during an age where technology was still finding its feet, there’s much to say about Heavy Rain‘s visuals, which still hold their own against more modern games — just as Until Dawn does.

Heavy Rain follows four protagonists — Ethan, Norman, Madison, and Scott — as they hunt down the Origami Killer, a serial murderer who uses periods of downpour to slowly drown his victims. The player controls all four individuals and reacts to on-screen prompts, as well as performing occasional quick-time events (QTEs). Like most other titles on this list, all actions have consequences. There’s a certain emotional impact to Heavy Rain that’s just hard to dismiss and even harder to replicate, no matter how advanced the software has become.

Frogwares brings us Sherlock Holmes: The Devil’s Daughter, an adventure mystery as part of the Sherlock Holmes video game series. Like Sherlock Holmes: Crimes & Punishments, its predecessor, The Devil’s Daughter involves examining crime scenes and uncovering evidence. Once found, clues are added to a “Deduction Board,” which allows players to piece together information and solve cases. Depending on the evidence found, players can come to different deductions, thus leading them to a culprit. They can either succeed or fail in catching the correct criminal.

Set in 1896, following the events of 2010’s The Testament of Sherlock Holmes, after Moriarty’s death, Sherlock is now in charge of caring for Moriarty’s daughter, Katelyn, all while Holmes’ new neighbor, Alice, causes emotional strain between the two of them. There are five cases to solve; Prey Tell, A Study in Green, Infamy, Chain Reaction and Fever Dreams, all of which reveal more secrets about Alice’s past and her true intentions.