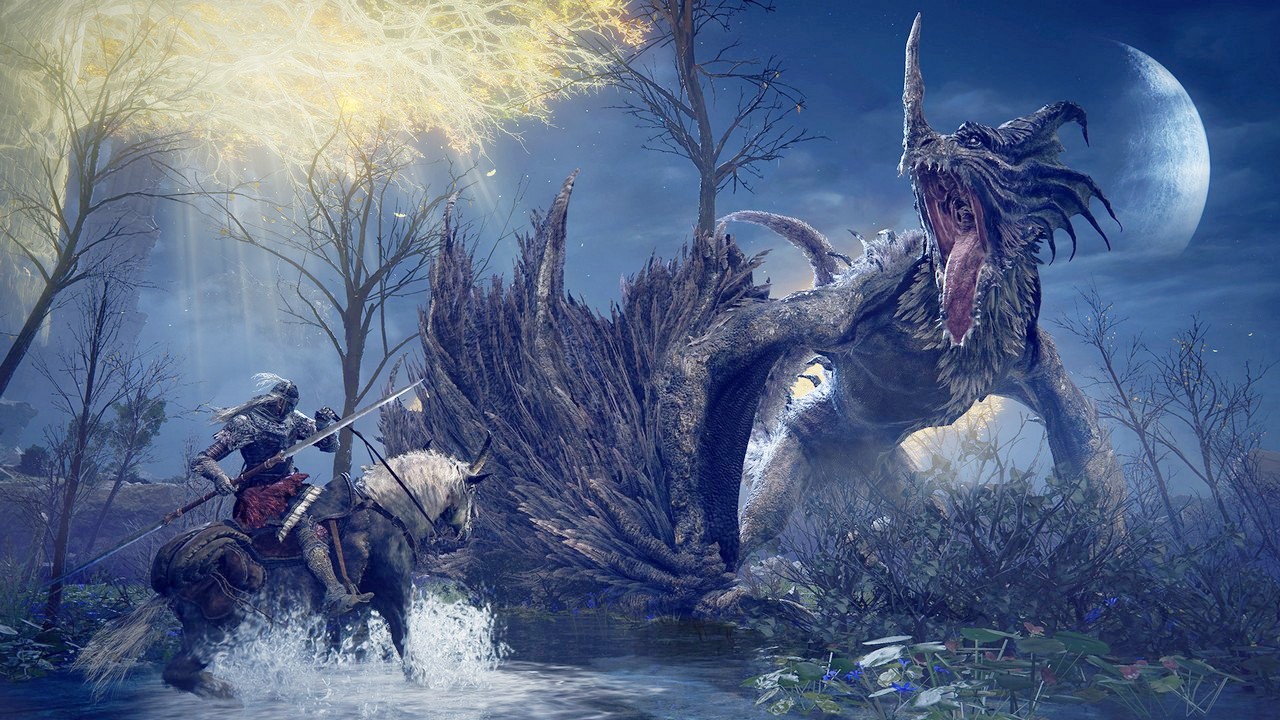 FromSoftware’s recently launched Elden Ring has exceeded all critical and demolished sales expectations. The barnstorming dark fantasy exploded onto consoles and PC and has now sold more than 13 million copies around the world (and that’s just as of March 31), meaning many players will be getting their first taste of the intimidating ‘Souls’ genre.

So, if you’ve been bitten by the Elden Ring bug, where should you go next to scratch the itch? You have a lot of options: FromSoftware’s previous works are the obvious choice, but there’s also the burgeoning ‘Soulslike’ genre. This loose term encompasses games clearly inspired by FromSoftware’s work, generally including lock-on melee combat, high difficulty, cryptic worlds, and minimalist storytelling.

Dark Souls is the obvious next best option, as in many ways Elden Ring is the unofficial Dark Souls 4. 2011’s Dark Souls remains the highlight of the series (particularly the 2018 remaster) with players around the world falling in love with its interlinked game world, unparalleled atmosphere, and notorious gallery of bosses.

2014’s sequel Dark Souls II is a bit of a curate’s egg, though it still has many fans for allowing extreme flexibility in character build and its killer DLC expansions. The tweaked Scholar of the First Sin version is the only version you should consider playing.

2016’s Dark Souls III combines everything they’d learned and brings the franchise to a nice thematic close with The Ringed City DLC. You can’t go far wrong with any of these games (all of which can now be had at budget prices), though bear in mind that the PC versions have had their online components disabled for security reasons and there’s no indication when they’ll return.

For many, Bloodborne beats even Elden Ring as the pinnacle of FromSoftware’s work. Miyazaki’s 2015 masterpiece, set in the faux-Victorian city of Yharnum, cranks up the combat speed, removes blocking and shields, and focuses on aggression and skill. It more than lives up to its sky-high reputation and if you’re a PlayStation 5 owner, it is available as part of the ‘PlayStation Hits’ collection included with the console. If you get it, don’t skip ‘The Old Hunters’ DLC, as it boasts some of the best bosses in gaming history.

The only caveat is that Bloodborne isn’t the best-optimized game around. Even on PlayStation 5, it runs at 30fps with frame-pacing issues, though it is far from unplayable. Fans have long been demanding a remaster or PC port, so it may be worth waiting to see if that campaign bears fruit.

2009’s Demon’s Souls is where it all began. Practically ignored at the time of its launch, it picked up a following purely on word-of-mouth and soon became a cult classic. The PlayStation 3 original is now somewhat obsolete and has long been exclusive to the creaky console, though this version will soon be available to stream on Sony’s revamped online offering this summer if you’re curious to try it out.

The real meat comes in Bluepoint Games’ incredible 2020 remake, which launched alongside the PlayStation 5 and remains one of the most graphically impressive games on the platform. With the original gameplay only slightly tweaked, Demon’s Souls is the gold standard of a remake and a must-buy if you want to show off what the current generation can do. And, though it’s much slower-paced than Elden Ring, it’s still a hell of an adventure.

Hidetaka Miyazaki’s other Souls games let you build your character and customize your playstyle. But that doesn’t happen in Sekiro: here you are Wolf, a katana-wielding Shinobi on a rampage of revenge through Sengoku-era Japan. Success rests on you mastering Wolf’s moveset, learning how to break enemies’ posture and deliver crippling deathblows. Sekiro is arguably the hardest game from Miyazaki — there’s no online co-op and little room to cheese bosses.

But Sekiro is a top-tier action game and worth trying even if you feel intimidated by its reputation. Just remember that speedrunners can complete this game blindfolded, so there’s hope for everyone.

Lords of the Fallen (PlayStation/Xbox/PC)

This 2014 title from Deck13 Interactive was the first ‘Souls-like,’ taking clear inspiration from Dark Souls and attempting to put their own spin on it. Results were mixed: Lords of the Fallen isn’t exactly a bad game, but it can’t ever escape the shadow of its influences and is unexpectedly easy once you’ve leveled up a bit.

In 2022, there are much better titles to spend your time with, so we’d skip this one.

Deck13 followed up Lords of the Fallen with 2017’s The Surge and 2019’s The Surge 2. These put a sci-fi spin on the Souls formula, with you customizing an exoskeleton for combat against various kinds of robots. Both games add some fun twists, including targeting individual components of enemies and interesting finishing moves. The downside is that the industrial environments quickly get repetitive and fighting robots simply isn’t as satisfying as dismembering fantasy monsters.

Of the two The Surge 2 is the better game, with a more interesting cityscape setting and improved enemy AI.

Now we’re talking. Team Ninja’s Nioh series put a wildly successful Japanese mythology spin on the genre. You play as William Adams, an Irish sailor inspired by the true story of one of the few Westerners who ever became a samurai. That’s where the historic accuracy ends, as Nioh sends you through a yōkai-infested Japan in pursuit of sorcerer Edward Kelley.

The first Nioh is great (especially the 2021 PlayStation 5 remaster), but 2020’s Nioh 2 improves on practically every aspect. Perhaps the only complaint is that this is a complicated series with a lot going on under the hood during combat. Doing well all but requires research to figure out the optimal way to take down bosses, but if you’re an Elden Ring veteran that shouldn’t be a problem.

Bandai Namco’s anime take on the Souls formula has become a true cult classic since its 2019 release. Set in a surreal post-apocalyptic future, you journey through a bloodstained landscape in an attempt to bring some order to the world. Aside from delivering a competent action-adventure game, Code Vein also features an excellent character creator and a tonne of clothing options, making it one of the best options for ‘fashion souls’.

If you can’t stomach anime you won’t get far here, but Code Vein is one of the finest imitations of what makes FromSoftware’s games so fun.

By 2019 Star Wars fans were hungry for a single-player adventure. They got their wish with Star Wars Jedi: Fallen Order, which came complete with a lot of Souls DNA. Some of the trickier edges have been sanded away in the hopes of mainstream appeal, but this game’s lightsaber combat can get tricky on higher difficulties. It also tells a fun Star Wars story, with fans quickly warming to fugitive Jedi Cal Kestis and adorable droid BD-1.

A sequel from the same team is now in development and will hopefully iron out some of the minor flaws that kept this from being a true classic. Fingers crossed they’re taking notes from Elden Ring.

This ambitious title from indie developer Cold Symmetry is a love letter to the Souls games and a hugely impressive feat for a small team. Rather than creating a traditional build the player switches between different ‘shells’ offering distinct playstyles, with the combat tending more to small-scale duels than large encounters.

Occasionally you can sense the budgetary restrictions, but Mortal Shell is a great game that frequently uses its limitations to its advantage. Even better is that it’s not particularly long, so if you need a quick shot of the Souls formula look no further.

March 2022 was probably the worst moment in gaming history to release a Souls-like, and Stranger of Paradise has been almost entirely swallowed up by the Elden Ring hype train. This odd collaboration between Team Ninja and Square Enix is a prequel to the original Final Fantasy, but the brash and violent style departs from the usual series tone and the gameplay has heavy Souls influences.

The result isn’t great, though the bonkers story carries it a long way. Stranger of Paradise pinching a lot of Souls games mechanics is proof of the genre’s massive impact on the gaming landscape. When a series as a venerable as Final Fantasy is copying your homework, you know you’ve done something right.

Even this extensive list can’t hope to cover every game paying homage to Miyazaki’s design ethos. In addition to these there are 2D games like Hollow Knight, Dead Cells, and Salt and Sanctuary that crib various elements, with bits of the Dark Souls genome making it into The Witcher III: The Wild Hunt, Nier: Automata, God of War, and the last three Assassin’s Creed titles.

So, if you’re a fan of Elden Ring, you’re spoilt for choice as to where to go next. Take care out there, adventurer.