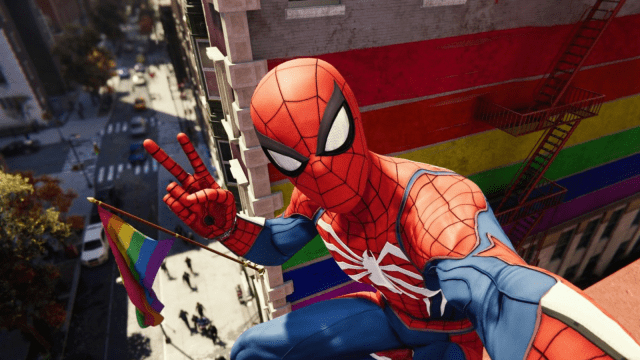 Spider-Man has just made its debut on PC gaming, with the much-loved PlayStation 4 title now available to even more gamers, but unfortunately the dark side of the internet has cast shadow on its release.

One of the many celebrated things about Spider-Man was its open world, packed with neat Easter eggs and touching details. Among those is several rainbow pride flags smattered throughout the game, which adorn town hall buildings. Spider-Man: Miles Morales also features many more, plus a few more pride flags.

But because of the way the internet is, a mod has been uploaded overnight that replaces all rainbow flags with that of the American flag. Titled “Non-Newtonian New York”, the mod has instantly caused outbreak on Nexus Mods. The cover picture for the mod essentially implies that there’s too many rainbows and pride in the game.

It was uploaded to Nexus Mods on Aug. 15, and has already seen 288 downloads in less than 24 hours. It’s become a hot button issue, as the comments section for the mod are littered with homophobia, “based and redpilled” comments, alongside people actively calling out the mod for being thinly veiled homophobia and fear of queerness.

Spider-Man as a character is the exact opposite to what this mod represents, and even in the two Spider-Man games by Insomniac he’s had lines calling out conservative villains, hate groups, and stood up for every New Yorker.

Insomniac has prided itself on inclusivity and has not been silent in their support for human rights, with the company previously having Black History Month celebrations alongside Pride Month. It’s disappointing that a mod like this gets created and celebrated, when the very inclusion of the flag is to show it’s a safe space.

UPDATE: Nexus Mods has confirmed to We Got This Covered that the mod has been taken down, and the user (as well as an alt account) have been banned, with a spokesperson saying that the uploader of the content “is no longer welcome on Nexus. “