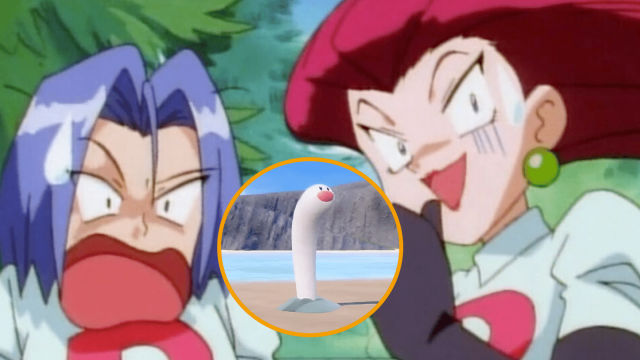 Although, Wiglett can stand a lot more erect, albeit with a slight curve, than a Diglett can. Naturally, fans on Twitter have started poking fun at it, as is often tradition when Pokémon variants are revealed.

Although Wiglett appears to simply be a colorless Diglett, it’s apparently distinct enough to be an entirely new species of Pokémon, and not just a regional spin on the ground-type burrower we’ve known since Gen 1.

For one thing, Wiglett tends to hang around by the water and can be seen burrowing in the sand. Secondly, Wigletts are evidently much longer than a traditional Diglett, as they are seen emerging a lot further out of the ground than we’ve come to expect. This has led to some disturbingly hilarious fan art.

Not much else is known about Wiglett besides its affinity to the ocean and elongated (and probably slimy) body, with no known evolutionary form for the Paldea-native burrower. Of course, as Pokéfans tend to do, they came up with their own takes.

Whether you love it or hate it, Wiglett is here to stay, and if it had arms, we bet it’d have a few choice gestures to make towards its naysayers.

Wiglett is just one of many new additions to the upcoming Pokémon Scarlet and Violet, the first truly open-world Pokémon mainline games, now entering its ninth generation. The game will see trainers explore the all-new Paldea region, and includes a number of different story arcs for players to pursue.

Pokémon Scarlet and Violet are coming to Nintendo Switch on Nov. 18, 2022.