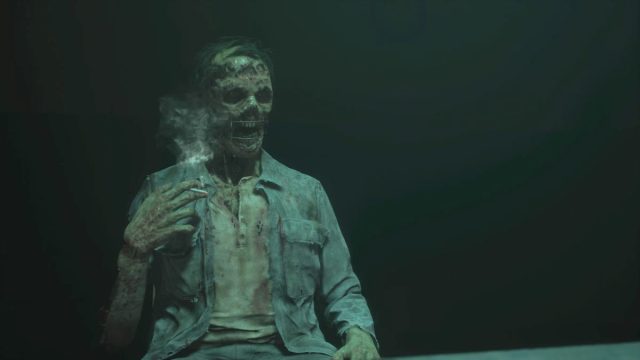 Image via Supermassive Games
Review of:

The final installment of The Dark Pictures Anthology‘s first season, The Devil in Me arrives today and we’re pleased to report it’s the best title in the franchise to date. Since 2015’s Until Dawn Supermassive Games’ titles have boasted an impressive array of Hollywood talent who’ve been scanned, motion-captured, and inserted into various terrifying worlds.

Over the years we’ve seen X-Men and The Boys‘ Shawn Ashmore, Midsommar and Guardians of the Galaxy Vol. 3‘s Will Poulter, and High School Musical‘s Ashley Tisdale make the leap into these virtual nightmares. Now we have a fresh crop of victims-to-be turning up at a recreation of H.H. Holmes’ murder castle in The Devil in Me. Their lives are in your hands, so let’s see who’s who in the cast.

The Curator, played by Pip Torrens

Pip Torren’s Curator is the connective tissue that binds these games together, acting as a kind of Tales from the Crypt-style overseer. He’s sinister yet helpful, dryly commenting on how well you’re doing and occasionally offering tips for survival. Torrens will be familiar to viewers of The Crown for playing the Queen’s Private Secretary Tommy Lascelles in the first two seasons. He’s also appeared as Lord Massen in The Nevers and contributed to the game of the year Elden Ring as the voices of Radahn and Varre.

Jessie Buckley is the most high-profile member of the cast, playing spiky yet determined true crime presenter Kate. She’s been a mainstay of some of the most critically acclaimed television of the last few years, appearing in Chernobyl as Lyudmilla Ignatenko and Oraetta Mayflower in season four of Fargo. Buckley also scored a Best Supporting Acress Oscar nomination for her role in the 2021 movie The Lost Daughter, in which she played the younger version of Leda.

Lighting tech Jamie is one of the larger roles in The Devil in Me, though Obianyo might be somewhat less familiar to viewers. The up-and-coming actor played one of the Fremen in Paul Villeneuve’s Dune, Uriel in Neil Gaiman’s Good Omens, and appeared as Mercy Woodcock in 2014’s Outlander. Obianyo has also had a sterling career on stage in London, appearing in productions of A Christmas Carol at the Old Vic and Anthony and Cleopatra at the National Theatre.

Struggling cockney director Charlie is one of the more fun characters in The Devil in Me, trying to balance a raging nicotine addiction with surviving the night. Kaye might be best known to British viewers for anarchic celebrity interviewer Dennis Pennis in the 1990s, but has since appeared in Pennyworth, Catherine the Great, Good Omens, The Windsors, Doctor Who, Inside No. 9 and as Thoros of Myr in Game of Thrones‘ third, sixth, and seventh seasons.

Mark Nestor is the crew’s cameraman who’s battling a debilitating fear of heights in The Devil in Me. Balogun also appeared as Fremen in Paul Villeneuve’s Dune, also showing up in The Electrical Life of Louis Wain, Urban Myths, and The Bastard Son & The Devil Himself. He’s also dabbled in previous video game work, showing up in Ruined King: A League of Legends Story and VR title The Gallery.

Erin is in charge of sound and features in what’s arguably the game’s scariest sequence as she wanders the halls with a directional microphone tracking down a mysterious crying sound. For British viewers, Patel will be instantly familiar for playing Amber Kalirai on the soap Coronation Street from 2005-2012, appearing in an impressive 244 episodes of the show. More recently she’s appeared in Call the Midwife, Doctors, and Holby City. Along the way she’s also built up an impressive stage resume, appearing in Kenneth Branagh’s theater production of Romeo and Juliet.

Jeff appears in the game’s 1890s set prologue as half of a honeymooning couple having an unfortunate encounter with H.H. Holmes. He played Hugo in nine episodes of Killing Eve, Captain Harville in Persuasion earlier this year, Arch Songster in Brave New World, and Luke Nightingale in Ten Percent.

Marie is the other half of the doomed couple in the prologue, with Archer appearing in The Pursuit of Love and The Amazing Mr. Blunden. Avid gamers may find her voice more recognizable, as she voices Eunie in Nintendo Switch RPG Xenoblade Chronicles 3.

The Devil in Me includes a teaser trailer for the first game in The Dark Pictures Anthology‘s second season, Directive 8020. This appears to be a sci-fi horror inspired by Alien and Event Horizon about an attempt to find a new home for mankind on a distant planet. Unfortunately, some kind of cosmic terror is lurking in the depths of space. All the characters seen in this are wearing opaque space helmets so we don’t know who’ll be the big draw, but based on Supermassive Games’ work in season one we’re sure to see many more familiar faces from across TV and film.

Further details of the second season are murky, though Supermassive Games has filed Dark Pictures trademarks for the titles “The Craven Man,” “Intercession,” “Winterfold,” “Switchback,” and “O Death.” As the first season comprised four titles we may even be looking at some from the eventual third season, but with just one of these games releasing a year we’ve got a long wait to find out details about them.

In the meantime The Dark Pictures Anthology: The Devil in Me is out today on PC, PlayStation 4 and 5, and Xbox consoles.