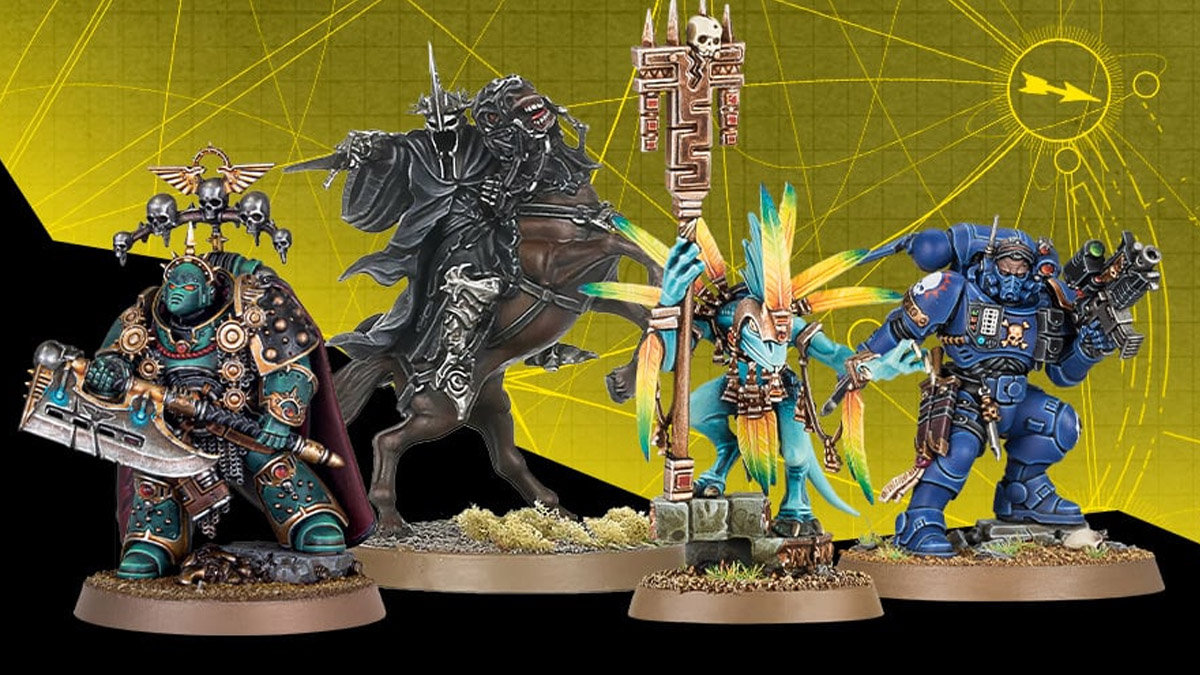 Warhammer 40K launched in the late 1980s as a dark sci-fi spinoff of miniature tabletop war game Warhammer. Its grimdark aesthetic led it to surpass its predecessor and launch a gigantic multimedia franchise, including books and video games. The universe and its pop culture impact are set to get larger with the announcement that Amazon had signed a deal with 40K owner Games Workshop to bring the saga to live action, with Henry Cavill producing and expected to star.

The one-time Superman and Geralt of Rivia has long been known to have a soft spot for fantasy, particularly Warhammer 40K. During the 2020 lockdown, he revealed his hobby to millions of Instagram followers. Other celebrity fans included Robin Williams, a famously early ambassador who dragged Billy Crystal to the table, as well as Ansel Elgort and Ed Sheeran.

Miniatures are where it all begins, on a 6’x4′ table with players setting their armies against each other with dice, rulers, and a quick grasp of mathematics.

What are Games Workshop miniatures?

Warhammer 40K’s predecessor was the first tabletop battle game to use only proprietary models. Likewise, 40K’s miniatures are exclusively produced by Games Workshop, the manufacturer that first launched the franchise.

Initially founded as a wooden board game manufacturer, the company soon started importing the U.S. role-playing game Dungeons and Dragons, then publishing its own wargames. Games Workshop has always been clear about its interest in progressive gaming, including video games, where its brands have found great success.

However, in 1979 the company founded Citadel Miniatures to produce models for its role-playing and tabletop games. That sub-brand has become synonymous with Games Workshop, although it has subsequently been folded into the overarching brand.

The miniatures are necessary for gaming—tabletop battles wouldn’t be the same without them—but they have created a side hobby of their own. Players of Warhammer 40K must buy, build, and paint miniatures themselves. The two aspects work together, although some collectors particularly enjoy the peaceful distraction of painting and crafting exquisitely small works of art.

Games Workshop magazine White Dwarf has long provided expanded mythology for the universe, supplemental game rules, and examples and tips for legions of fans to paint their miniatures.

Over the decades, thousands of models have been produced. In Warhammer 40K’s dystopian future, where the stagnant Imperium of Man fights a vast and unwinnable war against aliens and the supernatural, the look of your army is almost as crucial as your gameplay.

Most Warhammer 40K models are polystyrene and can be adorned and painted using Games Workshop’s brand glue, tools like brushes and hobby clippers, and acrylic Citadel Paints. The process for painting miniatures is complex, launching almost as many painting guides and several paint types in Games Workshops’ acrylic range. Every model has a set of rules governing its effectiveness on the tabletop field of battle, including durability, movement, and weapon range. Although there isn’t a recognized scale, they are approximately 1:60, with standard miniatures between 25 and 28mm. Vehicles naturally take up more table—models like the Baneblade super-heavy tank reach 24 cm in length.

Where can you buy Warhammer 40K miniatures?

Games Workshop exclusively handles the manufacture and distribution of all Warhammer 40K miniatures. The most direct way to see and purchase them is through Games Workshop stores. Worldwide, there are over 500 shops you can drop into—165 in North America, 151 on continental Europe, 135 in the U.K., 49 in Australia, and 18 in Asia.

You can pick up miniatures online at retailers like Amazon and Forgeworld, but the most comprehensive range is available through the official Games Workshop’s website. There and at their focused brand sites, Warhammer Stores and Warhammer40000.com, you’ll learn more about starting and expanding your hobby. In 2021, the company also launched Warhammer+, which gives subscribers access to original streaming content and exclusive miniatures.

The Warhammer 40K line stays fresh with constant updates to its rules and new additions to its vast line-up of models. That means models and whole sub-games are continually discontinued as new ones enter the universe. If you’re new to the world of Warhammer 40K, get ready for a fast-paced and evolving game mechanic to go with the relaxation of ensuring your miniatures are the best painted on the table.