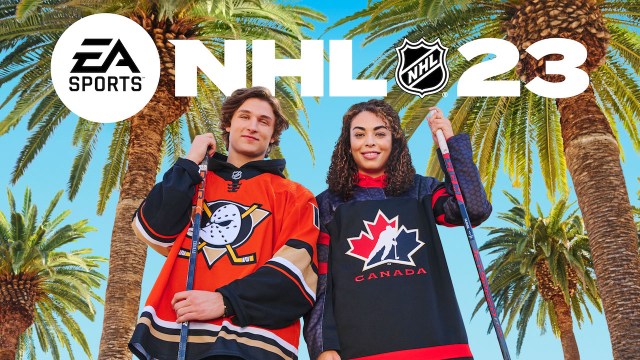 Earlier in August, EA Vancouver invited a handful of journalists from around the world to get an exclusive sneak peek at NHL 23. We were lucky enough to see some of the new features coming to the ice this year, and were introduced to this year’s cover stars — yes, stars — as both the Anaheim Ducks centerman Trevor Zegras and Canadian Women’s National Team star Sarah Nurse will grace the cover. The addition of Nurse as a cover star was a precursor to the biggest news drop of the session: women players are coming to NHL 23!

The game is including women for the first time ever, and with the NHL pushing that hockey is for everyone, the addition is welcome. Women players from the IIHF Women’s National Team will be available to play in Hockey Ultimate Team (HUT) games, and your HUT teams can be as co-ed as you want. The female players will have both base and master items incorporated into the HUT and World of CHEL game modes, allowing players to build the best teams and take them out into the world in matchups with others. Since fighting is not allowed in the IIHF, co-ed teams will have the fighting option removed in HUT.

Also new to NHL 23 are “last chance” puck animations, giving your team a chance to do something simply outlandish if you’re down as the clock runs out. The videos we were shown featured players making desperation one-timers and team-wide net crashing to try and level a score before regulation expires. If you’re successful, there will be new animations that highlight the fact that you just did something amazing.

The new animations are part of a staggering 500-piece overhaul in gameplay and presentation, with the latter now including game-specific crowd reactions and hat trick celebrations. Finally, dropping that third goal in the net will result in a shower of used hats hitting the ice, one of hockey’s most beloved traditions. Crowd chants and more will help suck you into the hockey experience, which lends itself well to the franchise’s focus on realism.

The new “living arenas” feature makes the crowd’s energy part of your game. If you are absolutely blowing out your opponent, the AI crowd will recognize that and react accordingly with camera-shaking applause and more. NHL 23 will react to how well (or poorly) you’re playing and will create a true-to-life atmosphere in the rink to help power you through for all 60 minutes. Along with the attention to detail given to the crowds and arenas, real-life NHL drama will factor in, as the Arizona Coyotes were famously (or infamously) evicted from their old arena and will be spending the next few seasons sharing the Mullett Arena with the Arizona State Sun Devils. While EA Vancouver wasn’t able to get the license for the NCAA arena, the in-game Coyotes will be playing in a smaller, nondescript building.

New ice physics have also made the cut, including ice wear and tear, board scuffs, and more. If you play a physical game, your arena will show it, adding yet another layer of realism. NHL 23 marks the second year that the franchise has been improved upon with the Frostbite engine, and already the developers are pushing the boundaries of what can be done. The new player models are realistically stunning, and the game has never looked this good from top to bottom.

The last of the major bombshells dropped by EA Vancouver for NHL 23 was the addition of cross-play in HUT and World of CHEL matchmaking. Now, those on Xbox Series X/S can go up against PlayStation 5 players, which the developers hope will cut down on matchmaking issues that have plagued the series in recent years. Unfortunately, the cross-play is not cross-generation, meaning PS5 owners can play against Xbox Series X/S players, but not against those on PS4 or Xbox One, and vice versa. The cross-play feature is expected to hit the ice in November.

All in all, NHL 23 looks to be taking a giant leap this year, which isn’t always the case with annual sports games. While there’s not much that can be done to tweak hockey itself — the greatest game on Earth — EA Vancouver has set their sights on making the experience the best, most realistic ever, and with the inclusion of women players from around the world, hockey really has become a game for everyone.

NHL 23 will be available on October 14 for PlayStation and Xbox platforms.