Neon White is going to make more than a few people realize they’re speedrunners at heart. Its brand of competition with the self is enthralling, and it's lifted to greater heights by its presentation, music, and mechanics. 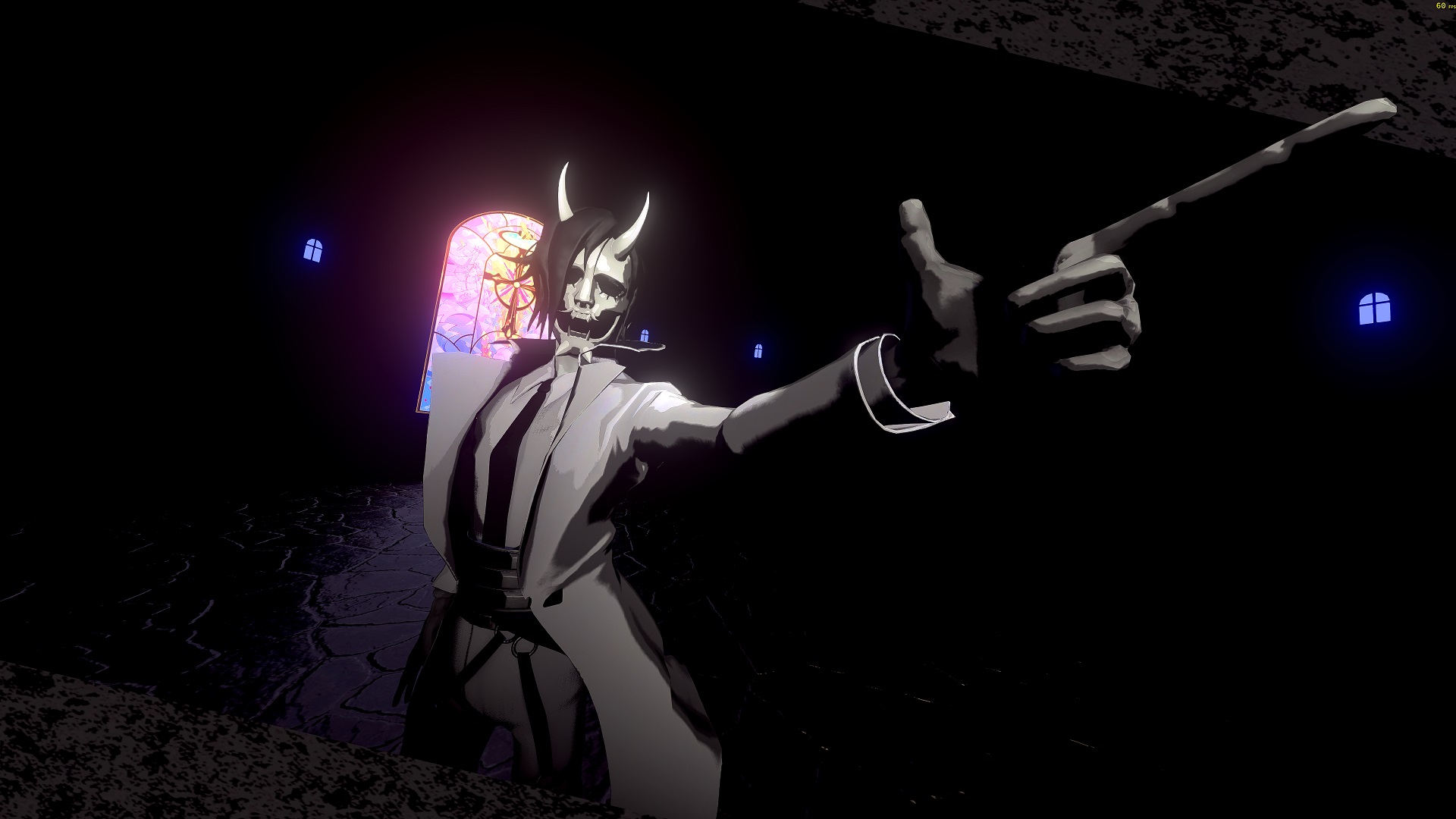 Remember that trailer for an indie game you probably saw sometime last year, with the cool anime characters and the shooting and the nice bright environments and hardcore breaks soundtrack? Then you might’ve seen the playing cards on screen and glazed over like I did. Well that game has been out for a while now, it’s incredible, and it’s called Neon White.

Let me start by selling you on what kind of game Neon White actually is. You play as a Neon, a persecuted soul brought from Hell to compete in a house-cleaning contest for Heaven by slaying wayward demons. You rush through each bite-sized level to shoot for the fastest times, using cards representing guns that have unique fire patterns but, more importantly, have “discard” skills. Throwing away a card means losing all your ammo, but also grants a movement ability like a dash, double jump, or ground slam. Using cards wisely together with movement is essential to getting a good enough time on each level to rank up and move on to the next chapter.

I was laying in bed dozing off trying to imagine how I would’ve directed a Neon White trailer because, oh man, whoever handled the marketing material I saw online did not define the game’s “loop.” Maybe it would start with a little animated intro, then a montage of a run-through of one of the game’s many levels. Then, a rewind, running through the level again, only this time using the novel discard mechanic and doing it much faster. Then again, only using a shortcut to shave off a few more seconds. Maybe a persistent timer could be on screen, showing off the time saves between each of the three attempts. I don’t know, man, I’m not Derek Lieu.

It’s hard to look at Neon White’s gameplay and “get it.” It’s a puzzle/speedrun/shooter/platformer. You slaughter your way through a given level in a matter of seconds, then do it again and again to perfect your score. It’s a thrill-chasing joyride of micro-decisions that can make or break your spot on the leaderboard. Trying to beat my friends’ times provided more challenge than the medal system ever could.

In between these romps through strings of levels are visual novel-style story segments that see you and fellow Neons killing time in Heaven between jobs. Treated as second-class citizens vying for the spot to stay until next year’s events, Neon White and compatriots have an endearing sort of buddy/rival thing going on. This is all to say nothing of Neon White’s amnesia and his implied connection to the other Neons during his life on Earth. These segments are campy and filled with tropes but well-voiced enough to never be too grating. I did often find myself wanting them to end so I could get back into the action on more than one occasion, though.

There’s also this pseudo-dating-sim type system where you give gifts you find in levels to other Neons in exchange for dialogue (boring) and bonus levels (cool). The completionist in me loved having several of these to turn in at once, but waiting for slow animations to play out each time turns the process into a bit of a slog. Neon White won’t be winning any awards for character writing or story, but the main gameplay is so good it’s easy to call this experiment a slight misfire and move on.

The social sections might be a bit lacking but the core missions are varied and evolve neatly as you progress. New cards and mechanics are introduced to throw more curveballs at the player, forcing innovation and quick thinking. It’s a game that’s a lot less about mechanical skill than planning, for the most part. I didn’t feel my FPS chops were being tested as much as my ability to optimize, save for a few tricky sections that required some snap-shots mid-jump.

As you do better and better in each level, “hints” which assist in finding the fastest intended path present themselves. These icons point you right toward what is usually a massive time-saver, and the fact that they present themselves only after you’ve proven yourself means they don’t feel like gimmes. On the contrary — finding the optimal route is only half the fun. Optimizing card usage and things like momentum and movement were far and away my favorite bits of the game.

As someone who watches AGDQ annually and is obsessed with YouTuber Summoning Salt’s speedrun history videos, Neon White made me understand better than anything the thrill of the chase. Using cards at the right moment and killing enemies from cheeky angles across the map because you skipped half of it is just… Yeah. It’s great. It reminds me of trying to clip out of bounds in games for fun as a kid — Neon White is asking you to break it. To bend the level to your whim and see what you can get away with. Throwing yourself at the finish line with a flick of the wrist and a finger jammed on the W key while praying you beat your high score is a thrill like few others.

A quick shout-out to the music seems appropriate, since I’ve been listening to Machine Girl for a few years now, and was very happy to see them doing the score. The soundtrack is a chilled-out version of their typical hardcore breaks style, with some sparse vocal sampling that really brings the hype when you’re in the flow state. The music fits and elevates the gameplay not usually seen in flow games like this, and reminds me of how enhanced a game like Jet Set Radio is by its soundtrack. It’s excellent stuff. It’s not hard to recommend Neon White, even if on the surface it looks like a very niche title. I’m semi-confident this will awaken the inner speedrunner in many a new gamer, and more than satisfy those who even casually engage with the self-competition it imposes. The visual novel sections may be nothing more than a pleasant enough detour from the main action, but the style and confidence Neon White displays are entrancing.

This review is based on the PC version of the game. A code was provided for review by Annapurna Interactive.

Neon White is going to make more than a few people realize they’re speedrunners at heart. Its brand of competition with the self is enthralling, and it's lifted to greater heights by its presentation, music, and mechanics.