Saints Row is ready and willing to leap back into the mainstream, though it's unfortunately weighed down by a few odd design decisions and a handful of technical issues. 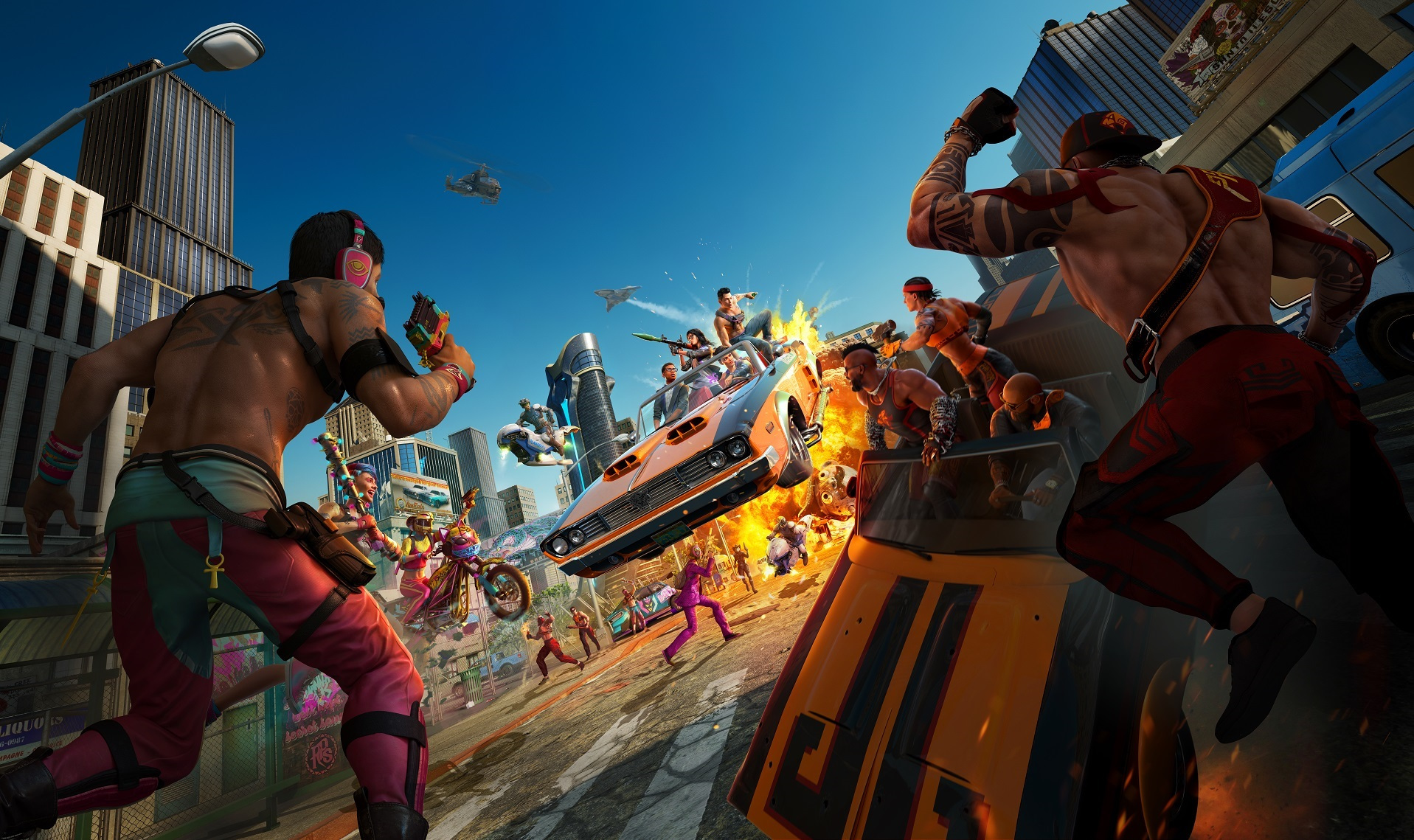 After the misstep that was 2017’s Agents of Mayhem (‘misstep’ might be putting it lightly), developer Deep Silver Volition is making a return to the franchise that helped put them on the map. 2022’s Saints Row — as its stripped-back name suggests — serves as a reboot for the series, eschewing the irreverent tone and over-the-top antics that defined Saints Row 3 and IV in favor of telling a new story that’s decidedly more grounded. Unsurprisingly, this decision was met with divided opinions from the fanbase, but after spending a couple dozen hours with Volition’s latest offering, I’m confident that fans and newcomers alike will find plenty to enjoy — assuming they’re able to stomach a few odd design decisions and a litany of technical issues.

As has become standard for the franchise, you take control of the leader of the Saints, a street gang with a penchant for violence and a flashy public image. Seeing as how this is a reboot and all, you don’t actually start off as a criminal mastermind — instead, your player character (referred to in-game as “The Boss”) starts off their journey as a fresh hire for Marshall Industries, the local private military corporation. It doesn’t take long before you’re fired from your new gig, and after a few run-ins with the other gangs in town, you decide to form your own criminal empire with three of your best friends: Kevin, the lovable and buff DJ; Neenah, the lead-footed art buff; and Eli, the group’s up-and-coming entrepreneur.

Surprisingly, the interpersonal relationships between the four founding members are one of the highlights of Saints Row. While Kevin, Neenah, and Eli aren’t nearly as flamboyant or in-your-face as series mainstays like Shaundi or Johnny Gat, they’re infinitely more lovable. Some of the game’s best moments come in the form of side missions where you spend some quality time with one of your friends, which run the gamut from LARPing with Eli to trying to track down Neenah’s beloved car.

Regardless of which gang you’re actively rivaling with or what business venture you’re trying to expand, players will be spending a lot of time doing two things — driving and/or shooting. The former is fairly straightforward; Saints Row is by no means advertising itself as a driving sim, and as a result, cars feel appropriately ‘floaty’ in motion, thanks in part to overexaggerated drifting.

Combat, on the other hand, can be a bit of a mixed bag. I can only assume this was done on purpose, but Saints Row‘s gunplay almost works against you if you try to treat things like a military shooter with precise aiming and timing. Instead, there’s a heavy focus on aim assist, and while it can be disabled, you get the sense that the developers expect you to take advantage of it. After struggling during the open hours, I eventually caved in and learned to embrace the aim assist, which kicks in when you dial in on an enemy.

As I mentioned in my hands-on preview, the wild and imaginative weapons from games past aren’t the focus of 2022’s Saints Row, so don’t expect to pass the hours away with a dildo bat in one hand and a dubstep gun in the other. This time around, firearms are decidedly more traditional — think SMGs, pistols, rifles, RPGs, and the like. Thankfully, Volition has kept things interesting with perks — which are unlocked as you complete in-game challenges — and special skills, which are doled out as you level up your character. Perks and skills can be swapped out on the fly (allowing for plenty of experimentation), and are also the only way to try out some more high-tech gear, such as an anti-gravity grenade or a sniper rifle that fires explosive shots. Flashy close-quarters takedowns replenish your health (one of the few ways to save you from an untimely death), though some of their stylish animations can take several seconds to play out, which gets pretty old pretty quickly — a far cry from the fast and brutal glory kills from Doom Eternal.

Speaking of infuriating design decisions, there are a few that rear their ugly heads throughout the course of the game’s campaign, so be ready. While your player character uses their smartphone to choose missions, select perks/skills, and call in reinforcements, you’re forced to head to a gun store to refill ammo and customize weapons. Similarly, you’ll need to head to a garage if you want to trick out or drive a specific car. This is rather unfortunate considering you’ll be doing a lot of the aforementioned shooting and driving. For those wondering, yes, there is fast travel, but you’ll need to take pictures of specific landmarks before you can fast travel to them, and since there isn’t an abundance of them to begin with, you’ll never be able to significantly cut down the time you’ll have to spend behind the wheel.

Outside of shooting, looting, and driving, there’s the matter of the Saints’ many business ventures, which you’ll gradually unlock over the course of the game. Admittedly, there’s some degree of freedom here, as you can prioritize building some businesses first, allowing you to access fan favorites, such as Insurance Fraud, earlier on in the story.

The problem is, at various points throughout the campaign, you’re forced to fully ‘complete’ a set number of ventures before you can progress the main story, and this can become very tedious. Some of these ventures are phenomenal — namely, the Dustlanders sidequest, which sees you teaming up with Eli in order to emerge victorious in a city-wide LARP event that draws plenty of inspiration from Mad Max. But then there are more tedious ventures, like Jim Rob’s garage, which tasks you with carjacking a dozen or so vehicles and driving them back to his garage. This is fun the first couple of times, but it gets old rather quickly, and your patience will wear thin when you’re forced to grind out ventures just so you can see the next part of the main story.

Patient players will be able to stomach these sections more easily than I did, but if you’re reading this review, here’s a piece of advice — be sure to regularly switch back and forth between story missions and side content, lest you want to grind out building up the Saints’ many ventures for a couple of hours on end. Don’t get me wrong — Saints Row features plenty of daring heists, wild shootouts, and death-defying car chases, but it’s also a by-the-numbers open-world game in many respects, with a sea of collectibles and waypoints littered across your map.

And then there’s the matter of Saints Row‘s many bugs, glitches, and technical issues. Some of them are more egregious than others, but throughout the course of my time with the game, I experienced several soft locks on loading screens, instances of audio cutting out, animations glitching, enemies standing around instead of engaging in combat, tutorials persisting on screen, broken scripting during missions, my controller becoming unresponsive, and one instance where my character’s ammo, weapons, and customization were completely wiped/reset. It’s worth noting that there is a day one patch on the way, but it’s unlikely that every single issue will be sorted out by launch, and there are several other bugs and issues that I haven’t mentioned, mostly for the sake of brevity. Sure, none of the issues I encountered completely broke my playthrough, but they are far from infrequent, and they most certainly detracted from my enjoyment.

If it sounds like I’m torn on recommending Saints Row, it’s because I am. On the one hand, it’s an action-packed spectacle that features some of the franchise’s most memorable missions, storylines, and characters to date. On the other, it’s very much a by-the-numbers open-world game that hasn’t necessarily benefited from improvements and innovations made by some of its contemporaries over the past five years (I’m looking at you Breath of the Wild and Elden Ring). And of course, even if you’re willing to put those comparisons aside, there’s still a slew of technical issues and bugs to contend with. It’s been nearly 10 years since the franchise has enjoyed some time in the sun, and while 2022’s Saints Row is ready and willing to steal the show, it’s safe to say that the limelight shines a little less brightly this time around.

This review is based on the PlayStation 5 version of the game. A copy was provided for review by Deep Silver.

Saints Row is ready and willing to leap back into the mainstream, though it's unfortunately weighed down by a few odd design decisions and a handful of technical issues.