Teenage Mutant Ninja Turtles: The Cowabunga Collection is a true labor of love from Digital Eclipse. Although the quality of the games included may be scattershot, ultimately, there's still enough good content to appeal to fans and non-fans alike. 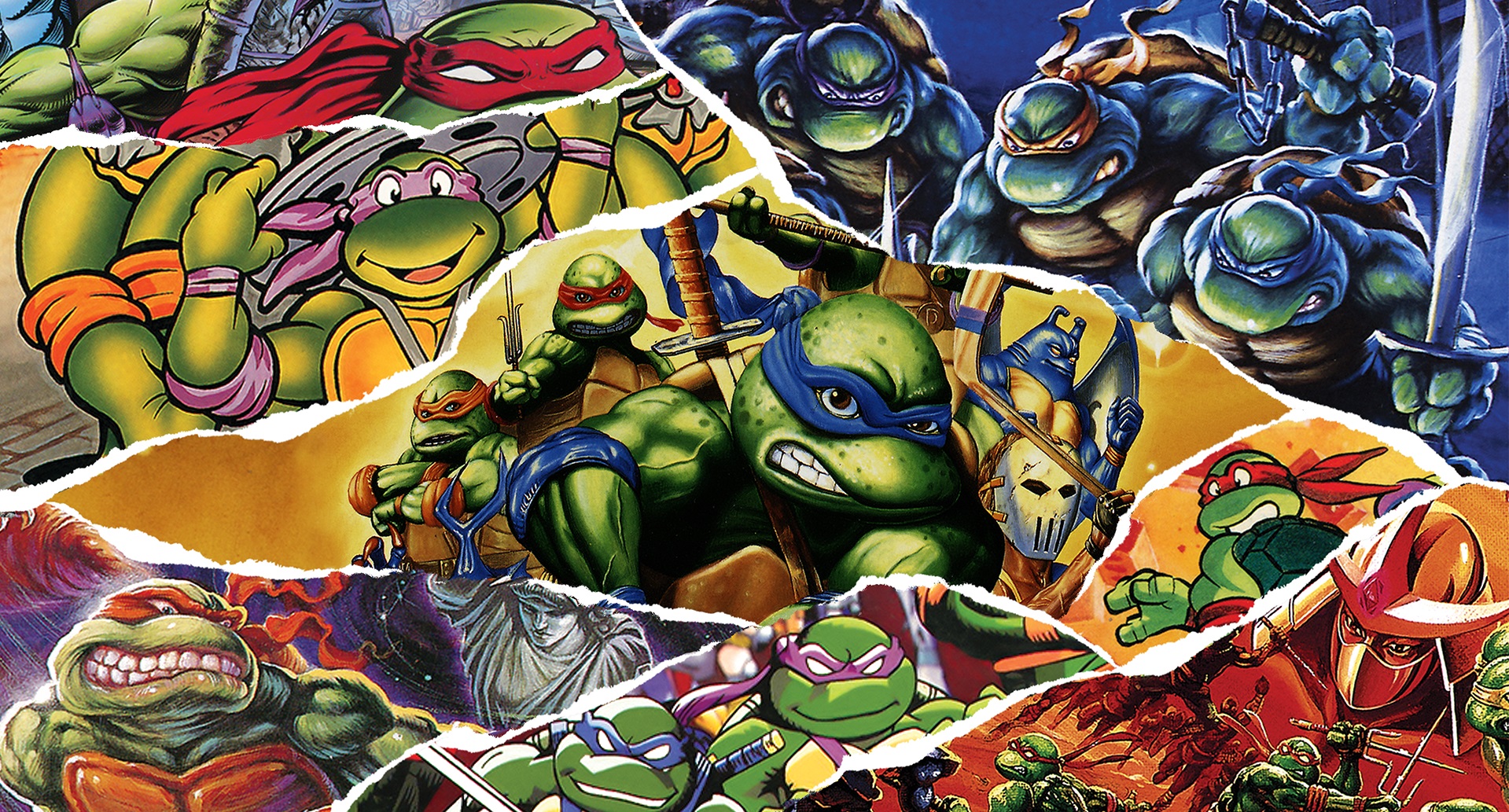 As someone born in 1989, I feel like I just missed the cut-off for Teenage Mutant Ninja Turtles fandom. I was too young for the original trilogy of films, and the first cartoon was mostly finished by the time I started getting into that kind of show. In spite of that, I still had some appreciation for the franchise. My older brothers had a treasure trove of action figures, and perhaps more importantly, the iconic Turtles in Time for the Super Nintendo. I may not have known much about the show, but I was certainly a fan of that beat ’em up. It’s a classic for millions of gamers, which is why studios keep trying to bring it to current consoles. Rather than try to erroneously remake it again, though, Konami decided to just port it — along with 12 other titles based on the series — to modern consoles with the release of Teenage Mutant Ninja Turtles: The Cowabunga Collection.

Developed by the retro game aces at Digital Eclipse, The Cowabunga Collection brings together just about every pre-2003 reboot Teenage Mutant Ninja Turtles game. This covers titles originally seen in arcades as well as home releases for the original and Super Nintendo, Sega Genesis, and Game Boy. Some of them are ports, while others were created specifically for the platform. Before even getting into the quality of these games, I think it’s great that they are all available for modern consoles now. It’s rare to see someone put in the work to resurrect original NES and Game Boy games, so kudos to Digital Eclipse for doing so. As is usual with these re-release sets, a copious amount of bonus content has been included as well. For the Turtles fanatic out there, this is like a dream come true.

Of the baker’s dozen games included, it’s the two arcade releases that continue to shine brightest. Teenage Mutant Ninja Turtles and Teenage Mutant Ninja Turtles: Turtles in Time are still two of the best beat ’em ups released by Konami during the golden age of the genre. The sprite work of both is immaculate, and they play like a dream in these new ports. I think what really makes both of these titles great, though, is that they are challenging, but don’t tip over into being unfair. Yes, the fact that you don’t need to pump coins into them helps, but both aren’t as continually frustrating as some other titles in the genre can be.

It could be nostalgia speaking, but the home ports of both of those arcade hits hold up rather well. These are the versions I am most familiar with, and I was able to instantly jump right into them. Although the less impressive of the two, the NES release of Teenage Mutant Ninja Turtles is a surprisingly capable version. Bringing arcade releases to home consoles was a difficult task for years, so it’s not a shock that the port can’t entirely match up. However, Konami still managed to craft an enjoyable beat ’em up that even includes some additional content. The SNES version of Turtles in Time also struggles to match its arcade counterpart but makes up for it with various additions. The use of Mode 7 still looks cool, and the additional level in the Technodrome is a highlight. Even if you are beholden to the original releases, both of these ports are still worth playing through.

Although Sega Genesis owners didn’t get a version of Turtles in Time, they got something almost as good in the form of The Hyperstone Heist. Re-released for the first time in the Cowabunga Collection, this was my first time playing through it, and it’s easy to see the influence Turtles in Time had on this game. It plays very similarly, and the level design borrows elements from that more popular release. However, Hyperstone differentiates itself by feeling more like a console game with its longer-level design. As with the well-regarded SNES port, this title can’t match up with the arcade game it draws from, but it’s still enjoyable, and I can see why it would have been as well regarded as it was back when it first hit store shelves.

With four titles included in the compilation, the NES holds the distinction of the most represented platform. Besides the aforementioned Teenage Mutant Ninja Turtles II: The Arcade Game, the collection also includes the original Teenage Mutant Ninja Turtles, The Manhattan Project, and Tournament Fighters. The first TMNT is probably the most well-known, although not for the best of reasons. It’s notoriously difficult, and in my opinion, a bit of a nightmare to play. Controls are clumsy, and enemies constantly hit you with cheap shots. The cross between top-down exploration and side-scrolling action is a cool idea, but overall it’s just not enjoyable to play. Faring much better is The Manhattan Project, which almost feels like a direct sequel to The Arcade Game. The core gameplay is mostly the same, with the ability to throw enemies emerging as the flagship new mechanic. Like its predecessor, it’s not the most complex game, but I still had fun with it.

Honestly speaking, The Tournament Fighters trio of games rank among the bottom tier of titles included in The Cowabunga Collection. Looking to capitalize on the fighting boon of the early ’90s, Konami released this lackluster fighter for the NES, SNES, and Sega Genesis. If you had to pick one to play, I guess the SNES version would be the way to go. The visuals are better, and the gameplay doesn’t feel as cumbersome as the versions on the other two platforms. However, I still don’t think it’s a particularly good fighter. The roster is a let-down, and the action is a major step-down from something like Street Fighter. The Genesis version may be worse overall, but at least it includes Casey Jones and April as playable characters. The NES version is just a prime example of why fighting games didn’t work on the platform. I know this game has its audience, and the property should lend itself to the genre, but there were much better fighters available at the time, and there are certainly better options out there now.

Rounding out the set is a trio of Game Boy titles. The first two, Fall of the Foot Clan and Back from the Sewers, aren’t much to write home about. Simple beat ’em ups that were probably great for the time, but are now too simplistic. Back from the Sewers at least mixes things up by including gameplay elements such as climbing and bonus mini-games. The real curiosity is the third game released for the handheld, Radical Rescue. Eschewing the simple formula from the first two releases, this title borrows heavily from Metroid. Playing as Michelangelo, you must navigate your way through Shredder’s fortress in order to rescue the other three turtles. The non-linear level design gives the title a good amount of depth, and it offers a challenge not seen in the other two titles. There are still annoyances to be found, such as respawning enemies and occasional lag, but this entry was a pleasant surprise.

As with previous compilations released by Digital Eclipse, The Cowabunga Collection comes complete with the usual spate of quality of life improvements. Button mapping, save states, and the ability to rewind gameplay are very welcome additions indeed. Online play is included, but only for four of the included games: the arcade versions of Teenage Mutant Ninja Turtles and Turtles in Time, Hyperstone Heist, and the SNES version of The Tournament Fighters. Besides the quality of life improvements, each game has also been given a few select optional enhancements. These options include God Mode for the arcade titles and the removal of flickering from the NES games, to name a few. It’s a nice addition that makes playing some of these games a much more palatable experience.

Finally, there is a ton of bonus content included for die-hard fans. In the Turtle’s Lair section of the collection, you can find items such as comic book covers, screenshots from the various animated shows, strategy guides, and design documents. Some of the content doesn’t really make sense to include, specifically, images from the more recent shows, but I suppose it’s good to have them for the sake of completeness. I always get a kick out of looking at the old magazine ads included in these releases, and this one is no exception. A lot of this side content will only appeal to a select audience, but I applaud Digital Eclipse for compiling it all for inclusion here.

From the angle of game preservation, I love what Digital Eclipse and Konami have done with Teenage Mutant Ninja Turtles: The Cowabunga Collection. It brings together a handful of games that really never got ported from their original consoles and delivers them to a brand new audience — I wish more companies put in the effort for their back catalog like these two studios did. However, from a game quality perspective, the results are more mixed. There are some stone-cold classics here like Turtles in Time and the 1989 arcade game, but also some stinkers like The Tournament Fighters and the original NES game. I do think there are ultimately more titles of quality than not, but when it comes to these compilations, you would ideally hope for every game to be worth playing. Still, this set will please the fan base, and I hope it leads to more recent games based on the property getting some attention down the line.

This review was based on the PlayStation 5 version of the game. A copy was provided to us by Konami.

Teenage Mutant Ninja Turtles: The Cowabunga Collection is a true labor of love from Digital Eclipse. Although the quality of the games included may be scattershot, ultimately, there's still enough good content to appeal to fans and non-fans alike.