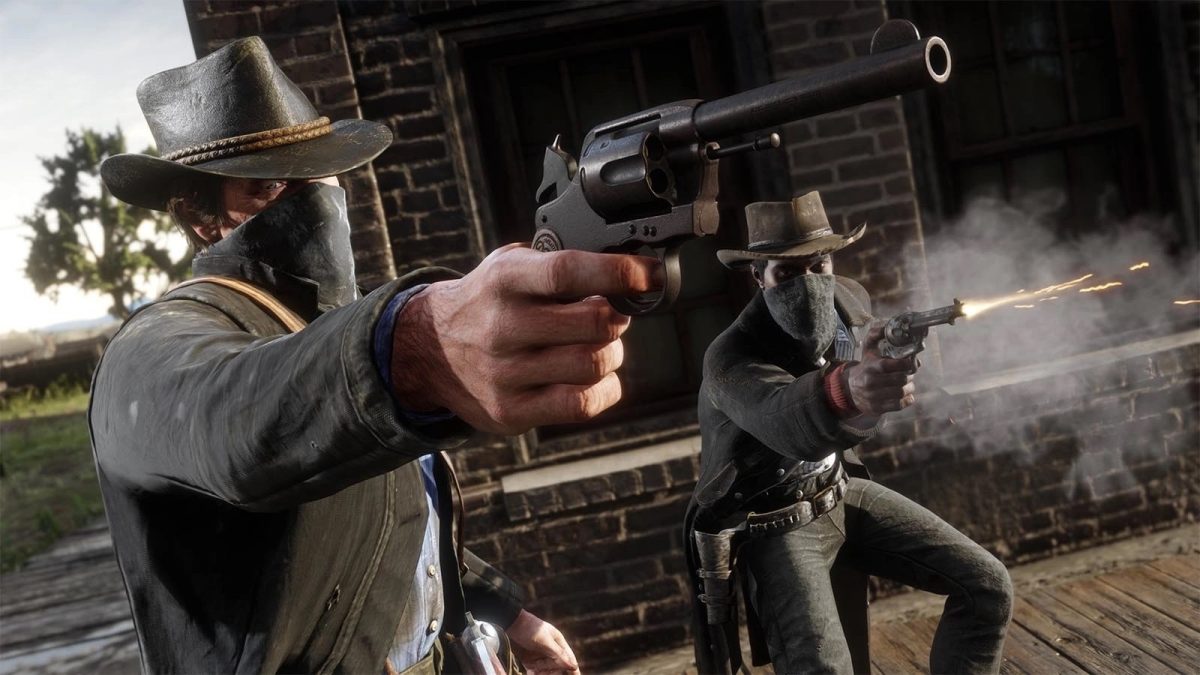 There’s absolutely no denying that open world games are some of the most adventurous, immersive, and three-dimensional experiences to ever grace the digital world. The definition of open world is an environment that players can roam freely, often completing quests, finding collectibles, or partaking in special events such as mini games. As opposed to a world with a more linear structure, this type of gameplay gives the player more options to progress the story and extends the hours of playtime well beyond a typical 6-8 hour run.

Some of the best open world games are also some of the most influential and successful titles in gaming history, which speaks volumes about the popularity of the game mechanic. None of the titles on this list should come as a surprise; they’re award-winning, they’re groundbreaking, and their legacies will likely live on for generations to come.

While RDR was a massive hit in 2010, an up-and-coming era for gaming where unforgiving graphics, wonky motion capture, and glitches galore run rampant, it wasn’t until 2018 that the franchise truly established itself as untouchable with the utterly flawless and visually breathtaking RDR2. It became one of the most expensive video games ever made, but despite the hefty budget, it has been cited as a prime example of video games as an art form, mainly for its cinematic properties.

Kick-starting the Horizon series, Horizon Zero Dawn released in 2017. It follows Aloy, a young hunter seeking to uncover the secrets of her past, all while navigating a post-apocalyptic world overrun with hostile machines. Guerrilla Games began production on Horizon Zero Dawn shortly after completing their first-person shooter, Killzone 3. In February 2022, a sequel titled Horizon Forbidden West was released on PS4 and PS5, but generally, Zero Dawn is more highly favored. It also made a considerable mark on the gaming community for being one of the only prominent open world games to feature a female protagonist.

Zero Dawn had the most successful Playstation 4 launch since Uncharted 4: A Thief’s End, even surpassing the likes of No Man’s Sky. In the open world environment, Aloy can discover new locations and complete side quests alongside the game’s main storyline. Critics praised Zero Dawn for its story, visuals, combat and the stand-out performance of voice actress Ashly Burch, who went on to provide the voice of Mel in The Last of Us: Part II and Danika Hart in Spider-Man: Miles Morales.

Perhaps one of the most famous games in existence by reputation and iconography alone, Minecraft released in 2011 and became immensely popular. In fact, Minecraft is the best-selling video game of all time, boasting nearly 140 million players (as recorded in 2021). In Minecraft, players — as standard — control Steve, a customizable everyman who roams a 3D-generated sandbox world. Steve can interact with materials, craft items and build anything imaginable. Minecraft has two game modes; survival mode, where Steve fights hostile monsters and builds resources to eventually become powerful enough to take on the Ender Dragon; or creative mode, where players have unlimited resources and the ability to fly.

In the block-filled environment, Steve can encounter animals, creatures and various terrains, all of which are generated automatically throughout the game. If he walks far enough, Steve can reach the edge of the world, whereby the environment ceases to generate further. The possibilities are endless in Minecraft and the only restriction is the extent of one’s creativity, so it’s no surprise that a game with infinite replay value has made waves in the gaming industry and remains both a best-selling game and a thoroughly enjoyable open world experience.

Set in yet another post-apocalyptic environment, similar to Horizon Zero Dawn, Bethesda Game Studios’ Fallout 4 encompasses Boston and Massachusetts. The story takes place 210 years after “The Great War,” an event which triggers a nuclear holocaust, wherein the sole survivor of the aforementioned devastation emerges from cryogenic stasis in an underground fallout shelter known as Vault 111. After the sole survivor’s wife is murdered and son kidnapped, they must venture out into post-apocalyptic Boston to search for their missing child. In order to survive the dilapidated world, players can complete quests and acquire resources to upgrade armor, weapons and character stats.

Fallout 4 received ample praise for featuring incredible world depth, environmental freedom, hour-long playability and an incredible soundtrack mixed with believable voice acting. Among various other accolades, Fallout 4 was awarded the Game of the Year at the Academy of Interactive Arts & Sciences and Best Game at the British Academy Games Awards. IGN in their Fallout 4 review perfectly articulated the appeal of the Fallout series’ fourth installment: “The world, exploration, crafting, atmosphere, and story of Fallout 4 are all key parts of this hugely successful sandbox role-playing game. (It is) an adventure I’ll definitely replay and revisit. Even the technical shakiness that crops up here and there can’t even begin to slow down its momentum.”

Released in 2018 to immense critical and commercial acclaim, Marvel’s Spider-Man became a must-have PlayStation exclusive. In the game, Spider-Man must track down and confront the criminal overlord Mister Negative, who orchestrates a plot to seize control of New York, all while dealing with the personal challenges presented to his civilian persona, Peter Parker. As Spider-Man, Peter Parker can freely move around the entirety of New York City, interact with NPCs, accept missions and upgrade gadgets and suits. Marvel’s Spider-Man features a unique universe known as Earth-1048, which was adapted into novels, comic books and further media, all while stating no similarities to existing Spider-Man publications.

Although some critics bashed Spider-Man‘s open-world design for a lack of innovation, the game went above and beyond as far as narrative, characterization, combat, and the mechanics of Spider-Man’s web-swinging. Reaching a similar milestone as Mojang’s Minecraft, Insomniac Games’ Spider-Man went on to become one of the best-selling PlayStation 4 games of all time, releasing several expansions packs and additional content post-launch. The roaring success of Marvel’s Spider-Man soon led to the release of an identical title — called Marvel’s Spider-Man: Miles Morales — which focused on Spider-Man’s ally and friend, Miles Morales.

Many of the game’s mechanics were derived from Rockstar’s previous endeavors like Red Dead Redemption. While Michael, Franklin and Trevor are free to commit crimes, there are consequences for doing so as a “wanted” status will indicate the aggression of law enforcement in response to the acts. Rather significantly, Grand Theft Auto V — which was extensively marketed and widely anticipated — broke sales records and didn’t just make history in the gaming sector, but also became the fastest-selling entertainment product ever made, earning $1 billion within three days of launch. Behind Minecraft, it is the second best-selling video game of all time.

The third installment in The Witcher series and the sequel to 2011’s The Witcher 2: Assassins of Kings, CD Projekt’s The Witcher: Wild Hunt operates in an open world from a third-person perspective whereby players control Geralt of Rivia, a monster-killer known as a Witcher who’s searching for his adopted daughter. Players battle the many hostile creatures using various weaponry and magic, all the while interacting with NPCs and completing quests to obtain experience points and gold, the currencies used to better Geralt’s abilities and purchase resources.

Largely considered to be a marginal improvement on its predecessors, The Witcher 3 became one of the greatest RPGs of all time, as well as, coincidentally, one of the greatest open-world games ever made. Rather masterfully, CD Projekt were able to craft a visually inviting world without compromising open-world gameplay mechanics that allowed for more immersive interactions such as completing minigames, building relationships/romances and talking to in-game store owners and vendors. GamesRadar’s Tom Senior praised the open world in his review, describing it as an “exciting realization of the Ronin fantasy.”

Credit for Elden Ring making this list goes to George R. R. Martin, the author behind fantasy novels in the A Song of Ice and Fire series, which were eventually adapted into live-action with the Emmy Award-winning HBO series Game of Thrones and its prequel series House of the Dragon. Martin was responsible for the worldbuilding, which simulates an interactive open world known as the Land Between. Players control a customizable character striving to repair the Elden Ring and become the new Elden Lord. Developers FromSoftware modeled the game after their existing Dark Souls series, wherein Elden Ring acted as an upgraded version of the former.

As with many of FromSoftware’s games that came before it, Elden Ring‘s plot was designed to be ambiguous and open-ended; FromSoftware wanted players to interpret the story for themselves via flavor text and discussions with NPCs that could be easily missed. Additionally, It was often noted that exploration and discovery were the key components and main appeal for Elden Ring, which is telling of its worldbuilding properties. The Guardian‘s Simon Parkin called the game’s environments “intriguing and inventive.” In fact, many reviewers agreed that it was Elden Ring‘s side stories — rather than the overarching plot — that kept them enthralled, thereby rewarding full completion of the game and a thorough exploration of its contrasting environments.

The fourth installment in the Batman: Arkham series and a direct sequel to Batman: Arkham City (2011), the widely anticipated Batman: Arkham Knight released in 2015. Set after the events of Arkham City, the story follows Batman as he confronts Scarecrow, who has launched a city-wide attack on Gotham. Scarecrow, along with the mysterious Arkham Knight, plans to unite the Rogues Gallery to defeat Batman once and for all. In Arkham Knight, Batman can freely move around Gotham City, interacting with characters (some PC and others NPC) and accept missions, unlocking different areas and side quests after progressing through the main story.

Within the environment, Batman can choose objectives based on the player’s preference, but many areas become locked until the main story is either progressed or completed. Batman can engage in combat, encounter characters purposely or by chance, ride in the Batmobile or simply glide/grapple around Gotham to his heart’s content.