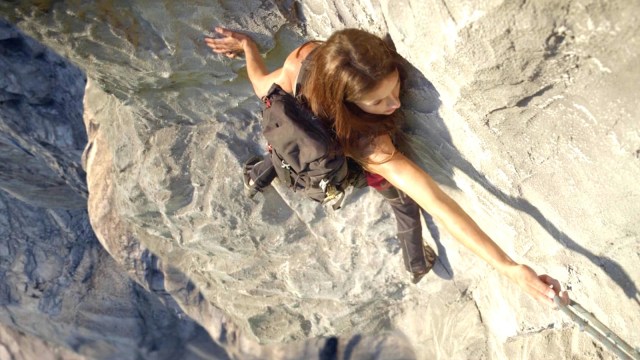 An unassuming low budget thriller with an eye-catching premise isn’t the easiest thing in the world to stumble upon from the perspective of the filmmakers tasked to develop the project, so praise should be aimed towards The Ledge for its intriguing central conceit.

However, the concept isn’t particularly well-suited for a feature film, which leaves the end product padding out its runtime to unnecessary proportions, yielding increasingly disappointing returns as the minutes tick by. Then again, it hasn’t exactly harmed the prospects of director Howard J. Ford’s would-be nail-biter on streaming, with FlixPatrol outing The Ledge as one of the 10 most-watched titles on Hulu.

That’s a fantastic return for a British genre film, although the hook does admittedly make for an excellent selling point. Two friends set off on a rock-climbing trip, but one of them ends up as the victim of a murder. For better or worse, Brittany Ashworth’s Kelly has caught the whole thing on video, with the quartet of killers hot on her tail.

Forced upwards out of necessity, she ends up within mere feet of her pursuers, forcing both parties into a drastic race against time to defeat each other, and the elements, in order to ensure survival.

As mentioned previously, the broad strokes of The Ledge had the potential to deliver an absolute doozy, but a 38 percent Rotten Tomatoes score and 21 percent user rating hints that it missed the mark by quite a distance. Fortunately, streaming crowds across the pond don’t appear to have been deterred at all.