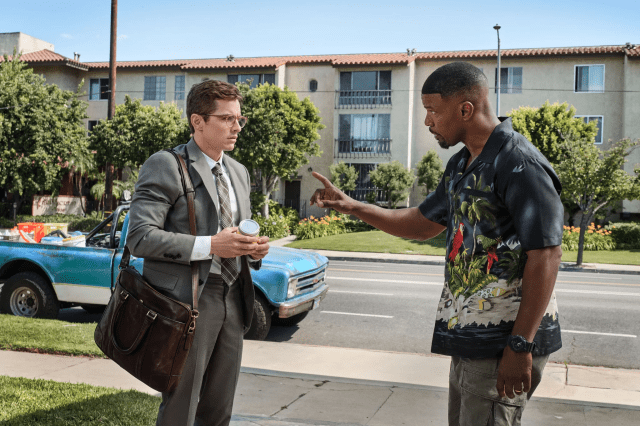 It costs millions of dollars to get a big studio movie made, but it all still starts with a conversation and some excitement. Case in point: Day Shift director J.J. Perry and producer Chad Stahelski had a fun night out with none other than Keanu Reeves, and that meeting ended up being the thing that got the film moving forward.

For the uninitiated, Day Shift is a Netflix movie about vampires starring Jamie Foxx. Foxx plays Bud Jablonski, a pool cleaner who uses his job to sniff out secret vampires. Check out the trailer below.

Perry and Stahelski had been friends for a long time, and the latter was the stunt coordinator on John Wick: Chapter 2, according to EW. Perry said the two had an extensive working relationship as well.

“Chad Stahelski is one of the first people I met when I got out of the Army. We came up through the stunt business together through the ’90s, and I helped him with with the action [on] John Wick 1, with John Wick 2. After John Wick 2, a ton of people started throwing scripts at me. They were like, ‘Oh, you’ve got to direct, you’re next.'”

The two decided to work on the movie after a night out with none other than Reeves himself. Stahelski recalled the unforgettable night:

“We were all in London. I think Keanu was doing a little pre-release press for John Wick 3 and we’d all met up. We were having a little drink in this very mellow lounge-y kind of environment. Keanu’s known J.J. for years. It’s just nice to sit and talk when there’s no press or anything. And then, two Scotches in, you start going, ‘Oh, that would be great,’ and you literally stop the party, and it becomes this whole creative session.”

Then Stahelski asked Perry if he had any projects he could help with; Perry said he had some trial action footage for Day Shift:

“I emailed him the [footage] of the fight. As soon as he saw it on the way to Heathrow, he said, ‘Holy f—, how’d you get those girls to do that? Oh, my God, it’s ridiculous.’ By the time he landed in LAX he was, like, ‘We’re f—ing making this movie.'”

“Jamie Foxx stars as a hard working blue collar dad who just wants to provide a good life for his quick-witted daughter, but his mundane San Fernando Valley pool cleaning job is a front for his real source of income, hunting and killing vampires as part of an international Union of vampire hunters.”