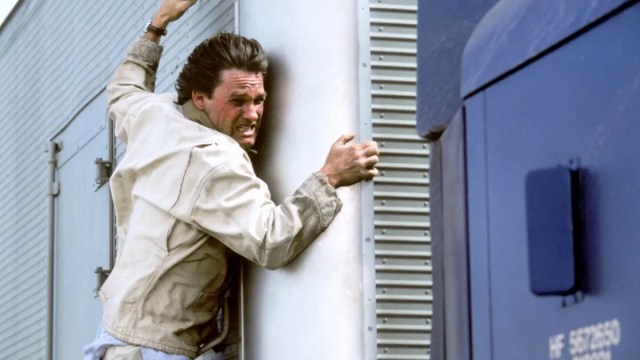 Depending on who you ask, either the 1980s or the 1990s was the true Golden Age for action cinema. With so many classics coming out of the woodwork and quality movies everywhere you looked, though, there were bound to be more than a few buried treasures that slipped through the cracks – and 1997’s Breakdown is most definitely one of them.

Co-written and directed by future Terminator 3: Rise of the Machines architect Jonathan Mostow, the high concept caper stars the always-reliable Kurt Russell as Jeff Taylor, who experiences car trouble while on a cross-country drive with his wife. The stranded pair catch a ride with late, great character actor J.T. Walsh’s truck driver, who gives them a lift to a diner where they can call for help.

However, once Jeff makes the phonecall in question, he emerges to find his wife missing – and Walsh’s Red pleading ignorance. From there, Breakdown evolves into a frenzied hybrid of chase thriller, road trip actioner, and cat-and-mouse mystery, and an excellent one at that. We’re not here to claim that it’s underrated when the film was greeted with praise right from the off, but a disappointing box office haul of $50 million on a $36 million budget wasn’t what it deserved.

It’s been shut out of the conversation too long when it comes to naming the best actioners to emerge from what was comfortably the most fertile period in the genre’s history, too, but Redditors will not stand for it any longer. The Breakdown appreciation brigade is alive, well, and out in full force, because 25 years being left in the shadows of the classics is not what the unsung classic deserves.