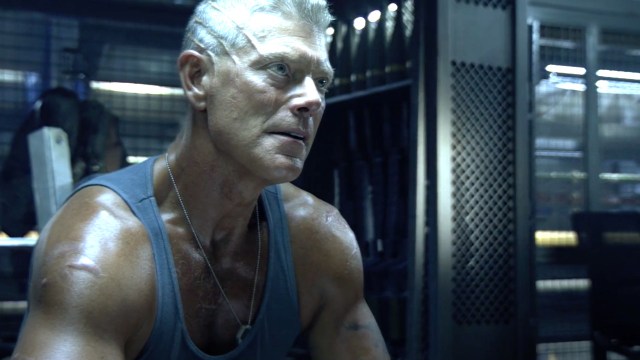 Avatar: The Way of Water star Stephen Lang is revealing how his character, Colonel Miles Quaritch, has changed since the first movie now that he himself is a blue humanoid known as a Na’vi.

Once again, Quaritch will be the villain in the sequel to the 2009 smash hit Avatar, which to this day is the highest-grossing movie of all time. However, Quaritch received what we then thought was a fatal puncture from some Na’vi spears on Pandora at the end of Avatar, so what gives?

Well, just like how Sam Worthington’s Jake Sully regained the use of his paralyzed legs by way of placing his consciousness into the body of a Na’vi through the Avatar Program in the first movie, so too did Quaritch get a new lease on life by being reborn as a Na’vi, it would seem.

Lang was asked in a recent interview how Quaritch’s character has changed since the first movie since he now lives in the body of a species that was previously his sworn enemies. It turns out, “Quaritch is born and reborn under the same aggressively wayward star.” As Lang explained in an interview with Fandango:

“[His] world, his DNA, his ethos, everything about him is destined for combat, for aggression. I don’t know what to say other than that…it’s almost a physical trait for him. He can do no more, he can do no less than that. His name Quaritch rhymes with ‘war.’ He’s got an itch for war, it’s quarrel, it’s everything about it…and that has not changed. He’s brought that fundamental Quaritch-ness to him in his new incarnation.”

However, that’s not to say Quaritch is the same, somewhat one-dimensional villain we see in the first movie, who was depicted as a human military leader that will stop at nothing when it comes to demolishing the planet of Pandora in order to mine its precious mineral, Unobtainium. Indeed, Quaritch existing as a Na’vi makes him inherently connected to Pandora’s life force, known as Eywa, in the sequel. And this connection, which contrasts sharply with Quaritch’s own war-mongering nature, proves to be a “conflict” within the character, Lang said.

“I’ve always felt that Pandora represented kind of a fluid and movement and curves. Whereas Quaritch was always meant to be right-angles…he thinks in right-angles, he moves in right-angles. Now his conflict is that, yeah, that’s all there, but there’s this other stuff coming in there too, which is…maybe it’s Eywa, I don’t know what it is.”

Honestly, this extra dimension to Quaritch’s character sounds like it could add up to a stronger overall villain than in the first movie. Although 2009’s Avatar is highly acclaimed, the somewhat stock villains were criticized by some, even though Lang’s Quaritch and Giovanni Ribi’s evil CEO Parker Selfridge dutifully chewed the scenery throughout.

Avatar: The Way of Water comes to theaters on Dec. 16.