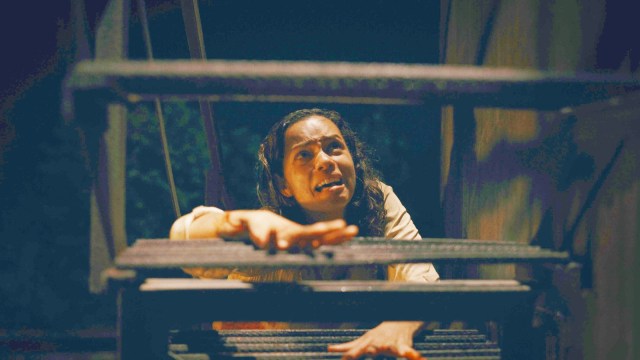 There are times when the foulness of horror inevitably translates into real life, and the movie Barbarian certainly did the trick. Already in an environment where gnarly elements and scenes are incessantly unavoidable, horror sets are a magnet for anything and everything that is utterly obscene, and it seems as though the Barbarian set was not an exception to the rule, as per the testament given by lead star Georgina Campbell.

Barbarian saw its release in early September, gathering immediate reactions due to its nearly perfect Rotten Tomatoes score as the ideal gut-wrenching horror film. The gore-drenched sensation sees Campbell’s character discovering a sinister presence lurking on the walls of her Airbnb, and much to everyone’s surprise, even the horrifically gross scene where Tess comes across The Mother was just as “disgusting” to fans as it was to the actors.

In the scene, the character played by Matthew Patrick Davis is a deformed naked woman who is a product of inbreeding. As a result of her rapist father’s antics, The Mother is only acquainted with violence, and oddly enough, she still has a motherly instinct that she gathered from a video playing on repeat. As a result of Tess’ ventures into the secret rooms of the house, the character is only allowed to survive as long as she lets The Mother…”mother” her. For this reason, Tess must drink a baby bottle filled with milk and visible hair hanging off the bottle.

Naturally, the actress played it off as a nonsensical scene to shoot, telling Digital Spy that “it was hard not to laugh because as soon as that bottle came down, we were all like, ‘Oh my God, this is ridiculous,” however, the unforgettable scene quickly turned into an even more disgusting experience than initially anticipated.

“The hair was a development. There’s a lot of hair on [The Mother], so I think we’d done a couple of takes and then we were doing a take where Zach [Cregger, writer/director] was yelling at me things to do, so he was like, ‘Make the milk splutter out your mouth a bit, make it gross!’ Suddenly there was a hair there and then he was like, ‘More hair! Add more hair’ so someone’s coming in, shoving hair onto it. It was disgusting. Yeah, what we have to do for art.”

Regardless, the actress seems to cherish some of the most nauseating moments on the Barbarian. In a recently-released deleted scene, a masticated rat is forcibly fed to AJ, played by Justin Long, and the actress admits that she is “so glad they’re releasing [the scene].”

In spite of the bottle-fed human milk and rodent delicacies, the Barbarian is still the number one film on HBO Max, proving that sometimes the grosser the storyline is, the better it performs.