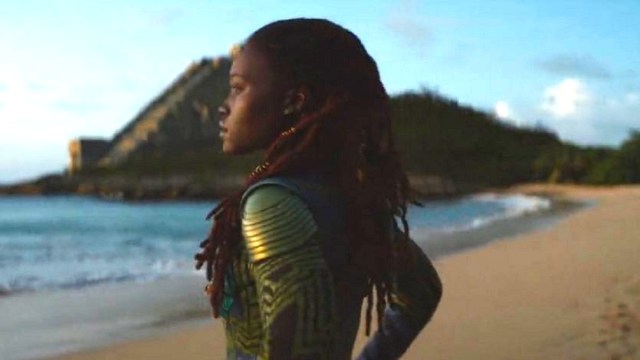 While Namor is new to the franchise, we’ve already met Nakia as the love interest of Chadwick Boseman’s King T’Challa in the original Black Panther film. Since Boseman has sadly passed — and T’Challa as a character has also moved on to the Ancestral Plane in the films — the question remains of how Nakia will pick up the pieces of her life moving forward.

According to a character description from Hasbro‘s toyline, Marvel Legends Series, it would appear Nakia had been away from her home country of Wakanda for some undisclosed period of time.

“Nakia will have to put her reservations aside and return to Wakanda when a new threat arises,” the description reads.

As for Namor, his description reveals a fierce defender of his home world, the undersea realm known as Talocan.

“The ruler of Talocan, an ancient civilization hidden in the depths of the ocean, Namor will stop at nothing to protect his people,” the description on Namor’s action figure page reads.

It’s been speculated that the moniker of Talocan, rather than Atlantis, is related to reimagining the comic origins as being related to ancient Aztec — rather than ancient Greek — mythology. This will hopefully work to differentiate the world from the already-established Atlantis from DC’s Aquaman franchise.

Overall, Black Panther: Wakanda Forever is shaping up to be an emotional adventure that we can’t wait to dive into, based on that spine-chilling trailer alone.