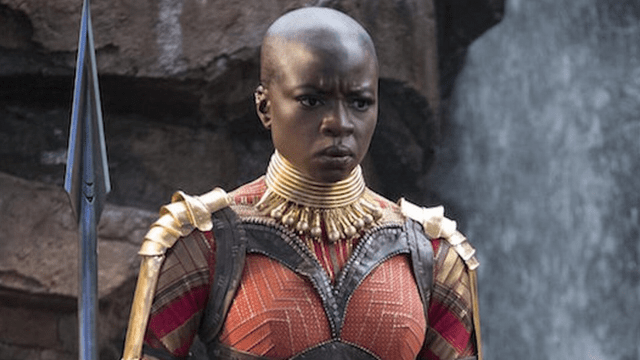 It’s perhaps a bold move to narrow down any one of Black Panther: Wakanda Forever‘s scenes to the single most emotional one in the film; boasting several meaty character arcs, an overarching theme of grief, and a tribute to the late Chadwick Boseman that could shatter the steeliest of tear ducts, it isn’t so much an emotional roller coaster as an emotional rocket ship moving at lightspeed.

Still, this means that there are more than a few contenders for such a distinction, and one of them was brought to life by the fiery duo of Angela Bassett‘s Ramonda and Danai Gurira‘s Okoye, in which the latter was brought to tears by the crushing weight of her unrealized responsibilities. Facing up to her Queen’s grief-fueled fury after Ramonda furiously reprimands the general for failing to protect her daughter Shuri and MCU newcomer Riri Williams from Namor and his warriors, the tension is palpable.

In an interview with /Film, Gurira broke down the nuances of preparing for and executing a scene like that, including the space that Okoye holds in that scenario, and the discomfort one must power through for the sake of the scene.

“There’s something, of course, very devastating about that because of their connection and how she sees her as a mother figure, her connection to this family, and of course, the issue that they’re dealing with and the failing they’re in. So there’s a lot — and of course, a big part of Okoye is that she doesn’t fail. So to experience something that is clearly a failing is also something that compounded the emotion of the moment. And of course the idea of Shuri’s importance to them, to her heart.

But we all also understood the assignment. It was very clear to us and very uncomfortable, even as actors. It’s not fun, even as actors, to come for that. And the other beautiful thing about all these amazing people is that we all are really there for each other. So it didn’t matter if the camera was on Angela or it was on me, we were just giving each other the exact same scene back to back, to back, to back.”

As she’s subsequently stripped of her role as head of the Dora Milaje, one can almost reach out and feel the crippling waves resounding through Okoye’s body, in what stands as one of the hardest-hitting scenes in a film that packs a serious punch from start to finish.