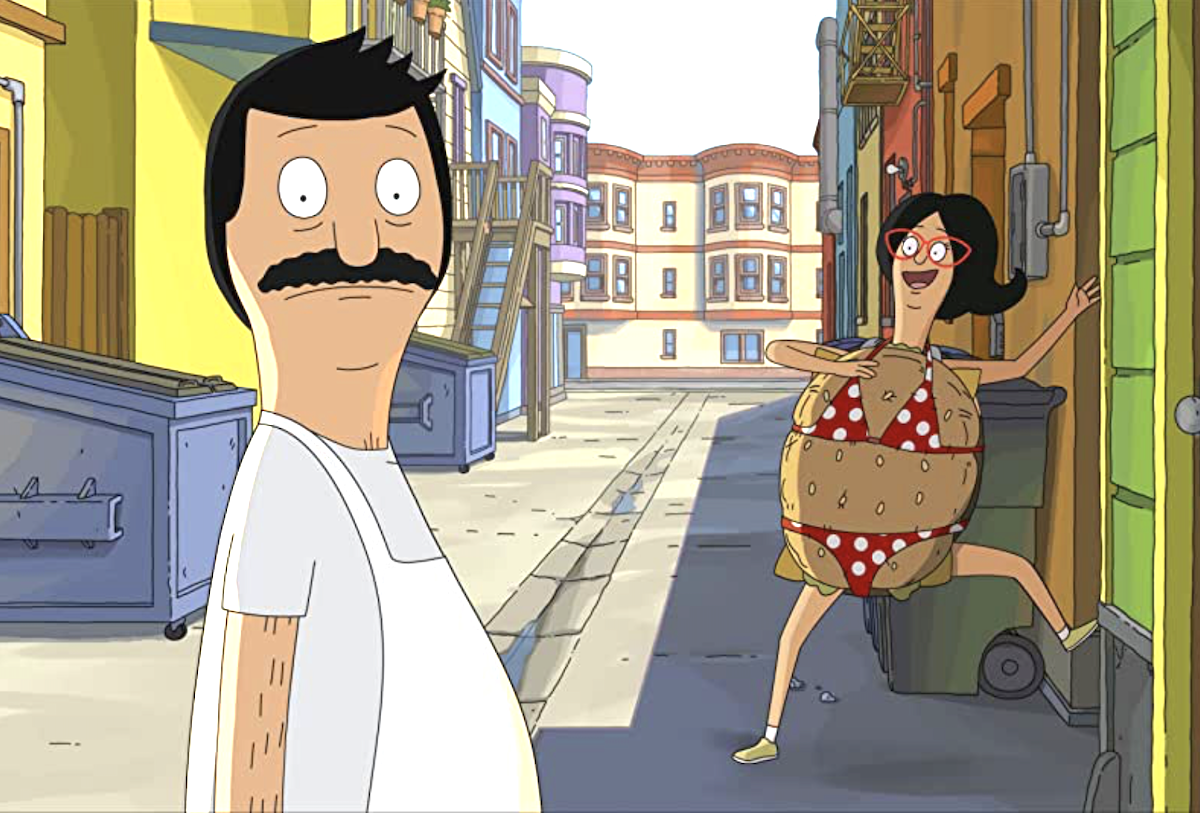 After simmering on the stovetop for several years, making us all salivate and starve for its reality to hit our plates, The Bob’s Burgers Movie is finally here.

It seemed simple — walk up to the counter, place the order, and in no time, a sizzling, mouth-watering movie about our favorite Belchers would be ready to devour. Well, the order for the foodie family movie was made back in 2017, then approved, then delayed, then tabled (not in the good way), then renewed, and after sitting with a grumbling belly all this time, Bob’s Burgers fans will finally get to sit down satisfied with their order served.

The Bob’s Burgers Movie is set to be delivered to theatergoers on May 27, 2022. Some might also notice that this is prime burger time, aka Memorial Day Weekend. Maybe some ambitious theater chain (looking at you Alamo Drafthouse) will have a slew of Burger of the Day-inspired menu items to celebrate the occasion?

What was going on all this time? Did Bob need to replace his stove to get that juicy film order out and onto our plates? Did Teddy sneak in and steal the order because he was too hungry to wait himself? Did Jimmy Pesto (voiced by a new actor after Jay Johnston was reportedly removed from the role and the show) finally take down Bob once and for all? And what wonderful reveals are waiting for us on the other side?

Here’s how we finally got to this point. Feel free to narrate in your best H. Jon Benjamin voice (I know I am).

In an interview with NME, creator Loren Bouchard broached the idea of a movie centered around the lovable Belchers and their rotating cast of characters.

“Yeah, we’ve just started talking about it. If it had come up a few years ago, I think it would have felt too hard and not right for the material, but the shift has been because we’ve been able to write musicals. The idea of a Bob’s Burgers movie that is a musical is an exciting challenge that we’re interested in taking on, and we’re just beginning to discuss it.”

The 8th season of Bob’s Burgers premiered on the heels of the wildly popular “Bob’s Burgers Live” tour featuring the cast doing live readings and performances for a third consecutive year. Bouchard announced that FOX was developing the film with a then-announced release date of July 17, 2020.

“We’re thrilled to be invited to bring Bob’s Burgers to the big screen,” Bouchard said. “We know the movie has to scratch every itch the fans of the show have ever had, but it also has to work for all the good people who’ve never seen the show. We also know it has to fill every inch of the screen with the colors and the sounds and the ever so slightly greasy texture of the world of Bob’s ⏤ but most of all it has to take our characters on an epic adventure. In other words, it has to be the best movie ever made. But no pressure, right?!”

At the San Diego Comic-Con, speculation was abound about the movie and season nine of Bob’s Burgers, where a few clips of the upcoming season were debuted. During a panel, Bouchard again confirmed the presence of an impending movie, but the ticket was still just dangling there ready to be fulfilled, as he said there was no official release date at that time.

Days before the conclusion of the 9th Season, Disney announced a premiere date for the film, reiterating the release date of July 17, 2020.

Back at Comic-Con again ahead of the upcoming season 10, Bouchard touched on the musical element that is so prominent in the show and how it would translate to the silver screen singing and dancing.

At first blush, Bouchard even teased the movie as a musical. Would that mean musical numbers perhaps written by some big hitters who would make guest appearances side-by-side with the whole cast? A storyline following Broadway musicals and playing off the Bob’s tours and live reads?

“We have been very, very hard at work on the ‘Bob’s Burgers’ movie,” Bouchard told the audience at 2019’s Comic-Con. “There’s a lot we can’t talk about. It’s hopefully going to be a ‘Bob’s Burgers’ gift to you, [the fans], if we do our job. It’s a musical. It’s a mystery. […] We are very, very excited that that’s part of our day-to-day right now.”

Going on further about the potential storyline, Bouchard, according to IndieWire, told the audience that Bob’s parents would play a part in telling the story of the film, along with some secrets revealed — such as what is the fluffin’ real deal with Louise’s ear-hat.

“Some of that is going to be in the movie,” he said. “A small amount. I think it’s strongly suggested that [his mother] died, and I think that’s important to me — and to Bob’s character — that she’s a bit of a hole in his life.”

FOX Animation’s acquisition by Disney began to affect production and release dates, and Bob’s original release date was shuttered as it was removed from the release schedule. Or was it?

After news broke, Bouchard answered a plea on Twitter with “Fear not” — an indication that the movie was still a go.

Then, Disney claimed it was a total mistake ⏤ like maybe some raw meat was contaminated or maybe a rumor about the patties being made from people ⏤ but it was all false. A rep from Disney told CNET that the grill was fired up, the patties were all Grade-A, and the staff was on the clock — meaning, Bob’s Burgers – The Movie, as it was called back then, was still slated for the July 17, 2020 release.

As it was no longer safe to go into a burger joint, real or fake, or movie theaters anymore due to the outbreak of COVID-19, Disney announced that the release of the movie was pushed back to April 9, 2021.

While production delays and more continued for plenty of projects across the spectrum during the pandemic, Benjamin let fans know that the cast and crew were continuing to work on the movie.

“There’s definitely progress. We’ve started recording the audio as best as we can. Everybody’s working from home, but I know they’ve created animatics for a lot of it. So far, I’ve logged four or five sessions, and done a first pass for the movie. I think it’s on track to be released in the spring, but I don’t know if it’s going to stay that way. They’re working on it aggressively now, as best as they can.”

Bouchard addressed why the movie would still have a theatrical release, and not be put to streaming, in an interview with Entertainment Weekly.

“We talked about [streaming] as it pertains to the movie and we decided we really want the movie to come out in theaters because Bob’s is already on TV,” he says. “Of course, we want everyone to be able to safely see it in movie theaters. We don’t want anyone to put themselves at risk. But assuming there’s a point at which everyone can go back to theaters safely, we’re excited about Bob’s the movie being seen in the theater, in the dark with other people, because that’s something we’ve never been able to do before. That’s the main course that we’re delivering to people, in this case.”

Still no sizzle on the grill. A release date for the movie was pulled by Disney, with no new release date announced even as other films got updated, readjusted dates. Fans worried that maybe Bob’s burgers were burnt when it came to the film hitting theaters.

The official trailer — and synopsis — for the now-titled The Bob’s Burgers Movie has arrived!

It seems that it will, at long last, move from the small screen to the big screen as a “musical-comedy-mystery-adventure,” which, hah, is how you could describe the entirety of the endearing cartoon. The official synopsis of the long-awaited movie is as follows:

“The story begins when a ruptured water main creates an enormous sinkhole right in front of Bob’s Burgers, blocking the entrance indefinitely and ruining the Belchers’ plans for a successful summer. While Bob and Linda struggle to keep the business afloat, the kids try to solve a mystery that could save their family’s restaurant. As the dangers mount, these underdogs help each other find hope and fight to get back behind the counter, where they belong.”

Zany and intelligent, heartwarming and gut-busting, Bob’s fans are ready for it all. There are plenty of ways the movie could go with the myriad of intertwined and standalone storylines that have popped up over the show’s 12 seasons.

We can’t wait to get the patty started on May 27. For more, check out our original coverage of the trailer release here.