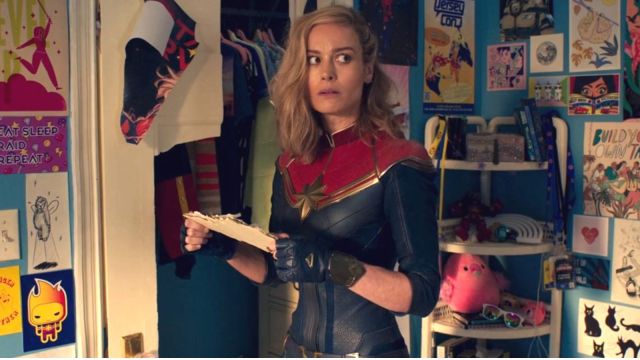 D23 saw a heap of teases for upcoming projects and Brie Larson decided to go above and beyond to “spoil” The Marvels during an interview on the red carpet.

The long-awaited sequel to 2019’s Captain Marvel saw a teaser air at D23 Expo, with stars Larson, Iman Vellani, Teyonah Paris, and director Nia DaCosta in jubilation on stage. Little is known of the film so far, with the plot following the three superpowered individuals teleporting every time they use their powers.

But thanks to Larson, we’ve got a red hot scoop which may just spoil the entire plot of the film. While Marvel stars often hold thei cards very close to their chest, she has decided to flash it all. Speaking to FabTV, she gave way for an ultimate reveal for the film when asked what she can share.

“It is a feature film that has characters in it. Some people have suits on, like superhero suits, and some people wear civilian clothes. There is a problem, and we have to figure out how to solve it. I hope I didn’t spoil it too much.”

There you have it, the film sees a mixture of superpowered people and non-powered people work together to solve a problem. It’s hardly surprising Larson gave such a sarcastic answer considering how inane a question it was. Perhaps if it was Tom Holland being interviewed the beans would’ve been spilled.

One of the biggest mysteries for The Marvels is who Zawe Ashton will be playing. The British actress has signed on in a villainous role, with Larson giving it a slight tease in Dec. 21. We Got This Covered previously predicted Ashton will play Sui-San, the mother of Thanos.