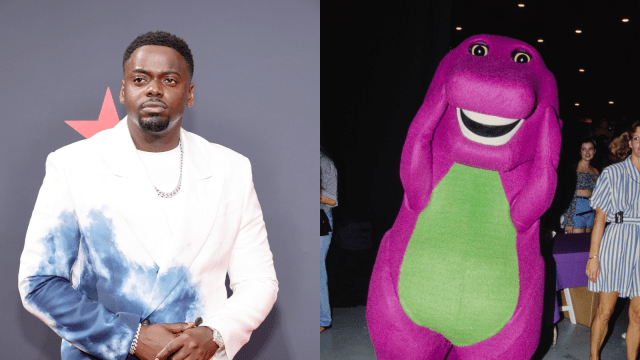 In 2020 movie fans were treated to some surprising news when star Daniel Kaluuya shared that he was currently working on a movie reboot of the children’s character Barney the Dinosaur. Well, fortunately, it’s still in the works.

During a recent interview with The Hollywood Reporter, Kaluuya shared an update on the film which is currently back in the writing process. Right now, the movie is undergoing rewrites and is still in the early development phase.

News about this film has been known for many months now, but this is the first update that has been given regarding where it is at. Sadly, fans shouldn’t expect to see the movie for quite some time.

In late 2021, Kaluuya shared with Entertainment Weekly insight into the film which he is producing with his company 59% Productions, sharing a grim spin on the purple dinosaurs’ catchphrase.

“Barney taught us, ‘I love you, you love me. Won’t you say you love me too?’ That’s one of the first songs I remember, and what happens when that isn’t true? I thought that was really heartbreaking. I have no idea why but it feels like that makes sense. It feels like there’s something unexpected that can be poignant but optimistic.”

It is worth noting that Kaluuya has no plans to star in the movie and at this stage no names have been attached to the project.

Fans can catch Kaluuya starring in the new Jordan Peele film NOPE when it lands in theaters on July 22.