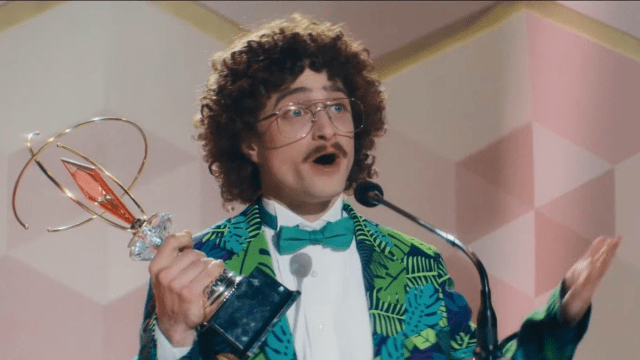 Image via The Roku Channel

Actor Daniel Radcliffe has been in a number of films throughout his life with a variety of plots and tones. Some have been light, and others have been incredibly silly. One of those roles had him as a flatulent dead man but, apparently, being Weird Al Yankovic actually tops that one.

Radcliffe makes the comments about his role in Weird: The Al Yankovic Story in a new piece in Empire’s latest issue. The film about the famed parody artist comes out in November and is distributed by the Roku Channel. It will not take Yankovic’s story seriously, and is instead intended to satirize biopics and somehow, Yankovic can apparently have a menacing undercurrent at moments.

“I travelled with an accordion so much for this film, and had this major fear of going through security and them suspecting it was a bomb. You know, to prove it’s not an explosive. Do you know how stressful that would be?! It’s a very difficult instrument to play! The thing that’s so fascinating about Al is that he manages to thread the needle between wholesome and genuinely weird. He can be childishly surreal, with a real edge of madness and danger to him. There’s one scene involving an LSD trip that’s probably the most bizarre thing I’ve ever done. And that’s saying something… [I love] films where, if you can justify it in the script, you can do anything. You can have a guy with guns for hands or a dead corpse with magical powers.”

Audiences will get to see it all soon enough. Reviews have described the piece as charming, and it even features Quinta Brunson as Oprah. While this suggests a lot of promise, Radcliffe has also said earlier this year he will be heartbroken if it does not meet expectations. He has referred to it as one of the best things he has ever shot, says it goes fast, and cannot wait for it to come out. Radcliffe has no other projects on deck after its release, but has created a wildly varied filmography for himself since his time as Potter came to an end. He was the villain in The Lost City, led Guns Akimbo in 2019, and on television has popped into work like Miracle Workers and appeared as a prince in a special interactive episode of Netflix’s Unbreakable Kimmy Schmidt property.

Weird: The Al Yankovic Story arrives on the Roku Channel on Nov. 4.