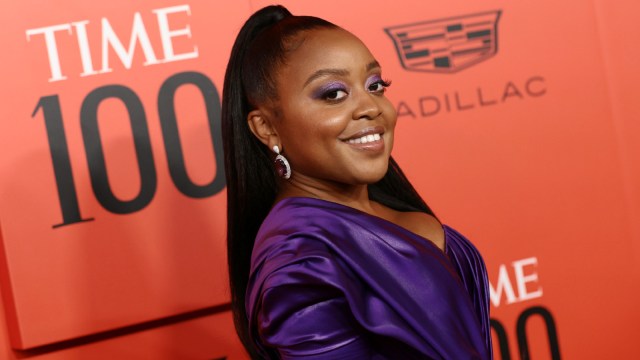 The Roku Channel’s Weird: The Al Yankovic Story just got another fun addition to the cast on Tuesday, as it has now been revealed that Abbott Elementary creator and star Quinta Brunson will be playing Oprah Winfrey in the upcoming biopic.

Brunson shared a behind-the-scenes first look of herself in costume next to Daniel Radcliffe, who is starring in the titular role of “Weird Al” Yankovic himself. “Let’s get #weird,” the 32-year-old wrote, retweeting the Film Updates Twitter account. She likewise shared the image to her Instagram stories.

The Philadelphia native is joining an already stellar cast, including Evan Rachel Wood as Madonna, Rainn Wilson as Dr. Demento, Toby Huss (The Adventures of Pete & Pete) as Al’s father Nick Yankovic, and Julianne Nicholson (Mare of Easttown) as his mother Mary.

Meanwhile, Bruson is also coming off hot from last week’s Emmy nomination announcements, in which she made history by being the first Black woman to score three nominations in the comedy categories for comedy series, lead actress in a comedy, and writing for a comedy series. Not to mention, she also became the youngest Black woman to be nominated in the comedy acting category.

Weird: The Al Yankovic Story doesn’t yet have a premiere date, but is expected pop up on The Roku Channel sometime this fall.