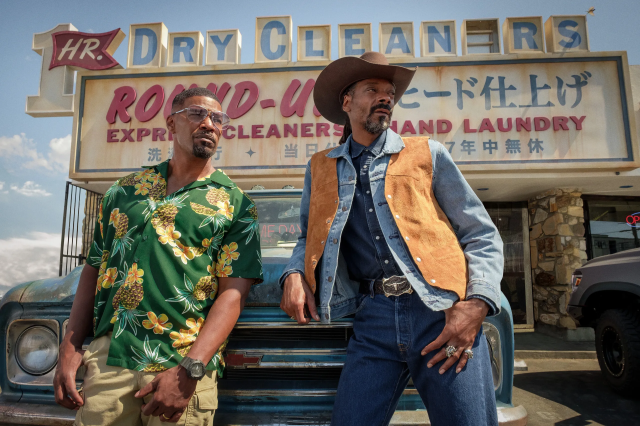 When we see Snoop Dogg billed on a film’s cast, the kneejerk reaction is to assume an upcoming stoner comedy; with films like Good Mourning, The Beach Bum, and Mac & Devin Go to High School under his belt, the rapper’s reputation tends to precede him.

But J.J. Perry had other ideas when bringing him on for Day Shift, the upcoming action-comedy film in which Jamie Foxx makes his turn as Bud Jablonski, a blue-collar pool cleaner struggling to provide for his family in Southern California. To make ends meet, he moonlights as a freelance vampire exterminator; the potential for shenanigans speaks for itself.

Snoop Dogg will portray Big John Elliot in the film, a friend of Bud’s who’s trying to get him back into the slayer’s guild, which would let Bud upgrade from freelance pay to the guild’s steady wages and other perks. It’s a detour from Snoop’s typical characters, but Perry was all too happy to take the challenge.

In an interview with Vanity Fair, Perry remarked on the conversations he had with Snoop Dogg about the role, drawing on their shared connections with the military and ultimately declaring that he wanted Calvin Broadus, Snoop Dogg’s real name, to play this character, not Snoop Dogg.

“My whole pitch to him was: I’ll make you an action star, brother. I said, ‘Look, I don’t want Snoop to be Big John. I’m hiring Calvin Broadus to play Big John, who was inspired by my platoon sergeant.’ And Snoop said, ‘Well, my father was in Vietnam.’ My dad was in the Army too, so we had this common thread. I said, basically, ‘I want you to play your father,’ because his father was Southern. I said I want to take away all of that L.A. swagger and give you more of a country swagger.”

Whether or not Day Shift manages to stand out in a sea of vampire media is yet to be seen, but we’ll be guaranteed freshness in the form of Snoop Dogg expanding his acting range, and that alone might just draw the crowd the film needs.