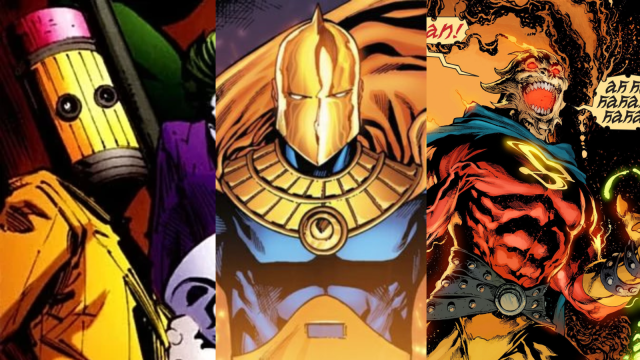 In a universe as large as that of DC Comics, it only makes sense that some of the more obscure characters get pushed to the side while the big names flourish. Fans are now talking up the obscure characters they’d love to see shine in their own film.

There’s been some sillier and stranger characters introduced to the DC Extended Universe since it began with the humble origins of Man of Steel, with both attempts at a Suicide Squad movie casting a wide net to catch as many B-list and C-list characters as possible.

Fans have decided the weirder, the better, as they list off some unknown characters they think should get their own film, thanks to a post on Reddit.

A lot of diehards are gunning for a Doctor Fate solo picture, with the character being played by Pierce Brosnan in the upcoming Dwayne Johnson-led Black Adam. But a bit of an appearance isn’t what fans want, they want him in the spotlight. Perhaps with Zatanna too.

The answer to the question above is also The Question. The man with a face punctuated by a punctuation mark is top of the list, following the character’s 45 year history in comics. Appearing in plenty of animated shows, it’s a character who has that grim detective persona down pat that DC loves for Batman.

Katana and Etrigan also picked up a lot of mentions. Katana did appear in 2016’s Suicide Squad, but was relegated to meme status after that infamous introduction. Her sword may trap the souls of her enemies, apparently.

Etrigan meanwhile is a full-blown demon, and would likely end up much more like a Doomsday or Darkseid type of villain visually. The DCEU has a love for the third-act CGI monster man trope, so Etrigan would fit in just fine.

Booster Gold and Blue Beetle have at many times been paired together in comics, and for a while it looked like they’d end up in a DCEU film together according to rumors in 2016. Since then, there’s been radio silence and fans still want them to front a future blockbuster.

For now, DC fans will have to make do with the tidbits of the obscure heroes, such as when Black Adam arrives in theaters Oct. 2022.