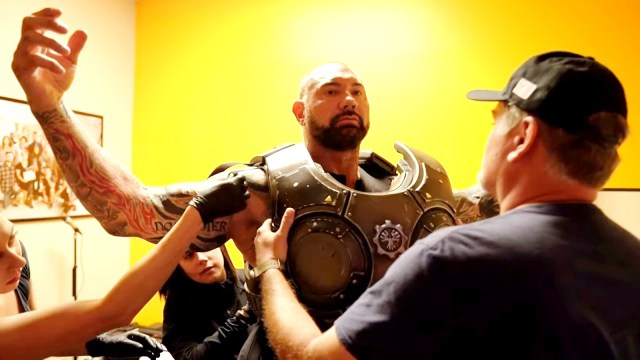 Dave Bautista is officially putting his hat in the ring when it comes to nominating himself to helm the upcoming Netflix adaption of Gears of War.

“I can’t make this any easier,” Bautista said in a Twitter post while sharing a video of himself donning the iconic armor of The Coalition and proclaiming “it’s about damn time.”

Is this our first look at the upcoming movie in question?

For all we know, this could indeed be a tease that he is involved in the movie. On the other hand, it could simply be Bautista publicly stating his support of the long fan-petitioned casting of him as Marcus Fenix in the forthcoming movie. The clip itself that Bautista shared is not from any upcoming movie, but a trailer from 2019 promoting a DLC to play as Bautista in Gears 5 (below).

Not only are the fans supportive of Bautista in the role, but original Gears creator Cliff Bleszinski voiced his approval as well.

Guess we’ll just have to keep an eye on Netflix’s Twitter account to confirm any official casting decisions that might be announced, which they’ve so far been mute about, other than announcing the movie itself.

Despite Bautista’s tweet being far from an official announcement, fans were quick to voice their support for the actor getting the role he clearly desires so strongly.

“This would be perfect casting so they’ll probably end up getting Tom Holland,” wrote one commentator clearly roasting Netflix’s somewhat infamous track record with making adaptations, such as the fan-hated Death Note live-action film.

Bautista as Marcus would be “a match made in heaven,” according to one fan, and we can’t say we disagree.

What has Netflix said about its forthcoming Gears of War movie? In their brief announcement, they made no mention of a cast, writer, or director, let alone at which stage the film was being completed. Presumably, that means the movie is still in the early stages of pre-production, which hopefully signals it is still within the realm of possibility that Bautista could eventually be cast in the role. What’s more, the streaming service has also said in the initial Twitter post announcing the forthcoming film that it will be followed by “an adult animated series — with the potential for more stories to follow!”

We’ll be sure to keep you up to date on any further developments for the Gears of War movie.