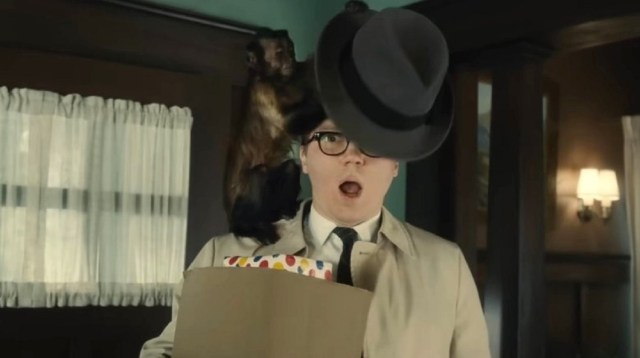 Soon, director Steven Spielberg will present a look at his early life with stand-in fictional characters in The Fabelmans. The piece has received initial acclaim, features some wild shots in the trailer and has some wondering if his mom really did have a monkey.

For those unaware, at one point in the preview of the project, Michelle Williams’ Mitzi Fabelman (a representation of Spielberg’s mother, Leah) brings home a capuchin and says she did so because she needed a laugh. This is met with concern from others in the piece, and, it really did happen as a profile of Spielberg in The Hollywood Reporter revealed. Apparently, Leah was the Peter Pan of the family back in the day. She was free-spirited and, at times, more like a sibling than a parent. In Spielberg, an earlier documentary on the famed director, the 75-year-old explained he and his siblings were scared of the animal, but he did not reveal its ultimate fate. He added that his mom even bringing the depressed animal home from a pet shop showcases how she was not like anyone else’s mother.

“You know, in a normal household kids say, ‘Can we have a monkey?’ and the mother says, ‘Are you crazy?'”

Spielberg’s mother did later say getting the animal was crazy while his father, Arnold, is quoted in an IndieWire piece as saying he liked it. Though the pair are divided, one group who is not are animal rights activists. People for the Ethical Treatment of Animals (better known as PETA) has called out the director in an Instagram post from earlier this year. They said Spielberg has no excuse for not using special effects in The Fabelmans given his earlier successes. PETA asserted that the filming experience is traumatic for a real animal, adding that he is enabling people to purchase an animal they cannot properly care for.

Neither Spielberg nor his Amblin Entertainment production company appear to have responded to PETA’s calls to action as of the time of writing. Just as he has based his characters on his own experience from his youth, Spielberg has also channeled memories of the capuchin character, too. One is on the antagonist team in Raiders of the Lost Ark and even gives a Nazi salute. As well, at one point Spielberg was attached to a movie based on The Curse of Monkey Island videogame, though this did not ultimately come to fruition. For now, his next one will be in the look at his young times.

For now, the monkey has remained in the film, but it’s possible things could change. Movies have previously been edited right up until their premieres and, sometimes, shots included in a trailer are ultimately cut from the final release. It has happened with work from Zack Snyder, and Spielberg himself has changed scenes in movies like E.T. the Extra-Terrestrial for their later re-releases decades after the original.