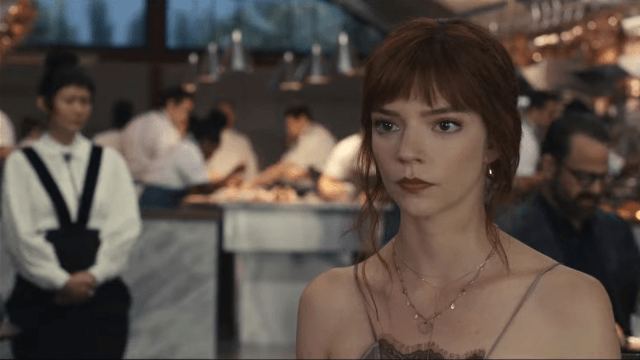 Photo via Searchlight Pictures
Review of:

The following article contains spoilers for The Menu.

Every now and then there comes a horror movie that makes you laugh more than it makes you scream or cringe, and The Menu is one of those movies. Directed by Mark Mylod, who also directed episodes of Succession, Shameless, and Game of Thrones, the film was released on Nov. 18, 2022. The Menu sees a group of rich individuals board a boat to an island to dine in a famous, and exclusive restaurant run by Chef Slowik, as played by Ralph Fiennes.

But once they get to the island, Margot (Anya Taylor-Joy), the girlfriend/revealed-to-be escort of Tyler (Nicholas Hoult), starts to notice that something on the island is off. And once the guests have been seated and the courses start to make their way onto the tables, the night-out turns sinister as people start to die. While the film is a black comedy, it is also a horror film, and it would not be the first time a horror film had something extra at the end of the credits. So let’s take a look at the end of the film and let you know if you will want to wait around.

Does The Menu have an end-credits scene?

The end of The Menu sees Margot, now revealed to be named Erin, make her way safely off the island as she had successfully talked her way into leaving by making Chef Slowik prepare a cheeseburger for her like the ones that he would make when he started his career. She did not eat it all and asked that she be allowed to take it to go, which she was. The kitchen staff then prepared the final dish, which was a tribute to the s’more, setting the restaurant on fire and presumably killing everybody inside it. And the film ends on that explosive ending, with no dessert of an extra scene at the end of the movie.

It would be quite surprising if the movie did have an end-credits stinger setting up a sequel to the film, as everybody dying in the blaze seems like a pretty strong ending. Unless we had a comedic scene with Erin eating her cheeseburger in the middle of the ocean, that could have been quite funny. Ultimately the film is self-contained enough and while a spiritual successor would certainly be welcome, it does not set itself up for a sequel by putting anything but the credits at the end of the film. But you could stay and watch the names of the people who made the movie because appreciating artists is what the movie was ultimately about anyway.

Savor the experience of The Menu while it is being served up in theaters now.