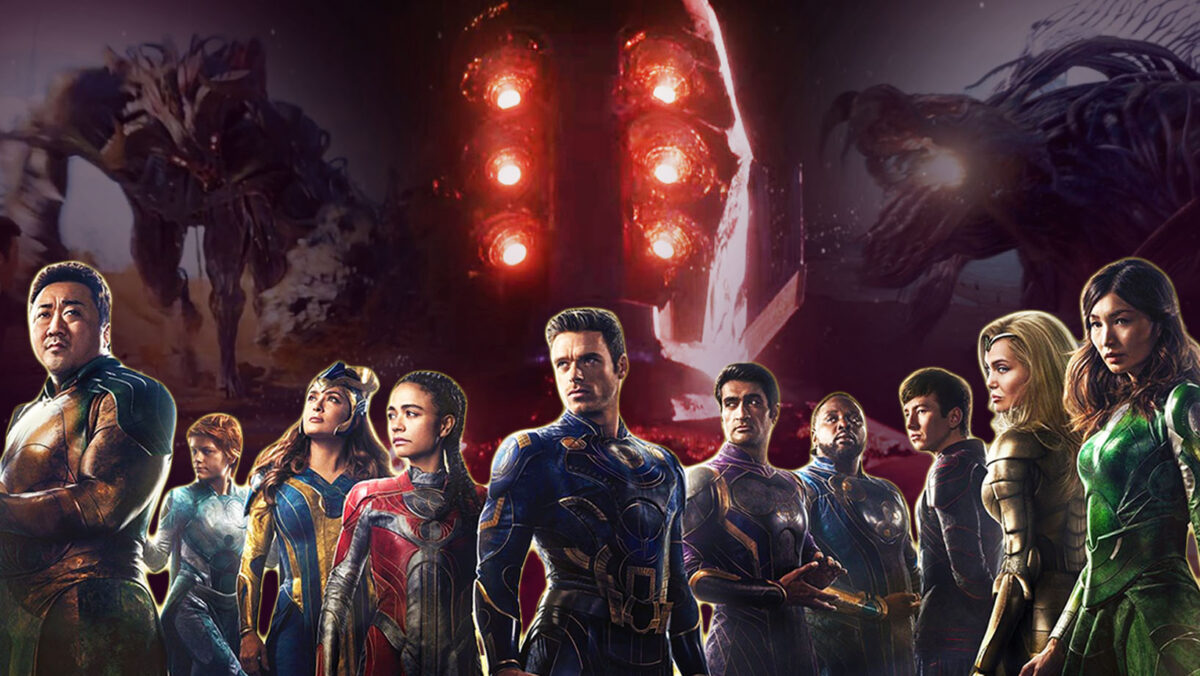 Eternals‘ post-credits scene marked the Marvel Cinematic Universe debut of Harry Styles, in the role of Eros — also known as Starfox, Thanos’ much more carefree brother. Marvel fans can’t wait to see more of Styles in the franchise, so folks were intrigued when Lia McHugh, who plays Sprite, posted a behind-the-scenes image on Instagram that confirmed the former One Direction member shot at least one more scene that didn’t make it into the final cut.

In a new interview with Inverse, McHugh — who played the outwardly youngest-looking Eternal with the power to create illusions — has finally explained what’s going in this photo, which saw herself posing with Styles and Richard Madden (Ikaris) in matching silver robes. As fans had deduced, McHugh confirmed that this came from a version of the scene from the film’s beginning when the Eternals are “awoken” on their journey to Earth, centuries ago.

“I actually didn’t have a scene with him. [His scene] was a scene that was cut. It was parallel to the very first scene of us arriving on Earth. It was an alternate ending that didn’t end up working out. We shot it on the same day [as our scene], because it was virtually the same. It was the same shot. They were just switching out characters.”

Eternals Behind The Scenes Photos From Gemma Chan
1 of 9

McHugh went on to add that, though she didn’t get to share the screen with Styles in the movie, she did get to hang with him on set. And it sounds like he was a great presence to have around, as McHugh praised the Dunkirk actor as very outgoing and “really cool.”

“So I was shooting the first scene, he was shooting the last which ended up being cut. But we were on the soundstage, all of us together. Every time we were on break, we would talk. He was really cool. Some actors hide in their tents and want to be left alone, which is fine. You’re working, I get it. But he was like, ‘What’s up everyone? Let’s come in my tent.’ He didn’t want to be left alone.”

In the film as released, Styles’ Eros arrives on the scene when he beams on board the Eternals’ ship, which Thena (Angelina Jolie), Druig (Barry Keoghan), and Makkari (Lauren Ridloff) took into space as part of their mission to find more Eternals. Eros told them that Sersi (Gemma Chan) and the others had been snatched away by celestial boss Arishem, seemingly setting up a rescue mission to come in a prospective sequel.

A sequel to Eternals has yet to be greenlit, but it does appear that Styles will return to the MCU as Eros at some point. For the moment, Eternals can be streamed on Disney Plus.