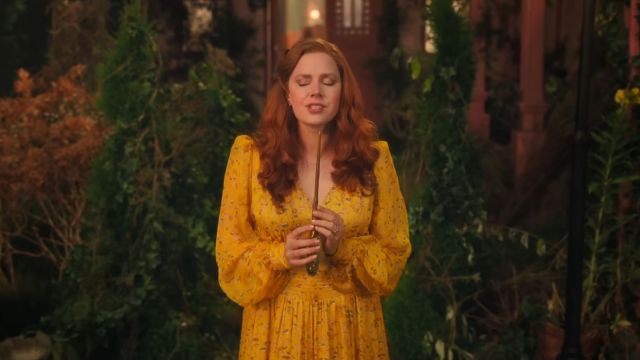 Disney Plus has finally released Disenchanted, a sequel to the 2007 film, Enchanted. The film features the same cast members from the original, yet introduced new characters in this fresh-faced fairytale story. Similarly, this film paid homage to multiple existing princess stories in Disney’s extensive catalog.

Enchanted was praised in the past for its satirical take on the traditional Disney princess story and showed how fantasy is different from reality. In Disenchanted, however, the film mashes all these fairytales into one cohesive story after Giselle (Amy Adams) wishes for a ‘fairytale life.’ The film made subtle and obvious nods to multiple Disney princesses, to the point that it managed to all fit together into one massive story.

So, just in case you’ve missed them, here is every Disney Princess reference found in Disenchanted.

To start simply, Sofia is the name of the newborn daughter of Giselle and Robert. Her name is based on the Disney Junior princess show, Sofia the First. Although this character didn’t have a major role in the film, it was quite a cute nod to the young children’s show.

Giselle’s wish to become queen during the start of the film’s climax was a simple nod to Aladdin, when Jafar wished to be sultan. And just like Aladdin (or at least in the live-action adaptation), Giselle’s wish only gave her the crown, but not the respect of the people or the guards. They still saw Malvina as their queen and began to flee once they realized they were in danger.

Not only does Queen Malvina look like the evil queen, but she also has a magic mirror. But, rather than beauty, Malvina seeks power since she wants to be the “most powerful of them all.” Maybe that’s why this evil queen has friends/lackeys. People feared her, yet want to be associated with her. Meanwhile, the one in Snow White only sought out beauty.

Three new members were added to Giselle’s household after she made her wish. They were three fairies, and their main role was to babysit Sofia while everyone is out and about. They also do some of the housework while Giselle continues to plot her way into power. While they aren’t “magical” per se, they act more like godparents to young Sofia while her family is away.

It was revealed that Morgan now sleeps at the top of the house at the tower. And when Giselle locked her in there, she snuck out by climbing out. The only difference is that she didn’t have long hair, but she instead used multiple sheets tied up to one long rope and managed to make her way down. Also, Morgan’s tower looks oddly familiar to the one in the Disney movie, as it’s covered with vines and plants. And just like both fairytales, the stepmother traps their daughters in the tower, claiming it’s for their own good.

Morgan has a solo number in the film, where the adults in town love her, but her peers do not. She almost dresses like Belle, only wearing a simple dress while others wear pretty dresses. And just like Belle, she longs for adventure rather than just being part of the common folk. What’s funny however is that Tyson almost dressed up as Gaston, except he’s not egotistical or vain. He actually cares about Morgan.

If you paid close attention to the ‘Perfect’ music video, that little splash of water is a short homage to The Little Mermaid when Morgan looks at Tyson in the distance. This was a small nod to “Part of your world – Reprise” when Ariel looked at Prince Eric in the distance. While Morgan didn’t have to sacrifice anything just to be with the guy she loved, she was the key in order to save him, her family, and her world.

Asides from the fact that Idina Menzel finally sings, the film didn’t promote “true love’s kiss.” Andalasia and Monroeville were saved due to “the power of memories.” This was something that was promoted in Frozen 2, when Elsa had to travel far north to find out how to save Arendelle. “Love Power” has multiple similarities when compared to “Show Yourself,” a track from Frozen 2. Morgan and Elsa both unlocked memories of the past in order to save the future.

Whoever realized that Giselle was Morgan’s stepmother and put two and two together when writing this film deserves a raise. Not only does Morgan live in an attic, but her stepmom abuses her. She even trapped her in her room, just like in the original fairytale. Luckily, Sophia was only a toddler or else she would have been an abusive step-sister. Not only that, but she also has an evil cat to do her bidding. Also, when Morgan was in Andalasia, her destroyed rags transformed similarly into a beautiful gown. The transformation sequence was similar to the one in Cinderella, when the fairy godmother gave her a new dress.

Another thing worth pointing out that its that it’s not just the original Cinderella story that this film paid homage to. Cinderella 3: A Twist in Time is also referenced in Disenchanted. Both evil stepmothers have a magic wand that they use for their own needs and make sure that their stepdaughter is out of their way.

Disenchanted is a film that managed to turn every fairytale story in existence into one cohesive story. It used every single stereotype that was commonly found in these tales, yet managed to find new ways for everyone to find their happy ending. And since this film was produced by Disney, it was able to reference its original princess stories alongside the common ones.

Disenchanted is now streaming on Disney Plus.