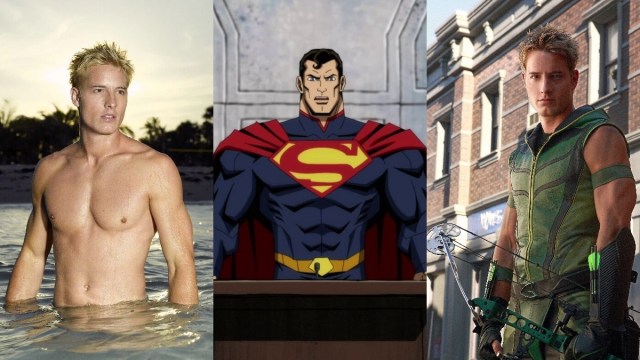 Plenty of actors have played superheroes for both Marvel and DC, and a select few have even suited up as a pair of costumed crimefighters for the same company, but Justin Hartley holds the unique distinction of playing no less than four of the most iconic figures DC Comics has at its disposal.

The This Is Us veteran led the line as Arthur Curry in the unsold Aquaman pilot from 2006 that went on to become something of a cult favorite, before getting his second bite of the cherry in Smallville, where he brought Oliver Queen’s Green Arrow to life for five seasons and 72 episodes.

Last year, he voiced both the Earth-22 and Earth-1 versions of Superman in R-rated animated video game adaptation Injustice, while he’ll complete the quartet as Batman in Spotify audio series Harley Quinn & The Joker: Sound Mind, alongside Christina Ricci as the former Harleen Quinzell and Billy Magnussen’s Clown Prince of Crime.

Speaking to We Got This Covered ahead of the release of Netflix’s festive romance The Noel Diary, we couldn’t help but ask Hartley how he ended up playing four of DC’s heaviest hitters, and he admitted there wasn’t any sort of grand masterplan on his part.

The same person bringing Aquaman, Green Arrow, Superman, and Batman to life across multiple different mediums is an impressive accomplishment, so now we’ll just wait and see if Hartley ends up lending his talents to the Flash to complete the quintet of arguably DC’s five most prominent male superheroes.