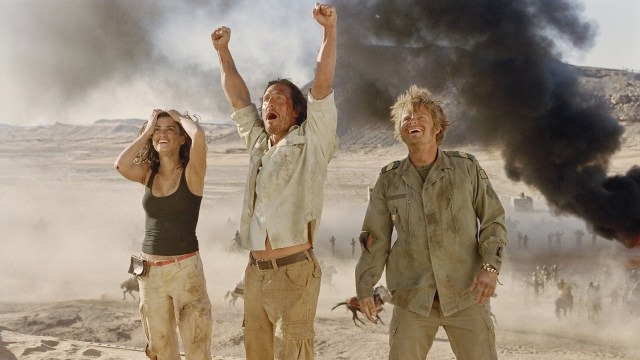 People all over the world love nothing more after a long, hard, and taxing day than sitting down, kicking back, putting their feet up and watching a movie, especially if it’s nothing more than undemanding and entertaining fluff that doesn’t require you to even think about thinking.

Sure, it’s all well and good to enjoy three-hour existential epics every now and again, but there are plenty of other (and entirely valid) occasions when you want to spend two hours of your time having fun. Whether it’s cult favorites, cheesy classics, guilty pleasures, or anything in between, fans over on Reddit have been naming the flicks they always return to when their brain is fully switched to its “off” setting.

It’s not exactly a shocking turn of events to see National Treasure being ranked so highly, when Nicolas Cage’s pair of implausible historical adventures continue to draw in new supporters a full 15 years since Book of Secrets was released. There’s a surprising amount of love for Matthew McConaughey, though, with the panned duo of Sahara and Fool’s Gold being put forward, which find the future Academy Award winner playing the shirtless hunk archetype that almost saw him typecast forever.

The fact that the mere mention of abysmal 2006 comedy Grandma’s Boy instantly finds the comments section devolve into a list of quotes ripped straight from the screen underlines that the Happy Madison effort retains a sizeable level of support among cinephiles, too, proving once and for all that one person’s trash really is another’s hidden treasure.