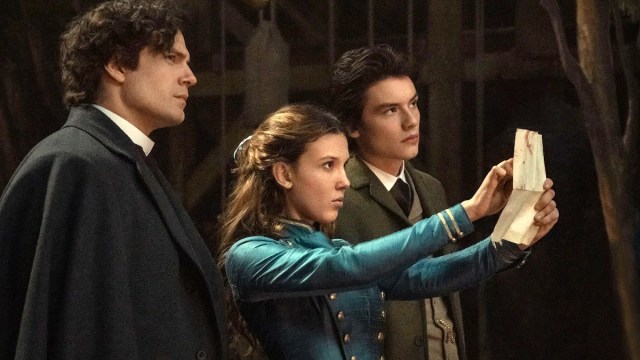 Reviews are in for the sequel to Millie Bobby Brown’s other successful Netflix franchise with Enola Holmes 2 finding the burgeoning detective return to our screens as she chases down a missing factory worker, only to discover this case is a lot bigger than anyone had originally thought. The first film was a charming adaption of the YA novel by Nancy Springer of the same name, but many critics feel that its follow-up loses its way in the murky mystery.

Brown is back as the title hero, high off of the success of her first case and now wanting to make a name for herself, only for people’s judgment of her age, sex, and affiliation with her brilliant brother Sherlock to impede any progress. That is until Bess (Serrana Su-Ling Bliss) seeks Enola’s help in finding the missing match factory worker Sarah. What starts off as a simple missing person case becomes a lot larger and ends up embroiling Sherlock (Henry Cavill), with the two siblings forced to work together to solve the mystery.

The reviews are a little mixed, with some touting it as a charming family adventure/mystery film whilst others feel that it’s a step down from its predecessor. Many find the case’s evolution to drive the plot rather meandering, with The Hollywood Reporter writing, “as the siblings’ paths cross with more frequency, Enola Holmes 2 swings and swerves in directions that interrupt the steady pacing. The whimsical meanderings only lengthen the film and, unfortunately, fuel our impatience for the end.”

IndieWire went very heavy on the lighthearted film, with their sub-heading reading, “this Netflix sequel could be subtitled ‘And the Case of the Too-Bloated Sequel.'” Ouch. Though their review picks out many delightful parts of the film, focusing on what the actors bring to their respective roles, they state that the motives of the main character is undermined within the storytelling,

“Despite Enola’s desire to escape the shadow of her famous big brother, her own film franchise fails to emerge from Sherlock’s lurking presence; in fact, it’s not at all clear that it’s even the intent. Co-star Henry Cavill makes for a dashing Sherlock and his scenes with Brown are adorable, but too much of the film is preoccupied with diving into his own life and profession (which has plenty of adaptations already, thanks).”

In fact, Cavill’s performance seems to have stolen the spotlight, something a little counterintuitive for a film about a heroine trying to escape her brother’s fame. The Guardian states, “it’s strangely Henry Cavill who once again steals the film as Sherlock. He might make for a physically well-suited yet otherwise rather bland Superman but when given something less sanded down and more idiosyncratic to play, he comes into his own.”

One review, however, from Collider, is very positive towards the sequel, stating that it avoids the pitfalls that many sequels fall into by calling back to the original too often, writing, “instead, the story builds successfully on the first, emphasizing what made it work so well, but also allowing these things to grow beyond their origins.” The review would seem to disagree that Cavill steals focus, adding “despite the large ensemble cast surrounding her, make no mistake that Brown carries this film on her own, and is a remarkably compelling lead.”

Despite some negative notes here and there, most seem to think that the film is an entertaining, if slightly forgettable, sequel to Enola Holmes. If they are to continue with a third film, maybe we could see Enola stand by herself, sans Sherlock, and dazzle just as bright if not brighter than her brother in a return to what the original movie was all about.

Enola Holmes 2 will be available to watch on Netflix from Nov. 4.