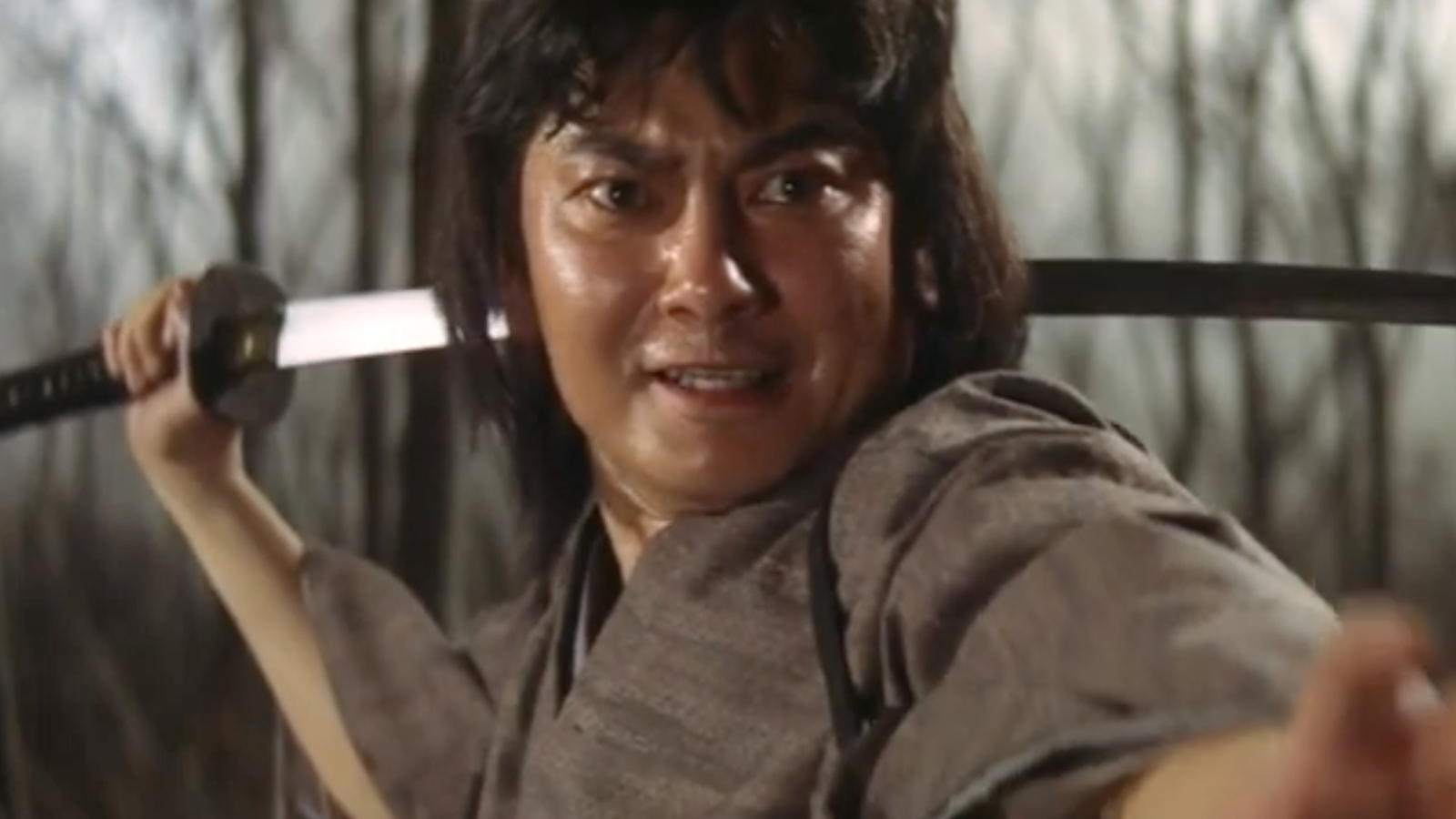 A list that can easily be 100 films long but has been painfully narrowed down to the top 10, here are the greatest samurai films of all time.

Let there be no doubt that this list was challenging to compile, considering a top 10 omits so many exceptional samurai films. Our favorites that didn’t make the list include Masaki Kobayashi’s 1967 film Samurai Rebellion and Takashi Miike’s 2010 film 13 Assassins. We also have 2 films that made this list that even surprised us. However, after careful consideration, we’re confident in the the final outcome and we hope you enjoy this countdown.

It’s no surprise that Toshiro Mifune is the star of this Akira Kurosawa film. Mifune was Kurosawa’s perennial lead, working with him on 16 films in which most were the main role.

In Yojimbo, Mifune plays a masterless samurai, known as a ronin, who wanders into a village where two clans are at odds with each other. Recognizing his skill, both clans wish to hire him but, instead, he ends up effectively pitting both sides more against each other.

Three years later, Sergio Leone’s A Fistful of Dollars was released and greeted with a major lawsuit from Toho, the film company that produced Yojimbo. Toho claimed the movie was an unauthorized remake of Yojimbo and, ultimately, the lawsuit was settled out of court.

Hiroyuki Sanada plays Iguchi Seibei who is a samurai simply trying to survive and raise a family. The movie, directed by Yoji Yamada, is unique in that it brings you into the life of a struggling samurai, making him extremely relatable, which no other samurai film has truly attempted to the extent of this one. The result is a critically-acclaimed film that became the first movie to win an astonishing 12 Japanese Academy Awards.

Prior to the final sequence, there is only one true moment of action from the main character and it only lasts briefly. However, those two seconds are so impressive that it makes the samurai’s ability believable while also reminding you that many samurai didn’t live in a time where they had to spend their life cutting down enemies but, rather, they lived a life being fully prepared for the rare moment that it may be required.

You would think a Kenji Misumi-directed film on this list would be from the Lone Wolf & Cub series or even the Zatoichi series and although they deserve mention, we couldn’t deny the uniqueness of this film.

Starring the remarkable Raizo Ichikawa as samurai Nemuri Kyoshiro, this film offers a story where Kyoshiro ends up being buddies with both an old man and a young kid. It brings out the best in Kyoshiro, who often meets characters that bring out the worst in him. The old man is a kind-hearted individual but, partly because of his high position in government, is under the threat of assassination.

This film series is an acquired taste which doesn’t always make for spots on a top 10 countdown, but the series ran for 14 films and this is an entry that stands out for many reasons, not the least of which is to see Kyoshiro’s sword technique known as the Full Moon Cut and to watch Raizo Ichikawa’s often-praised portrayal of a challenging character.

The last half hour of this movie makes it worth every bit of your time watching the entire trilogy. It’s a showdown. One final duel between the main character and his rival to perfectly end the saga.

The trilogy is based on the book Musashi by Eiji Yoshikawa, which was in turn based on the life of Miyamoto Musashi who is often considered the greatest samurai to ever live.

A strong performance by Toshiro Mifune and Koji Tsuruta make this film must-see viewing. Though the movie’s first half is nothing magnificent (and prevents me from ranking it the best in the trilogy), it’s worth the ride to the movie’s finale.

Directed by Kihachi Okamoto, Samurai Assassin is a fictionalized version of the assassination of Li Naosuke in 1860.

Based on the book Samurai Japan by Jiromasa Gunji, the movie excels in luring you in to its political intrigue while the final sequence sets a most stunning stage as a snowstorm slams the earth and several minutes of cinematic brilliance ensue. The most memorable visual takeaway you’ll likely get from this movie is actor Yunosuke Ito’s facial expression during its finale, which is a perfect conclusion to his outstanding performance.

This is the best adaptation of Shakespeare’s Macbeth that you’ll likely ever see.

Toshiro Mifune intensely plays the Macbeth character, named Lord Washizu in this feudal Japan version. Poisoned by ambition and blinded by the promise of power, Lord Washizu believes, thanks to misinterpreting a prophecy, that he will never be defeated in battle. The consequences of his false belief come to full realization in the final stanza.

Legendary director Akira Kurosawa presents this as a truly haunting tale that somehow darkens your spirit while watching it. Kurosawa accomplishes some outstanding shots in this film that help to enhance this version of the tale. It may not be sword-fighting samurai film, but that shouldn’t stop you from checking this out (especially around Halloween).

This might be considered a controversial choice to have the middle film of this acclaimed trilogy ranked higher than the other two, especially since the final film leads to a legendary one-on-one duel and the first film won the 1955 Oscar for Best Foreign Language Film. Thus, Samurai II often gets little attention even in many Samurai film rankings. That should definitely not be the case, however.

Directed by Hiroshi Inagaki (as was the whole trilogy), this film has numerous outstanding scenes, shows the true growth of our hero in the lead role, and introduces the main antagonist of the series. Koji Tsuruta portrays that antagonist, Sasaki Kojiro, with so much charisma that he might become your favorite character in the trilogy.

Overall, it’s an outstanding film from beginning to end, and is more “samurai” than the other two films in the trilogy.

Another film directed by Hiroshi Inagaki, the story is more commonly known as The Loyal 47 Ronin and this is its best theatrical version. If you’re unfamiliar with the story, a better title would be “A Long Wait for Revenge.”

Following the unusual events that lead to their master’s death, the 47 ronin begin to plan their revenge but they must disguise their true intentions, even to their former master’s wife, so as not arouse any suspicion from internal spies. As a result, they face scorn from her and others loyal to their deceased master.

A year and a half of planning all comes down to one night of revenge but whether or not they’re successful will depend on if they can find their target in time.

The Loyal 47 Ronin is one of the most celebrated stories in Japan, having been retold countless times over the last 250 years. Hiroshi Inagaki’s version is not the first cinematic version but it’s certainly the most impactful.

If the soul of the samurai is his sword, then this samurai has one cruel soul. He is completely unsympathetic to anyone in his life and is quick to use his sword on a stranger. The problem is that his skill is practically unmatched so who is going to stop this menace of a samurai, if dare he be honored to even be called that?

Tatsuya Nakadai’s incomparable performance is what I consider to be the most underrated portrayal of any villain on film. Of equal interest is that, despite his character, Ryunosuke — being the story’s antagonist — is the main character of the film.

One of the great scenes of Samurai cinema occurs midway when Ryunosuke witnesses a group of political assassins, a group he basically joined for fun, fail one-by-one in their attempt to kill another samurai (portrayed by Toshiro Mifune). The swift and snowy battle only happened because they had the wrong target. As Ryunosuke witnesses the slaughter, he becomes shocked of the skill of the samurai, making him realize that he is not unmatched.

The movie partially follows a young samurai who seeks revenge on Ryunosuke, opening up other subplots that build enjoyably. Director Kihachi Okamoto presents a gorgeously haunting film which, for this particular tale, cannot have been more stunningly filmed.

The movie’s only flaw is that it doesn’t have a true ending. In fact, it literally ends mid-fight. This was due to it being the first film of an intended trilogy that never got realized. If you prefer to see what happens though, one can watch the Satan’s Sword trilogy from a few years earlier, which is the same story (both based on the novel The Great Buddha Mountain Pass by Kaizan Nakazato).

In many aspects of its presentation, the movie is so superior to the seemingly endless selection of samurai films that, despite the way it ends, it’s still considered a masterpiece.

Legendary directory Akira Kurosawa’s ultimate tale of a village that hires seven samurai — paying them only with rice — to protect them from bandits, this extraordinary film has sparked remakes such as The Magnificent Seven and sparked the idea in film of building stories around characters coming together for a single honorable purpose.

It’s not only considered by many to be the greatest samurai film ever made but is also considered one of the greatest movies of all time, often ranking high on any significant list. It also has a perfect 100% rating on Rotten Tomatoes based on 90 reviews.

Scripted by Kurosawa along with Shinobu Hashimoto and Hideo Oguni, the story allows us to be introduced to each of the samurai one-by-one naturally. Each character has their own journey, their own past, and their own destiny. The movie brings the viewer into battle preparation, as we get to know the village along with the samurai and understand their strategy of how to defend it. Then, we get to see that strategy in action.

The actors all offer unforgettable performances. Takashi Shimura portrays the lead samurai, calmly rubbing his head in thought while attempting to find others willing to defend the village and eventually concocting the battle plan. Toshiro Mifune plays the crazy samurai and brings us one of the films’ best scenes while also having the green light from Kurosawa to ad-lib, a decision that pays off numerous times including when Toshiro hilariously imitates the villagers after they react to the warning bell.

Daisuke Kato, whose character is the first to truly connect with the leader, becomes an integral piece of the puzzle. Seiji Miyaguchi portrays the most skilled samurai of them all and becomes the idol of the youngest of the samurai, portrayed by Isao Kimura whose character also has a sneaky romance with a villager.

Then there is the outstanding acting of Minoru Chiaki, who brings a joyous smile to the film along with the warm-hearted but rugged-looking Gorobei, played by Yoshio Inaba.

A masterful script, superbly shot, and wonderfully acted. It has influenced generations of filmmakers and will continue to do so for as long as movies can be made.