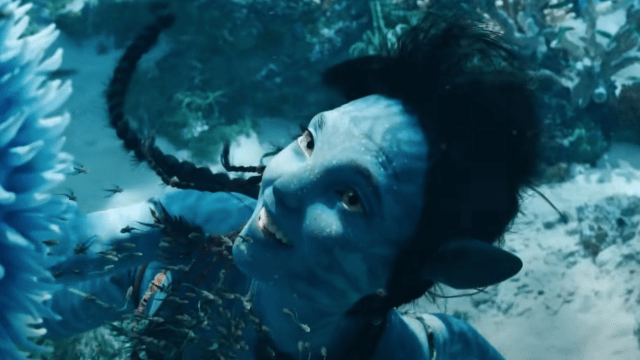 We’re fairly certain that the Avatar: The Way of Water embargo hasn’t lifted yet, mainly due to the fact that we’re even more certain the embargo hasn’t been declared yet. Whatever the case, James Cameron‘s sequel has received its first public reaction, and it’s in the form of glowing praise from Cameron’s longtime friend Guillermo del Toro.

The horror master wasted no time in getting straight to the point, dubbing The Way of Water “a staggering achievement” for his friend, with nary a hint of reluctance in his language as he goes on to praise what sounds to be an uncontested spectacle in the realm of genre fiction, or perhaps even cinema as a whole. He ended the endorsement by calling the film an example of Cameron being “at the peak of his powers.”

Perhaps their friendship places him in bias territory, but it’s nevertheless a surefire thumbs-ups from del Toro, and there’s a palpable sincerity to his words; which we don’t imagine he’d be using at all if the film didn’t strike the right chord.

It’s a promising step forward for The Way of Water, which was reportedly made on a budget of at least $350 million, which in turn translates to a daunting upcoming battle with the box office.

Regardless, del Toro’s words seem to be having the intended effect.

We’re still about three weeks out from the film’s theatrical release, so it’ll be a couple more sleeps before even more reactions start rolling in; hopefully the critics are just as enthusiastic as del Toro is, lest Cameron may be faced with tearful abandonment of his future passion projects.

Avatar: The Way of Water releases to theaters on Dec. 16.