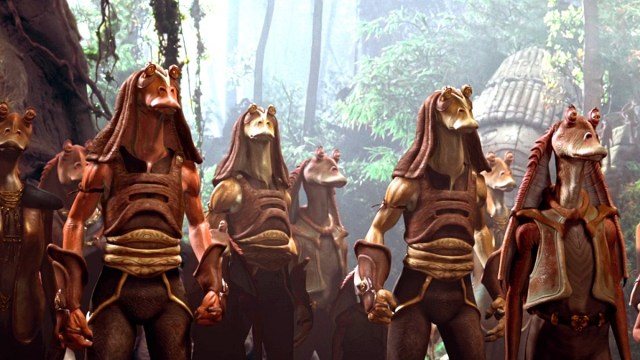 Thanks entirely to the existence of Jar Jar Binks, Gungans have been getting a bad rap among the Star Wars fandom for 23 years, with the wildly polarizing and excruciatingly unpopular addition to The Phantom Menace having tarred an entire alien species with the same brush.

In the eyes of some longtime fans, though, this simply will not do. You may be surprised to discover that there are a large number of Gungan sympathizers out there, and they aren’t best pleased at one solitary character leading to the entire population being derided and decried at each and every turn.

Jar Jar does make a point of saying he’s been exiled, while supplementary Star Wars content from the old Expanded Universe has filled in some of the gaps in Gungan history and tradition. In terms of a live-action setting, though, anytime anyone sees anything that even remotely resembles Ahemed Best’s digital creation, you can almost hear the eyes roll.

Is it time for a Disney Plus spinoff series or feature film set in, on, and around one of Naboo’s underwater cities that goes out of its way to give the Gungans their due? Probably not, because there’s hardly going to be a huge number of the general public either interested or demanding such a thing to exist.

#JusticeForGungans likely won’t gain a ton of traction, either, but it’s nonetheless interesting to see Star Wars supporters rally round an entire race of amphibious aliens that have been shunned by the larger fandom for almost a quarter of a century, based solely on how badly folks reacted to Jar Jar back in 1999.