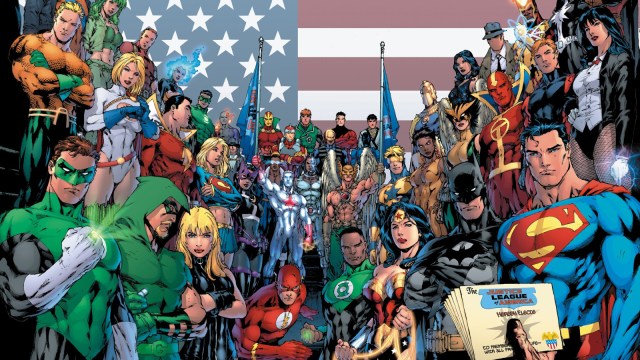 Comic book fans around the world were very upset following the news that Batgirl was going to be canceled and not even released for streaming on HBO Max. Fans were looking forward to seeing Leslie Grace take the screen as the iconic character and Michael Keaton reprise his role as Batman. The fact that the studio was willing to put over $90 million into the film and not release it puzzled many fans. After seeing the turmoil going through the DCEU, fans are wanting to know what projects are still a go so that they know what to expect.

This is a controversial movie as lead Ezra Miller has made headlines a lot lately, and not for the right reasons. Even with all of the headlines made, Warner Bros. still has not cancelled the film… yet. That is still possible and a route to that is looking more and more likely as the studio recently said that they were considering cancelling the film. This has not been confirmed yet and for the time being the film is still a go for 2023. Should it stay on track, fans can expect to see a version of Flashpoint take place, one of the most popular DC storylines ever written. We will keep you abreast of any updates about the movie and the future of it.

Dwayne Johnson stars in the new superhero film that had been put on hold for some time and is finally going to be released in October of 2022. Black Adam, an antihero who grew up in Kahndaq, an ancient city, is imprisoned for five thousand years and is released into the new and modern world. Black Adam has an idea that justice is best served with violence, something that the Justice Society of America sees. They try to help him control both himself and his powers, and must work together when one of the strongest and most powerful villains comes to attack.

Shazam: Fury of the Gods

The first Shazam! proved to be one of the best comic book movies and is incredibly deserving of a sequel. The sequel will aim to focus on the teenage version of Billy Batson and his foster siblings who become superheroes at the drop of a hat. The team will have to work together in order to fight the daughters of Atlas. Fans can watch the movie starting on December 21, 2022.

Aquaman and the Lost Kingdom

Another slightly controversial movie — given the recent history of Amber Heard and the plea of fans all around the world to have her character recast — this movie is still on track to come out and there is no reason to believe it will be canceled. Fans of the DC world will be able to see a familiar face, Ben Affleck, return to the universe as his former character Batman again. The film is scheduled to be released on March 17, 2023.

Blue Beetle gets to boast the title of being the first superhero not in the Justice League or Suicide Squad to get his own single film. Xolo Mariduena has been cast to play the character that gets a superpowered exosuit from the alien Blue Beetle. The project is intended to be released on August 18, 2023.

Even though the first Joker film was marketed as a stand-alone film that would not be getting any sequels, the film was so good that there had to be another story that was told from it. Fans came out of the first film wanting more, with Joaquin Phoenix delivering a legendary performance of the character that fans have grown to love over time. Lady Gaga has also been rumored to play Harley Quinn in the new movie. Although much anticipation has been given to the movie, viewers will have to be patient for the release of it. Fans will be able to watch the sequel in theaters on October 4, 2024.

John Cena has pulled a Dwayne Johnson and transitioned from the world of wrestling to the world of acting seamlessly. The former wrestler starred in the first season as Peacemaker, and fans have loved watching him take the character on. James Gunn has confirmed that the second season is still being developed even with everything going on, although he has not given an exact release date for the second season of the show.

Robert Pattinson shined in his time playing Batman. Critics and fans alike all thought he delivered an amazing performance that garnered a sequel. Pattinson and director Matt Reeves look as though they will be plotting a trilogy with the character, something that fans will be elated to hear. The focus of this trilogy is to create a Batman-focused universe that is not at all attached to the DCEU. Fans can rest easy knowing that many of the cast members that the trilogy would need in order to be the best version of itself have signed contracts promising their services for an entire trilogy, should it go that long.

After the success of Birds of Prey, Jurnee Smollett is said to continue her role of Black Canary into something more. It looks like a Black Canary movie will be gracing theaters before we know it.

Having J.J. Abrams attached to the project is already a huge leg up. This would be an incredibly dark show about the character, who is already one of the darker characters in the DCEU. Unfortunately for fans, no release date has been officially announced, however the show looks to be heading in the right direction quickly.

Something that could come from Robert Pattinson’s Batman-focused universe is a Penguin series. One of the most iconic villains might be getting his own show, something that looks promising as the success of Joker has fans wanting more and more villain origin stories. Colin Farrell will play the titular villain in the series that will be released on HBO Max.