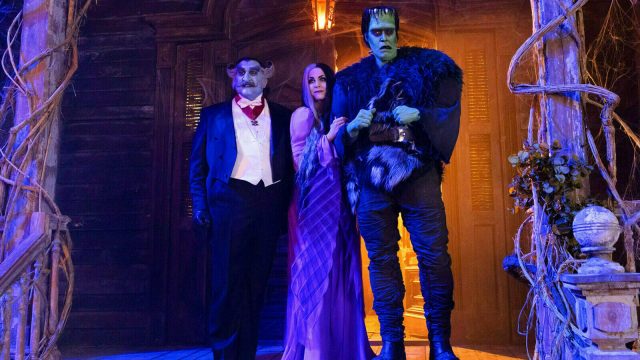 The Munsters are coming! Rob Zombie’s reboot of the classic 1960s sitcom based on the tropes of the original Universal Horror movies is heading for, well, at least Netflix, maybe.

Fans aren’t quite certain what to think following the release of the film’s trailer, with many not really able to wrap their heads around the filler that seems to dominate the upcoming reboot’s ambiance, acting, and overall feel. The trailer seems to set up a prequel to the sitcom that inspired the film in the first place with long-time married couple Herman and Lily Munster now being portrayed as a pair of singles looking for love and Grandpa AKA The Count as something of a domineering parent to Lily. If you haven’t seen it yet, check out the trailer for Rob Zombie’s The Munsters below.

In any case, the movie has a couple of built-in audiences and hardcore Rob Zombie fans and fans of the original series are certain to have at least a short look at the finished product as will, no doubt, looky-loos betting on the film to be either a schlocky disaster or a high camp masterpiece.

Whether it’s the former or the latter, here’s our field guide to where you’ve seen the cast of The Munsters before.

Although he’s been working with Rob Zombie since 2009’s Halloween II remake, fans may not recognize him without the signature facial hair he often sports in Zombie films such as 31, 3 From Hell, and The Lords of Salem. Phillips was unrecognizable in his best-known role, the Caveman Maurice in a famous series of Geico commercials and the short-lived Cavemen sitcom, where he acted alongside comedian Nick Kroll.

Sheri Moon Zombie is director Rob Zombies leading lady, muse, and IRL spouse. She’s arguably best known for her portrayal of “Baby” Firefly in her husband’s best-received movie, The Devil’s Rejects, but she’s appeared in every one of Rob’s feature films including Halloween, Halloween II, House of 1000 Corpses, 31, 3 From Hell, and The Lords of Salem, not to mention most of the music videos Zombie has made for his solo music career. The couple will celebrate their 20th wedding anniversary this Halloween (of course).

Daniel Roebuck as The Count / Grandpa

Where haven’t you seen Daniel Roebuck? The character actor will be known to Gen X arthouse fans as the violently asocial John from Rivers Edge but the Greatest Generation and Baby Boomers will easily recognize him for his stint as Andy Griffith’s investigator on Matlock. Roebuck played Jay Leno in the notorious late-night talk show wars dramatization The Late Shift. He also played the irascible junior high school science teacher, Dr. Arzt, in nine episodes of Lost. Like his principal co-stars, Roebuck has acted for Rob Zombie in several of the director’s films including The Devil’s Rejects, Halloween, Halloween II, and 31.

Character actor Richard Brake is likely well known to audiences on both sides of the pond, having appeared in guest and recurring roles in several UK television comedies and dramas. He’s known for playing heavies and played Joe Chill, the man who guns down Thomas and Martha Wayne, in Christopher Nolan’s Batman Begins. Star Wars fans will remember him as Valin Hess, the Imperial Officer gunned down by Bill Burr’s Migs Mayfield in the penultimate season 2 episode of The Mandalorian. But his greatest claim to fame is playing The Night King, leader of the White Walkers, in HBO’s Game of Thrones.

McCoy is known for his physical comedy act in his native country and may be recognized by some fans as the man who played the wizard Radagast the Brown in Peter Jackson’s Hobbit trilogy, but his most well-known role is undoubtedly the seventh incarnation of the Doctor in Doctor Who. McCoy was the last actor to play the Doctor in the original series run, playing the role from 1987 until 1989.

Garcia spent six seasons as Jerry Ortega on Hawaii Five-0 but his greatest claim to fame is still his six-year run of playing perennial nice guy Hugo “Hurley” Reyes on ABC’s sci-fi hit series Lost. Garcia also made an appearance on the latest season of The Masked Singer as the Cyclops, but was eliminated in the third episode.

Peterson would need no introduction if she was appearing in The Munsters under her more common stage name. As Elvira, Mistress of the Dark, Peterson is known to horror and B-movie fans all around the world for her career in hosting creature features on her Movie Macabre television show, not to mention her own movie, Elvira: Mistress of the Dark, and countless appearances as the character in comic books, action figures, toys, and home video.

Butch Patrick as Tin Can Man

Although he only appears in a cameo in the rebooted film, long-time Munsters fans will almost certainly recognize Patrick as the actor who played the original Eddie Munster in the original series. Eddie won’t have a counterpart in the reboot, however, as the movie tells the story of his parent’s courtship before he was born.