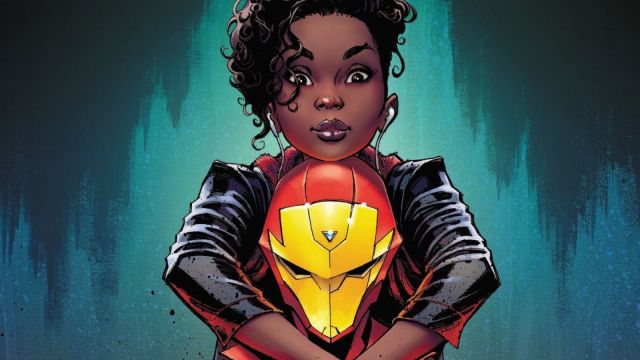 So much of Black Panther: Wakanda Forever has been shrouded in secrecy, and fans have been reliant mostly on leaks to get glimpses at the new film. Well, Today is no different.

Marvel is going big on the legacy heroes, with Sam Wilson replacing Steve Rogers as Captain America, She-Hulk sort-of replacing Hulk, and now Ironheart in place of Iron Man. So far, the only peeks at the newest Marvel hero have been from very small glimpses, but a toy could give us our best look yet at the hero.

Spotted in a department store, a three-pack of Wakanda Forever action figures sees Shuri, Namor, and Ironheart in full-costume. Ironheart’s upgraded suit looks to be heavily based off the Extremis Iron Man and the first Ironheart comic costumes.

Curiously, the purple suit for Shuri now throws some doubt into her taking up the mantle of Black Panther. Letitia Wright’s character has been long predicted to take up the suit, but fans have also discussed other options like M’Baku, Okoye, and Nakia. Wright has been a slight figure of controversy, with her alleged anti-vaccine views reportedly holding up production of the sequel, although there’s nothing from Marvel to suggest this.

Ironheart, meanwhile, is also set for her own solo Disney Plus series. Currently shooting in Chicago and Boston, it has added several LGBTQ+ actors to its cast, including RuPaul’s Drag Race star Shea Coulee.

As for how she fits into the Black Panther sequel, all will be revealed when the film hits cinemas Nov. 11.