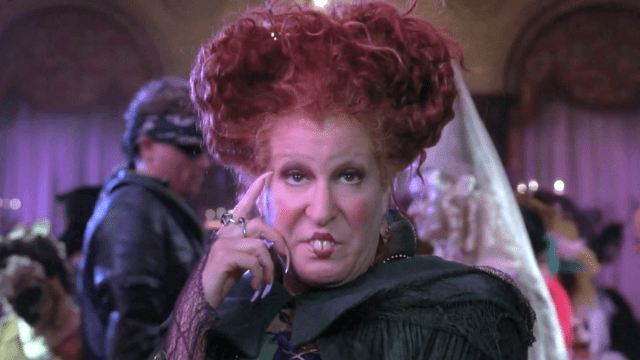 Later this month, the world will a long-awaited sequel when Hocus Pocus 2 premieres on Disney Plus. The sequel brings back much of the original cast, and, while it is not known how it will be viewed yet, Bette Midler is happy to have it done.

The actress and singer makes her views about the project known in a new article published by Entertainment Weekly today. She talked to the outlet alongside co-stars Sarah Jessica Parker and Kathy Najimy and says, for her, one of the highest highs of the experience is getting to revisit a character she loves for the first time, and now she can stand with others who have done so, too.

“I don’t know. I’m envious of other actors who have franchises, and I was hoping for a sequel to First Wives Club, but we never got that. After 30 years with no sequel to Hocus Pocus, I’ve always been envious of people who get to do their favorite character more than once. The fact that we got to do this finally, after 30 years of promoting the idea, I’m glad we got to do it.”

Later in the article, Najimy puts the failure of the first film’s theatrical release to it coming out in the summer and parents not being sure if it was a safe enough movie to bring their kids to. Parker adds she could not see a script before the movie started shooting, so she had to catch up quickly, and, at one point, Midler says they nearly showed the Sandersons did not die at all, but it got nixed.

“We also pitched [a scene about their purgatory period], that’s one of the things the three of us got together and talked about. Where have they been for the last 30 years? But, in the end, it fell by the wayside.”

Hocus Pocus 2 premieres Sept. 30 on Disney Plus. It follows a new group of teens trying to stop the witches who have once again returned to Salem on Halloween due to a new person managing to find and light the first film’s candle with a black and scary fire. In addition to the sisters, Doug Jones also reprises his role as Billy Butcherson, the zombie with a kind heart and some bad breath.