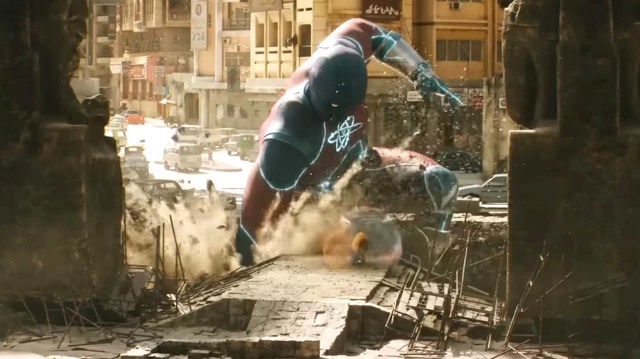 The atoms can now be satisfactorily smashed as Black Adam is here and so is Atom Smasher, one of the DCEU’s newest heroes. The film introduces the Justice Society of America, led by Hawkman, as they go up against the newly released Black Adam. The team consists of Doctor Fate (Pierce Brosnan), Hawkman (Aldis Hodge), Cyclone (Quintessa Swindell), and finally Atom Smasher (Noah Centineo).

The team is tasked with taking Black Adam down by The Suicide Squad‘s own Amanda Waller (Viola Davis). But unfortunately for the sometimes behemoth of a superhero, taking down Black Adam is Atom Smasher’s first mission. While his powers are fairly obvious, he can increase the size of his body tremendously, therefore, increasing his strength. But what is not as obvious is how he got his powers. So let’s take a look at Atom Smasher’s powers and what his origin story is in Black Adam.

What is Atom Smasher’s origin story in Black Adam?

Atom Smasher’s real name is Al Rothstein. As we previously mentioned, he can grow to the size of buildings and is extremely strong, and his first mission as a part of the Justice Society of America was to take down the newly released Black Adam after he was imprisoned for some 5000 years. Unfortunately for him Black Adam essentially has the powers of a god, and therefore the Justice Society ends up being no match for him.

But how exactly did he get these powers, which proved ineffectual against Black Adam? In an unusual twist, he inherited them from his uncle. In a scene where Al was being driven to Carter Hall aka Hawkman’s mansion, he called his uncle who was revealed to be played by Henry Winkler, whose brilliant performance might have been the second-best cameo in the movie. It was then disclosed that his uncle, also named Al, was a member of the original Justice Society.

In a later scene where he talks to Cyclone, Al mentions that he inherited his powers from his uncle. Other than that the only thing giving us an insight into his abilities is that throughout the film he was constantly eating, appearing in one scene with a bucket of fried chicken. This is most likely due to the energy he loses once he grows big, like when Ant-Man asked for orange slices in Captain America: Civil War.

They did a great job adapting Atom Smasher in Black Adam, along with the other members of the Justice Society, so let’s hope that we will see them again in the future. As for right now, be sure to go watch Black Adam in theaters to see Atom Smasher in all his fried chicken-eating glory.