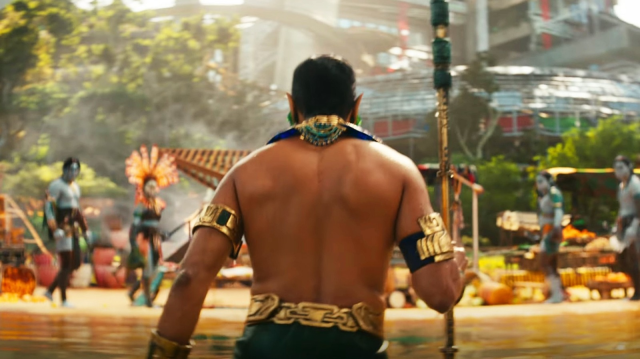 Black Panther: Wakanda Forever has finally been released. The sequel to Ryan Coogler’s previous entry in the Marvel Cinematic Universe, 2018’s Black Panther, deals with the death of Wakanda’s King T’Challa after the death of Chadwick Boseman. In addition to showing how the MCU and its characters dealt with King T’Challa’s passing, we also are introduced to some new characters led by King Namor of Talocan, played by Tenoch Huerta.

King Namor lives in his nation, Talocan, under the ocean. It is revealed in the film that like the Vibranium meteorite that landed at Wakanda, another meteorite landed near Talocan, underwater. After a team was caught trying to find Vibranium in the ocean, Namor thought the best course of action was to visit Wakanda. But instead of arriving at the border with an invitation and a gift card, Namor arrived in Wakanda undetected. So, let’s take a look at how exactly Namor managed to surprise Shuri (Letitia Wright) and Queen Ramonda (Angela Bassett).

How did Namor manage to breach Wakanda’s borders?

Near the beginning of Black Panther: Wakanda Forever, Queen Ramonda took Shuri to the edge of a river, to help her deal with her emotions surrounding the death of her brother, and how she was powerless to stop it. Namor appeared, emerging out of the river to both Shuri and Ramonda’s surprise. It is likely that while Wakanda has a number of defenses, as seen with their camouflage barriers and their border guards, they probably do not have strong underwater defenses.

Even if Wakanda had sonar, they would most likely be calibrated to pick up enemy vehicles, not expecting somebody to swim right through the border. Especially considering that people from Talocan can swim at superhuman speeds, meaning even if the Wakandans did pick up Namor swimming through the border, it would have been too quick for them to register, or too quick for the guards to stop him.

This could also be stretched to the next time Namor arrives in Wakanda in the film, when Talocan invades the country. Namor and several other people arrive in Wakanda via the water, and even though they might have been expecting an attack, they still arrived undetected. This might prove that Wakanda cannot pick up their movements underwater. It is also worth noting that whenever they move underwater, they seemed to be quiet, and they always snuck up on their enemies.

So essentially, Namor is a water ninja, although less graceful than a regular ninja, and far wetter. It will be interesting to see whether the stealth element of Namor’s powers play a role in any of his future MCU appearances. But for now, catch Namor and his high-speed swimming in Black Panther: Wakanda Forever while it is in theaters now.